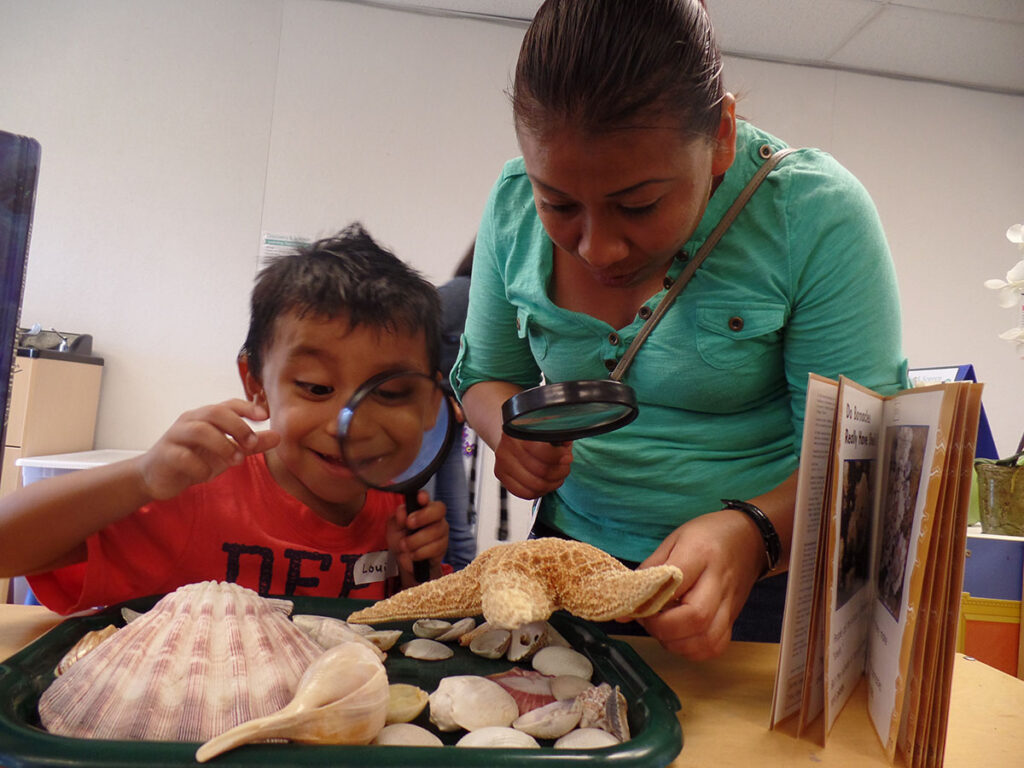 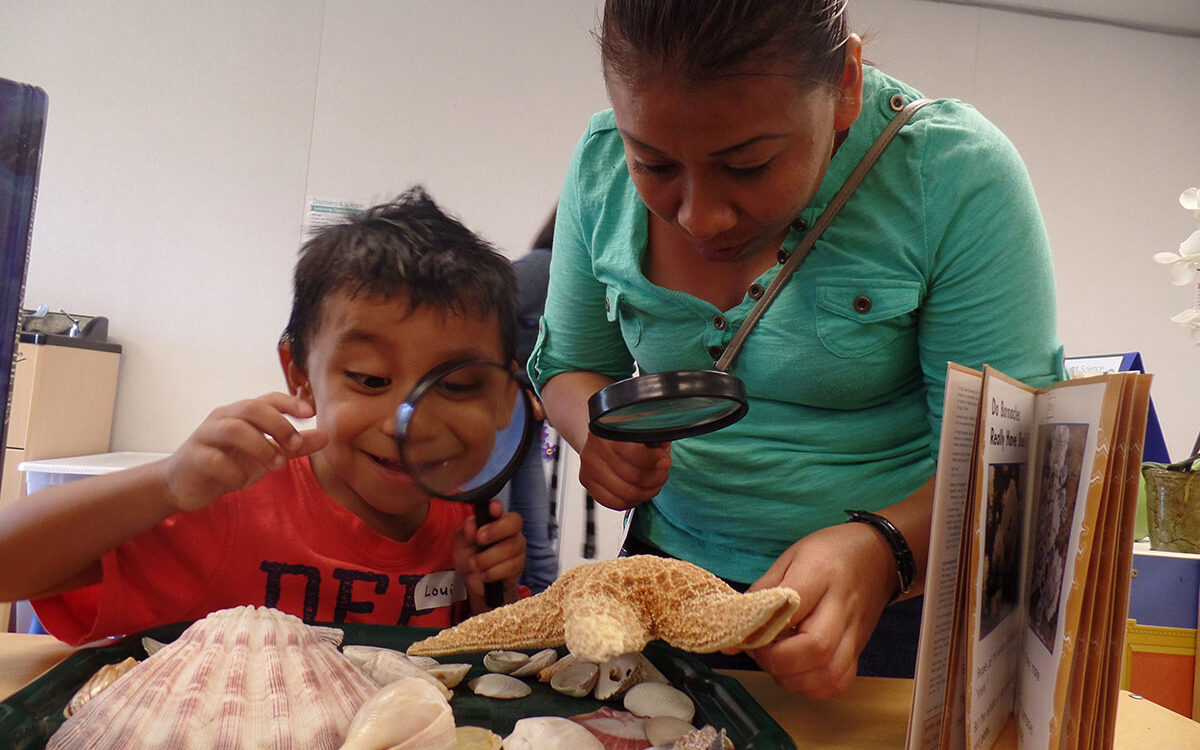 Selene Ramirez has a lot on her plate caring for her three children and two nieces who live at her home in Buena Park, near Anaheim, but she finds the time to spend 15 minutes every day with each child – reading, writing or working on crafts.

A few years ago, Ramirez, who came to the United States from Nayarit, Mexico, about 13 years ago, was unsure about how best to help her children and nieces – now ages 4 to 9 – prepare for school. But a twice-a-week parent-and-toddler class called the Early Literacy and Math Program, run by the nonprofit organization Think Together, gave her additional tools.

Family involvement is key to helping all preschool children prepare academically for kindergarten and beyond, experts say. But involving families like Ramirez’s, with parents or other caregivers who don’t speak English well, is especially challenging. Cultural differences and a lack of resources among the state’s approximately 50,000 early child care providers compounds the problem.

The term “dual language learner” is increasingly used to describe English learners to reflect the fact that young children from homes where languages other than English are spoken are typically gaining competency in two languages at once – their own and English.

Linda Halgunseth, a professor at the University of Connecticut who contributed to the report, said that if a parent can develop a strong relationship with their child’s preschool program, it will give them “the confidence and skills” to be involved in their child’s education throughout their school careers.

As the report pointed out, “strengthening dual language learner family engagement in preschool may be especially important, since the early years of development set the foundation for future learning, and since families who are engaged early on with schools are more likely to maintain engagement across future educational settings.”

However, the report noted that parents of English learners tend to participate in their children’s schooling at lower rates than English-only families.

Some notable programs focus on family involvement, including Abriendo Puertas, Families in Schools in Los Angeles and the Latino Family Literacy Project in South Pasadena. But they only serve a fraction of preschool-aged children in the state.

Many parents also have work schedules that prevent them from regularly participating in their children’s program. Some come from countries where it is not customary for parents to regularly volunteer in school programs. In many cases, immigrant parents have had little formal education in their home countries, which can make a school environment intimidating and anxiety-provoking.

Family at the Center, September 2015, Harder and Company and LA Partnership for Early Childhood Investment

Parents also may not realize that using their home languages for reading, speaking and playing can also help prepare their children for kindergarten. Halgunseth said parents’ languages should be seen as assets, rather than deficits.

On a very basic level, learning to read involves understanding the relationship between English sounds and letters. As a 2009 report for the California Department of Education noted, English learners “begin this process most effectively by first learning the English sounds that exist in their first language and then those that do not.” 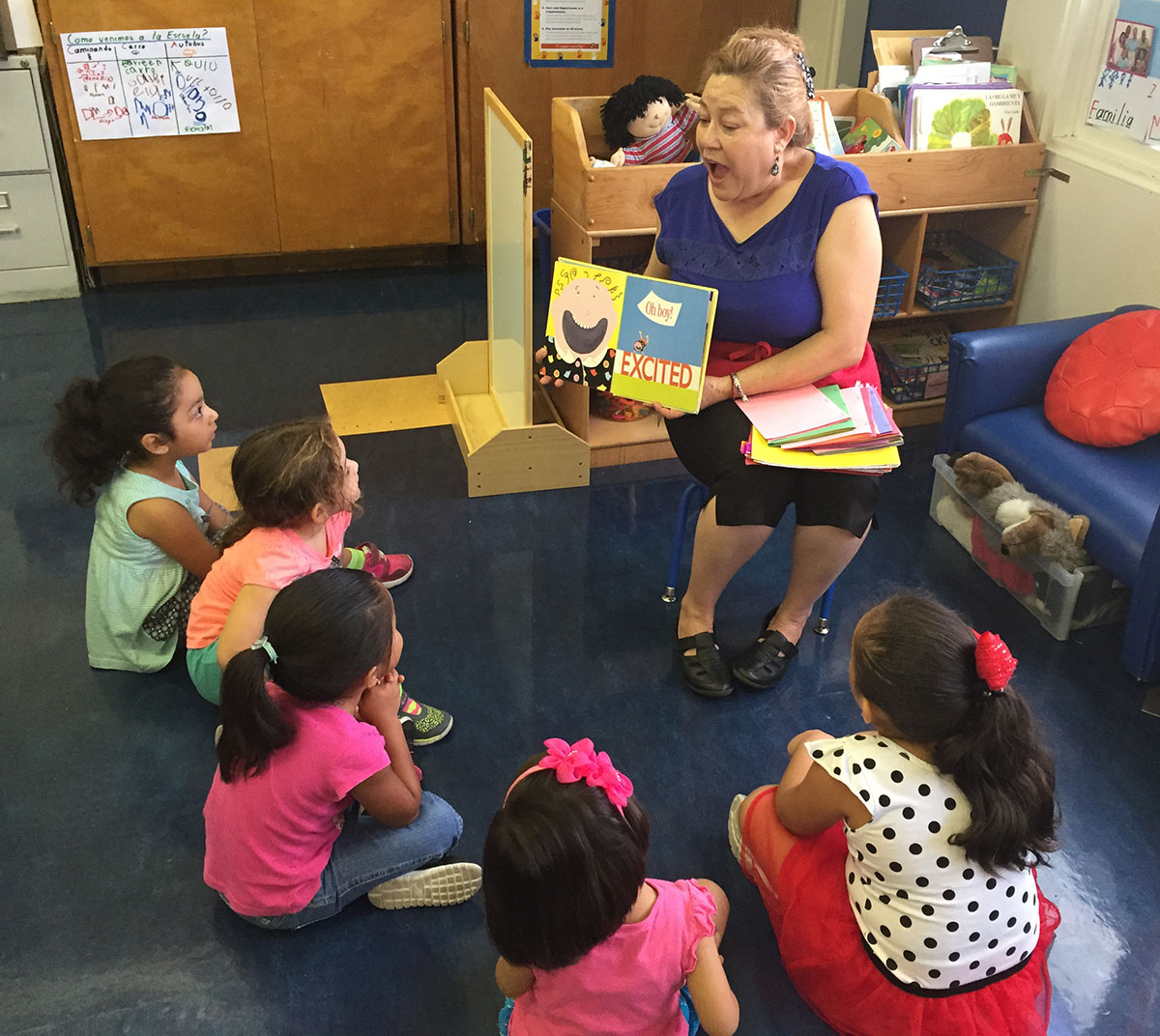 Early learner practitioners and advocates now prefer to use the term “family engagement” instead of parental involvement because so many immigrants, like the Ramirez family, have extended family members and grandparents who are actively involved in child rearing. The term also reflects the need for taking a more comprehensive approach to family engagement in general.

“We are moving away from the traditional view of parent engagement being defined as how many parents are coming to a meeting,” said Oscar Cruz, president of Families in Schools, which trains staff in school districts around the state to more effectively involve parents, including those of English learners.

Rather, the goal is to integrate family members into the school culture, including looking at how they are welcomed at the front office, workshops that they can participate in, what they can do at home to contribute to their children’s educational growth – to engage them in “shared leadership” with their child’s education.

A key part of engaging parents and family members in preschools is to encourage them to contribute to their children’s educational growth at home – and to use their native language to do so.

How often parents read to their children is “a crucial piece of this puzzle,” said Bruce Fuller, a professor of education at UC Berkeley and the study’s lead author. “Some of these gaps are in place even before they start preschool.” 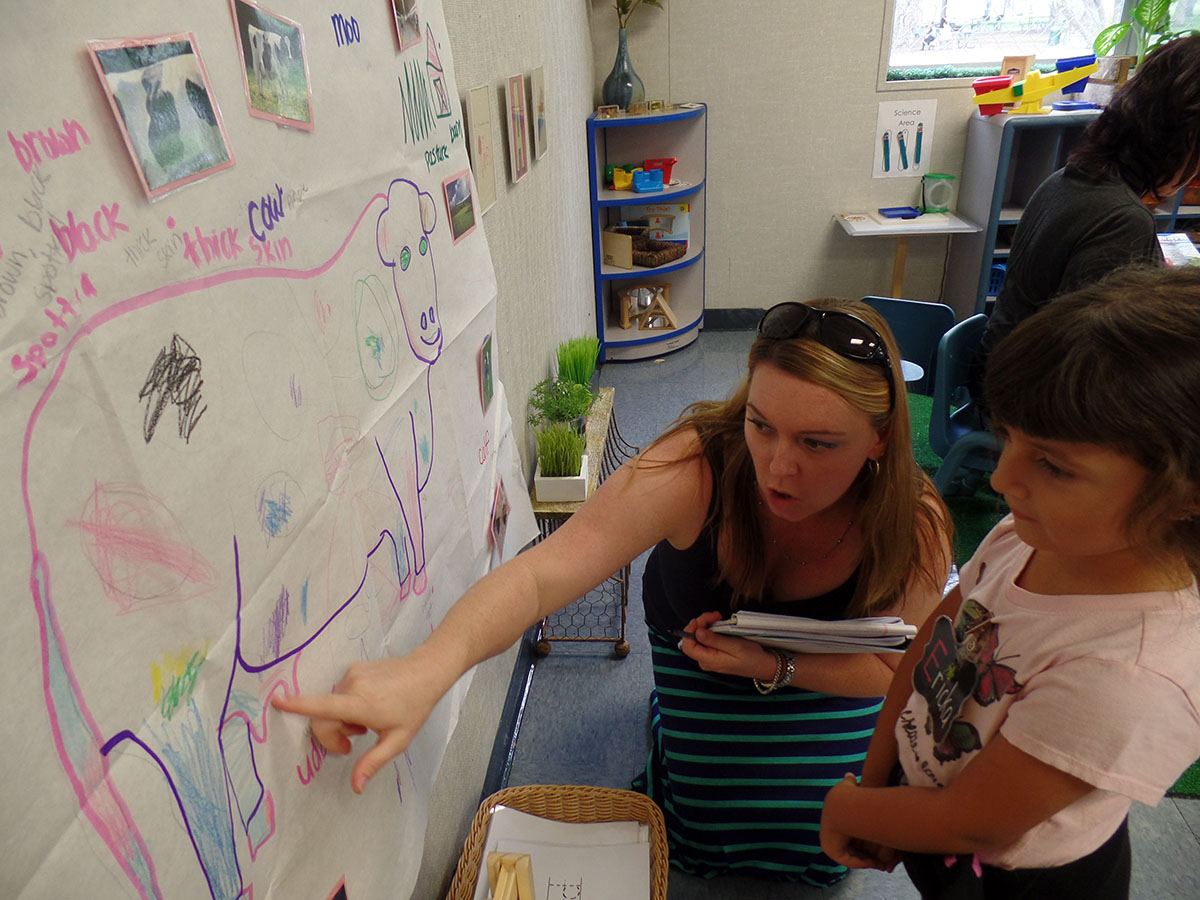 While the study looked at English-speaking children, the vocabulary gap is even larger among English learners, who are often from low-income families and likely to have less extensive vocabulary in both English and their native language.

The Early Literacy and Math Program is one attempt to address the vocabulary gap. While the free parent-and-toddler classes are open to anyone, many of the eight sites enroll parents and children who speak other languages at home. The Orange County program is funded by the Children and Families Commission of Orange County, which gets funding from additional taxes on cigarettes approved by a statewide 1998 voter initiative.

Each year, about 530 families go through the 15-week program that runs for a half day twice a week.

On one of the days, the parents or guardians attend classes during the day with their children, learning play and educational activities together. When teachers, AmeriCorps members who work there and parent volunteers are in attendance, the adult-to-student ratio is often 1-to-1. On the other day, parents take classes by themselves to learn strategies to help their children, while the 3- and 4-year-olds are in class with teachers and AmeriCorps members who work with the program.

Most of the lessons are in English, but staff members also use Spanish to give directions or explain activities, as necessary.

On a Wednesday morning last fall, 14 children and their parents or caregivers did activities together, such as tracing their names, counting buttons and sparkles, and making letters with Play-Doh.

When they gathered on the carpet, the teacher went over the children’s names, stressing the first letter in each, “D, D, D, Delilah.” Children shouted “absent” – a new vocabulary word – if a child wasn’t there.

Before reading a book, the teacher showed the front, the back and the spine. Then she directed the parents to point to their children’s spine, rubbing their backs.

The class has a lending library with bags of books, both in English and Spanish, which go home with the children every week. If the parents don’t know the language, the teachers show them how to “picture read” – tell a story by looking at the pictures. The families then have homework – the children draw pictures and the parents write what it is in their home languages. The parents present their work during the adult class.

Kenia Hernandez said she found the Buena Park program so helpful that she enrolled for a second time with her 4-year-old son, Louis Parra, his first time in preschool. Last year, he didn’t speak any English, but now he does, his mother said.

“More than anything, I like the parents’ class,” said Hernandez, who also has two older boys, in Spanish. “It helps me with my other children.”

Ramirez, of Buena Park, is in the class for the third time with her son, Geovanny, 4.

She lives with her sister, her sister’s two children and her own three children. The class has helped her with a routine for all five children, for whom she cares daily. Geovanny also attends Head Start classes in the morning. Ramirez said he speaks better English than when he started the Early Literacy and Math Program.

“Sometimes he translates for me when we go to the store,” Ramirez said.

“For children, it’s important they have a good start and experience in school,” Halgunseth said. “It’s also really important that family members have that when they first start interacting with educational settings.”

Families in Schools offers four-hour workshops to help staff create a welcoming environment, including for immigrant parents who may not be fluent in English. One goal, Cruz said, is to help staff to see parents as assets and to shed a plethora of negative stereotypes, especially of immigrant families. Cruz said he has heard comments like “parents don’t care; they are immigrants, they don’t know the system; they don’t care about their kids’ education.” Or he will hear questions like “Why don’t they speak English?” or “Why can’t they learn English like everyone else?”

The challenge of engaging family members is immense, especially because many of the 50,000 providers of early learning care don’t have the capacity and staff resources to do so.

A recent report published by Harder+Company and L.A. Partnership for Early Childhood Investment noted that in Los Angeles County, which has the highest concentration of English learners in the state, “family engagement practices  – where they exist – are inconsistent and do not adequately support and engage families as partners.”

Helped by a federal Early Learning Challenge grant from President Obama’s Race to the Top fund, the state is pushing to improve the quality of preschool programs by expanding use of the Quality Rating Improvement System in early learning centers and programs.

Cruz said it is important that family engagement be a key element in the rating system, which is being promoted by 17 “regional leadership consortia” and programs in 14 other counties, many led by First 5 Commissions there.

“A condition for what is required to ensure that kids are ready for kindergarten has to be based on whether preschools are prepared to partner with parents to support student achievement,” he said.