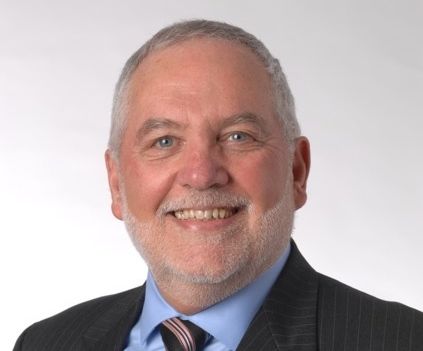 Dean Vogel is the outgoing president of the 325,000-member California Teachers Association, the state’s largest labor union. Before becoming CTA president in 2011, Vogel served as the organization’s vice president and secretary-treasurer, following more than three decades as a teacher and counselor in  the Vacaville Unified School District in Solano County. He will step down in June, when current CTA Vice President Eric C. Heins will take over.

The following questions and answers have been edited for length and clarity.

Does the CTA support the Common Core State Standards?

Absolutely! We are 100 percent behind the Common Core.

But it’s important for you to understand that that is really a significantly different statement than “We are 100 percent behind the Common Core as it is being presented in many of the districts around the state of California.”

Additionally, there is, more often than not, a substantive difference between what the Common Core is and what it’s being portrayed as. …and that is why you will find so many teachers around the state saying things like, “I hate the Common Core.” And, at the same time, you’ll find teachers saying, “Oh, my gosh! The Common Core is such a relief.”

The State Board of Education adopted the Common Core in 2010, and very shortly thereafter, in some districts, the superintendent and the chapter president got together really early and said, “We’ve got to figure out a way to help our faculties deal with this issue. Let’s start planning how we’re going to go about doing that.”

So there was a joint labor-management collaborative effort, where, at the building level, at the elementary schools, at the middle and high schools, the faculties were working collaboratively. We were given time during the duty day to do this work, or paid for extra time outside of the duty day to actually look at the Common Core, look at existing curricula, make determinations about what’s going to work, and make recommendations about potential programs that either could be bought or give them the time to develop curricula.

When I go into those districts and talk about the Common Core, teachers say things like, “I’m just so grateful that I’m finally getting the chance to be the pedagogical decision-maker in my own classroom, and that I’ve had the opportunity from the ground floor to build this curriculum.”

So compare that with what (other) teachers are being given. They’re being handed curriculum that they’ve never seen before, that they’ve had no hand in putting together. They’re giving benchmarked tests, being used not for them to differentiate instruction, but for them to identify who are the kids that are below the proficiency line… and groom them so they’ll be better test-takers. And they’re saying, “Well, the Common Core is no different than all the nonsense that I’ve had shoved down my throat.”

…It’s not surprising that half of the teachers would say they hate the Common Core. In the last 15 years… teachers have increasingly been told not only what they have to teach, but how to teach it.

We’re all victims of the culture that we’ve been complicit in developing, that basically says, “Somebody high above is going to judge us based on the way our kids perform on a standardized test.”

Do you have any idea what percent of districts have been so thoughtful and proactive, as you describe?

Very, very few. Out of the thousand or so districts in California, this might have happened in just 25 or 30 of them. And so what happened, what we did organizationally, about four years ago, by using some of our own resources and getting a grant from the National Education Association, we put together a Common Core training at our summer institute.

It basically says to the professional, “We trust you to be the pedagogical decision-maker in the classroom. This is where we think kids should go. You decide how to get there.”

It seems that many critics of the Common Core are really more opposed to the testing culture you cite.

You know, I sat with the secretary of education, Arne Duncan. As the new president of CTA, the word around the place was I was this new thinker, and Secretary Duncan was courting me, and we had a lot of opportunities to talk one-to-one. I told him, in the very early days, “You have got to figure out how to separate testing from the Common Core. Education is not a race, you know. Kids don’t learn at the same pace, for crying out loud. Anybody who’s ever had more than one child understands that they grow at different rates, and they have different interests, and their curiosities spark over different things.”

He finally stopped talking to me, because I finally had to say, “Look. You just need to understand what you’re doing in the department is at best counterproductive. At worst, it’s destructive.” And we’ve been watching it unfold around the country since then.

And, to our good fortune, the difference in California is that the policy people are pretty much all lining up. The governor and the governor’s staff, the State Board of Education, the state superintendent of public instruction, the legislative leadership, the teachers unions… all of these different groups are pretty much all on the same page, that we’ve got to go slowly. We’ve got to first separate the development of curriculum based on standards from the development of the assessment, and we’ve got to bring it all together in a very thoughtful way.

Are teachers complaining of fatigue when it comes to learning the new standards? Do you hear any complaints specifically that there are simply too many standards?

“Too many standards” was really consistent with the old California standards that were a mile wide and an inch thick. There was just not enough time. I heard a lot more complaining about the old standards than I have about the new.

On the other hand, teachers are talking about being fatigued and overworked. They’re continually being asked to do more and more with less and less. We’re the eighth-largest economy in the world. We’re 47th in the country in funding. We’re last in counselors. Last in librarians. Last in class size. I mean it’s difficult to find a teacher who’s not fatigued and feeling overworked and disrespected, or at least under-respected.

I don’t think it’s as related to the new standards as it is just to the conditions of teaching and learning, due to the fact that we’re so severely underfunded.

The California Legislature authorized $1.5 billion last year to implement the Common Core. Will that be enough?

Here’s the predicament: Districts were given the discretion to use that money however they wanted. And let’s say a district knows they’re going to be using computer-adaptive assessments – and the most recent computers they have are old Apple IIe’s that are all stacked in a closet in the library. And they have no wi-fi connection. What are those districts going to use that money for? They’re going to be using it to buy hardware and bandwidth. And so that’s what happened with a lot of that money.

So the professional learning opportunities for teachers, which were absolutely essential if you really want to move thoughtfully and deliberately in implementing this, didn’t happen nearly to the degree that they should have happened. So, absolutely, we believe we need more money. But we also understand the reality of the situation we’re in, and that means that most districts are still needing infrastructure. So the best that I can say is that we’ve got to remember this isn’t a race.