We need resources and time 'to show that we can improve' 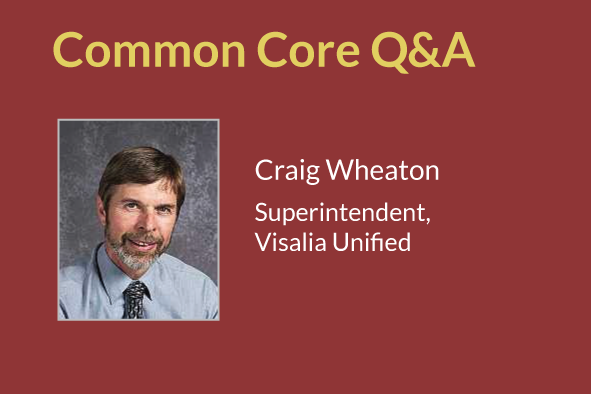 EdSource is conducting a series of interviews featuring educators’ experiences with the Common Core State Standards. Visalia Unified is one of six districts that EdSource is following during implementation of the new standards. For more information about the Common Core, check out our guide.

Craig Wheaton, superintendent of the Visalia Unified School District, talked with EdSource about some of the challenges and encouraging signs in his district. The following are excerpts from the interview.

What has been the most encouraging aspect of Common Core implementation in your district so far?

Probably the most positive aspect is seeing a number of teachers that are very excited again with what they’re doing, and are feeling that what they’re doing is the right thing to do, that the kind of instructional activities that kids are engaged in are more relevant and more motivational than in the past. I’ve been in and out of classrooms that, frankly, aren’t as boring. One of our big issues is motivating kids, keeping kids engaged and interested and understanding that what we’re trying to get them to do is relevant and important. It seems like during the last 10 years we’ve been telling them essentially “we know this is good for you, even though it is not that much fun to do.”

What has been the biggest challenge?

The biggest challenge is overload among adults, fear of what they’re doing, and the sense that everything is changing. It’s feeling overwhelmed and questioning what they’re doing and what support system the district is offering. The biggest obstacle is adults getting discouraged, not understanding really what the standards are and what kids should be able to do.

Is it asking schools to do too much after five years of a brutal recession and years of budget cutbacks?

If I were designing and implementing Common Core, I would not have arranged a recession to go along with it at the same time. But unfortunately no one could control that there was a recession. I was a little disturbed that the Common Core standards and implementation was thrown out there with not much direction and no resources at a time when we were losing resources with an expectation that “you’re just going to do this.”

How much opposition have you seen in your area?

We’ve actually floated along pretty well without too much interference. We’ve only had one really bad meeting, where an organized group tried to almost disrupt the informational meeting. At our last board meeting, for the first time we actually had a protestor who used their entire three minutes during the public comment period to make speeches, with a sign reading, “Don’t treat our children like guinea pigs.”

And the teachers’ union?

The teachers’ union is on board. They would say that they’re on board more than our district is. But not all teachers agree with the teachers’ union. Some are not on board. A few of our high school math teachers are probably the only ones that have been vocal against the Common Core.

Well, parents are kind of all over the map. I think they are basically on board, but we do have a contingent of conservative people who pay attention to the media and question us quite a bit. A bigger concern is about math. Not all parents understand what we’re doing because it’s not your basic 20-problem math homework practice sheet coming home any longer. I get a lot of questions along the lines of “I don’t know how to help my child in math with this new approach.” That’s probably been the area they’re most critical and cautious about. It’s going to take us some time but if we stay the course, in two or three years people are going to be much more comfortable with it. It won’t be the newest, latest thing that they’ll be seeing in their kids’ school.

How prepared are you technologically for students to take the Smarter Balanced assessments this spring?

We have a long way to go, but we’ve put tremendous resources into this since last year. During the statewide pilot tests we had some real glitches with our network, particularly in some of our older schools, and so we’ve learned a lot from that. We’ve done a lot to improve all of our connectivity throughout our district. But we’re not there yet, and as we go through the testing season this spring, we’re going to have new information on how prepared we really are. I think we’ll get through it fine, but we may have to make some adjustments (in how we administer the tests).

What do you need to make the Common Core succeed?

We need the resources and the time to be able to show that we can improve. I do fear the new accountability system could actually work against us. But luckily it looks like that’s not going to happen this year. It was a good move by the policymakers to give us a year (by postponing using the test scores to rank schools through the Academic Performance Index). Before we’re labeled as failing the Common Core, I would like some time to prove that we can succeed.