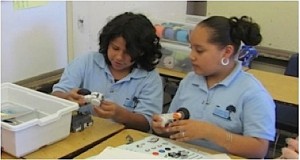 For the first time in the U.S., more district schools than charter schools are expanding the school day or year, according to a recent report. But the national trend does not appear to be catching on in California.

About 1,200 traditional schools compared with almost 800 charter schools offered either a longer school day or year in 2013-14, according to Learning Time in America: Trends to Reform the American School Calendar.

But in California, charter schools still far outnumber traditional schools in offering expanded days or year: 102 charter schools compared with 34 district schools, according to the report, which was released April 16 by the National Center on Time & Learning, a nonprofit advocacy and research organization based in Boston. Of the district schools, more than a third were in San Francisco Unified, according to the report’s database.

Many charter school organizations have traditionally required longer school days, which has been much less common with school districts.

In California, charter schools still far outnumber traditional schools in offering expanded days or year: 102 charter schools compared with 34 district schools, according to a report from the National Center on Time & Learning.

A school had to offer at least seven hours of instruction each day and have at least 30 additional minutes each day than nearby schools or require at least 10 extra days of school during the year compared to neighboring schools to be considered an “expanded-time school” by the center.

California requires schools to offer a minimum of about three hours for kindergarten, about five hours for grades 1-8, and six hours a day for grades 9-12. Most California schools are open 180 days a year.

“We were surprised at the rate of growth among district schools,” said Blair Brown, vice president for communications at the national center. In 2012-13, she said, 56 percent of expanded-time schools were charters. By 2013-14, 61 percent were district schools.

Nine-hour school day is the norm and a national model at Oakland middle school, EdSource, Feb. 9, 2014

Federal policy is part of the reason for the upward trend, according to the report, specifically the $3.5 billion invested in the School Improvement Grant program. That program encouraged increased learning time as a strategy to improve low-performing schools and “has helped to drive a policy trend that many districts and states have embraced,” according to the center.

In one example, a School Improvement Grant jump-started an expanded learning program at Elmhurst Community Prep, a middle school in a low-income neighborhood in Oakland, in 2010-11. After the grant funding ended, the school and its nonprofit partners were able to keep the nine-hour school day for three days each week by cobbling together other grants and relying on volunteers.

The National Center on Time & Learning report also chronicled the continued growth of expanded learning programs. During the past two years, the number of students in these programs has almost doubled from 520,000 in 2011-12 to 1.1 million in 2013-14, with most of the students living in low-income urban communities.

“We were excited to cross the 1 million threshold,” Brown said. “Once we’d crossed that threshold, we thought OK, this is really starting to happen.”