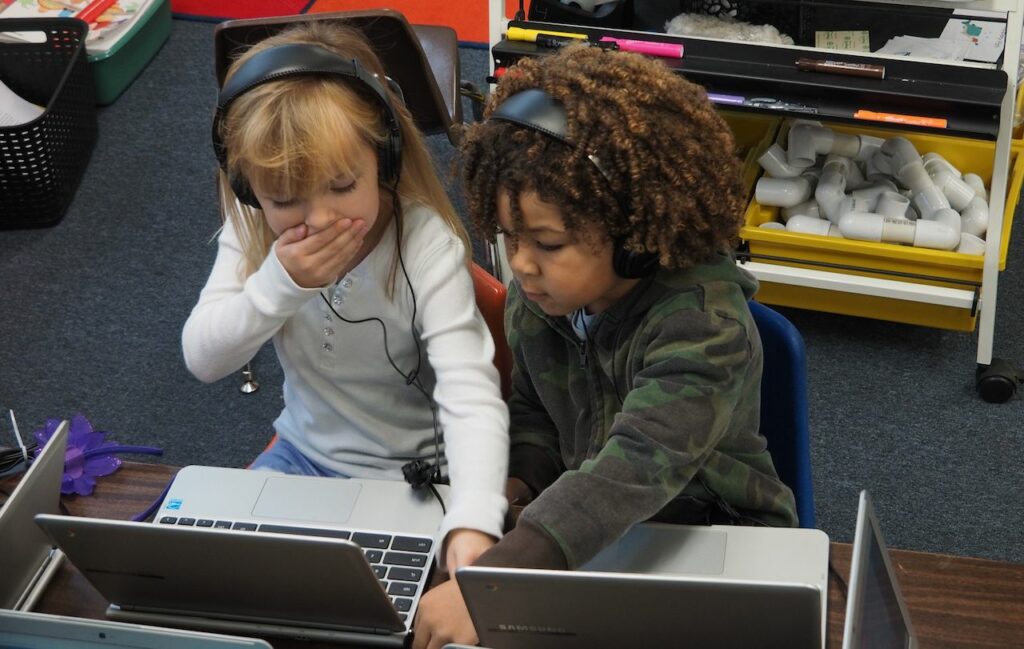 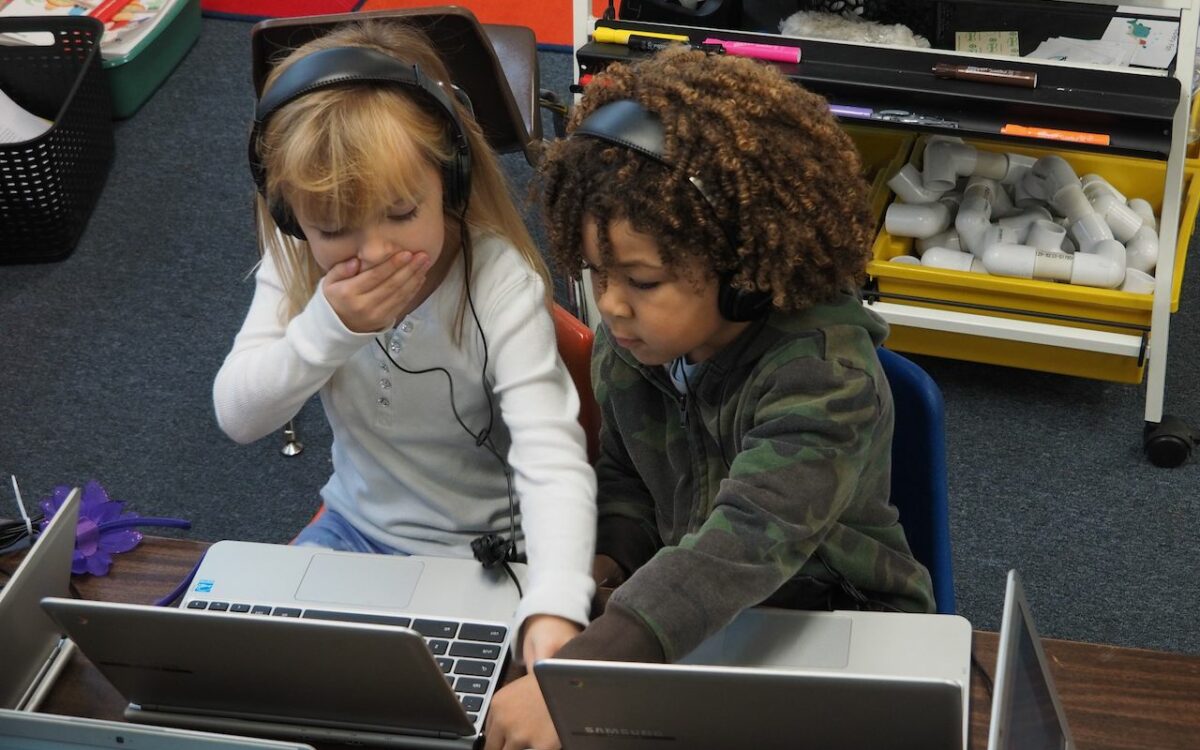 Whether solving math puzzles to help a penguin waddle across a computer screen or sounding out words in Mr. Sounders’ virtual classroom, K-2 students are increasingly embracing technology in California schools.

Mixing academic software programs with traditional classroom instruction – often referred to as blended learning – is moving from high schools and middle schools to the early grades, even reaching some 4-year-olds in transitional kindergarten. Teachers say the programs they are using adapt to the young students’ needs and give teachers time to delve more deeply into the reading and math concepts required under the Common Core State Standards.

“It’s almost like having another aide in the classroom, and they are learning to use technology,” said Cindy Shannon, a kindergarten teacher at Mitchell School in the Atwater Elementary School District in Merced. This year for the first time, she is using the iRead software program recently introduced by Scholastic for K-2 students.

“It keeps them moving, challenging them to work at their ability,” she said.

Interactive software offers visual clues, such as a big red ball, as students try to sound out B-A-L-L. If students are struggling, the program will go back, for example, to the sound of “L” to help them. iRead has students pronounce nonsense words to be sure they understand how to sound out letters in words they don’t recognize.

“It’s almost like having another aide in the classroom, and they are learning to use technology,” said Cindy Shannon, a kindergarten teacher at Mitchell School in the Atwater Elementary School District in Merced.

Some software programs, such as Spatial-Temporal or ST Math from the nonprofit MIND Research Institute in Irvine, focus on conceptual understanding in the guise of a game – helping a perplexed penguin overcome obstacles – that keeps students engaged in learning math.

Programs like iRead and ST Math adapt to the student, waiting until students have firmly grasped a concept before moving to the next. They help students who are behind catch up and offer a challenge to those who are ahead of the rest of the class, educators say. The programs also provide immediate feedback to teachers so they can see which concepts the class is struggling to understand and where there are specific holes in each student’s learning, such as a student not understanding patterns in math.

Computer programs provide children “what they need when they need it,” said Hilary Nguyen, who taught kindergarten math and science at Rocketship Alma charter school in San Jose. They also encourage children to keep trying if they make a mistake, developing the habit of practicing to learn, she said.

But some educators are skeptical.

“Learning through a computer at this age isn’t very effective,” said Joan Almon, cofounder and director of programs for the Alliance for Childhood, a nonprofit research and advocacy group based in New York that opposes the Common Core standards for the lower grades.

“What is most effective for children at this age is to be engaged with their whole body – three-dimensional learning like Play-Doh or painting letters,” she said. “In general, the flat-screen approach, however elegantly presented, is using fingertips instead of the whole hand and whole body. We want learning at this stage to go all the way down to their toes.”

In its report, “Facing the Screen Dilemma: Young Children, Technology and Early Education,” the Alliance says that the new technologies are adding to, rather than replacing, television time.

“What is most effective for children at this age is to be engaged with their whole body – three-dimensional learning like Play-Doh or painting letters,” said Joan Almon, cofounder and director of programs for the Alliance for Childhood.

Even those who are enthusiastic about the role that computers can play in learning offer words of caution.

“I would be skeptical of a program that requires significant screen time,” said Heather Staker, a senior research fellow at the Clayton Christensen Institute, a nonpartisan think tank based in San Mateo that promotes blended learning. “Plugging in children can be too attractive to adults. Little children need a lot of face-to-face love.”

But, she added, “technology can be used strategically and intentionally with time limits.”

Shannon at Mitchell School allows her kindergartners to be on the computer for only 15 minutes a day, learning letters, phonics and other pre-reading concepts with iRead. They have easily adapted to the technology, she said. They quickly learned to use the touch pad and had no problems responding to the prompts in the program.

The hardest part was teaching them to log in and hang onto their passwords. Shannon solved this problem by writing each student’s login name and password on a laminated Popsicle stick that sits neatly between the Chromebook’s keyboard and screen. She also has to regularly wipe the touch pads to keep them from getting too sticky.

Emma Anderson, a kindergartner in Shannon’s class, grabbed her Popsicle stick from her cubby and expertly logged in on a recent morning. She giggled and pointed as the avatar she created – a big-eyed girl with a blond ponytail tied up with a pink polka-dot bow – marched across her computer screen. The avatar headed to Mr. Sounders’ virtual classroom, where Emma, equipped with headphones, practiced sounding out letters by speaking into a microphone plugged into her Chromebook.

Michael Horn, cofounder and executive director of education at the Clayton Christensen Institute, said the use of software programs for reading and math in K-2 classrooms is “growing rapidly.” Shannon’s classroom is one of “many, many thousands, if not low millions” of classrooms in the United States that are introducing the practice in the early grades, Horn said.

Horn said there are no statistics available on where most of the growth is occurring in K-2 classrooms using blended learning, but that California is the “clear leader” in schools that have embraced that approach across grades and subjects.

Brian Greenberg, CEO of Silicon Schools Fund – a philanthropy based in Emeryville that provides seed funding for schools that use blended learning – sees California, particularly the San Francisco Bay Area, as “ground zero” in blended learning. He regularly hosts delegations from other states and countries interested in visiting Bay Area schools to see how blended learning is working at every grade level, he said.

More than half of the almost 406,000 K-2 students who use ST Math are in California, according to the institute. Scholastic just introduced iRead in 2013-14 for K-2 students, and about 125,000 students – including 26,000 in California – are now using the program, the company reports.

“Facing the Screen Dilemma: Young Children, Technology and Early Education,” Campaign for a Commercial-Free Childhood and Alliance for Childhood, 2012

Part of the appeal of the software programs is their reliance on visuals, making learning easier for English learners and students with dyslexia, said Laura Ryan, who introduced iRead in Napa Valley Unified in 2013-14 when she was the administrator for assessment and intervention for the district. She retired and later took a job as director of academic planning with Scholastic.

An assessment by Scholastic of the first year of the program in Napa Valley using DIBELS, a testing system developed by the University of Oregon, showed that 90 percent of 1st-graders who were below average in reading reached grade level or above after finishing 100 topics in iRead. Each topic focuses on a specific task, such as recognizing the uppercase letters A and B. And 35 percent who were far below average – which included 2nd-graders reading at kindergarten level – reached grade level or above after 100 sessions.

ST Math was developed by Matthew Peterson, a neuroscientist and cofounder of the MIND Research Institute. Peterson is dyslexic and did not learn to read until he was in 5th grade. The program is completely visual, using characters such as JiJi the penguin, who faces one obstacle after another that can only be removed by solving a math problem through puzzles. For example, in one puzzle for 3rd-graders, JiJi is riding a unicycle and students have to figure out how far the penguin has to roll to be able to get into a basket attached to multicolored balloons and be lifted into the air.

The research group WestEd found that California Standards Tests math scores were significantly higher for students across California in grades 2, 3 and 5 who were in schools that fully implemented ST Math compared to similar students who were not. The researchers found no significant difference for grade 4.

ST Math was first introduced in 2001. Erin Kominsky, principal of Weaver Elementary School in Los Alamitos Unified in Orange County, piloted the program in her school a year or two earlier. She is currently piloting a transitional kindergarten version for the institute.

“The beauty of the program is that it is very visual and nonverbal, especially for the transitional kindergarten and kindergarten kids who aren’t articulate,” Kominsky said. “They can journey through the program and be successful mathematically without needing language in any way.”