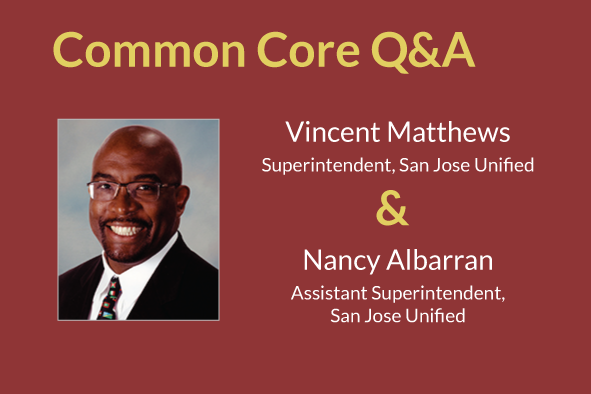 EdSource is conducting a series of interviews featuring educators’ experiences with the Common Core State Standards. San Jose Unified is one of six districts that EdSource is following during implementation of the new standards. For more information about the Common Core, check out our guide.

A Bay Area native, Vincent Matthews has been superintendent of the San Jose Unified School District since 2010. Before that he was the state-appointed administrator of Oakland Unified, an area superintendent of San Diego Unified and an educator in residence for the NewSchools Venture Fund, a venture philanthropy firm. Before becoming San Jose Unified’s assistant superintendent of instruction and director of the district’s bilingual education and special programs, Nancy Albarran was director of curriculum, instruction and English learner services for pre-kindergarten though the elementary grades.

The following are edited excerpts from an EdSource interview with Matthews and Albarran about challenges and encouraging signs in their district under the Common Core.

What do you see as the very specific difference that is coming with the new standards?

Matthews: It’s the way that it looks at boosting a conceptual understanding and critical thinking. This is what we heard from the community and from businesses four years ago when we created our strategic plan – that they’re looking for those with the critical thinking and the creative skills to not just see what’s right ahead, but also what’s around the corner. Previously the floor was the California State Standards, but now we believe the floor has been raised with Common Core. So it’s not all the way where we want to go, but we believe it’s absolutely in the right direction.

Give us a picture of what that looks like in the classroom, what a parent visiting a class would see differently.

Albarran: We see teachers not just asking students to define and recall and match information, but having students infer, predict, estimate. We see a lot more synthesis and investigations – students really having to look at and challenge complex texts. We see a lot more non-fiction. That’s a great shift, given that 80 percent of what students are going to look at and read is informational texts in college and post-secondary education.

Could the demand for higher standards backfire for English learners or poor kids who have always been behind, if you don’t put in a lot of extra effort? In New York when the first results came from the Common Core tests, the minority students and low-income students did worse than they had done before compared to white students.

Albarran: We have done a lot of work with the English Language Development standards and are making sure that our teachers understand the difference between teaching in English and teaching English as a language. We’re really committed to using that 20 percent supplemental funding (under the Local Control Funding Formula) to create additional opportunities for them to learn English at an accelerated pace.

Matthews: The other piece of that too is to be out front. Then, as you’re designing what you’re doing with Common Core, you’re always having that in mind. We’ve invested significant money in adaptive learning programs in response to our teachers indicating that they needed additional support with individualizing instruction, especially for English learners and students that have significant gaps. We’ve leveraged that resource to allow teachers to work with small groups while other students are having their needs met through our adaptive learning programs.

You did not use the interim assessments that Smarter Balance provided. How are your teachers getting a sense of what their students are comprehending?

Albarran: The interim assessments only recently became available, and our teachers have access to them. We started our implementation in 2011 and 2012. We’ve created more than 300 units in collaboration with WestEd (a San Francisco-based research organization) and created assessments that went with each of the units. Many of the assessments are performance-based (instead of multiple choice), and that really informed the instruction in the classroom.

How are you preparing them for an online test?

Matthews: We had already made significant investments in technology before Common Core. We continued through Common Core, but we’re not having to spend the lion’s share on technology, and so we’re able to spend much more on professional development for our instructional staff.

Do you have adequate curriculum materials aligned with the Common Core?

Matthews: The loudest complaint that we’re hearing, especially from our elementary instructors, is not having all the materials that they wish were in place. With limited resources, when we do make the purchase, we want to make sure it’s high quality, it’s very rigorous. Some publishers say that theirs are at a high level, but once we look at the material, we determine that it’s not going to give our students what they need.

Where specifically do you feel that – more in English than in math?

Albarran: Mostly at the elementary level in Language Arts. And also in our transitional bilingual. High-quality Spanish materials have always been a concern, but it’s a real concern now.

If you had significant money for Common Core that came your way this year, how would you use it, and what would your priorities be?

Albarran: Professional development. Especially at the elementary level, we have a lot of teachers that have told us, “I need more training for myself in the area of math.” So I would really create a lot of opportunity for teachers to build their own understanding in the content areas. And then a lot of time for collaboration. Many times people keep looking for the magic program that’s going to change outcome for students yet it’s really about how our teachers are refining their instruction. To do that they need time with their peers, time to really dig deep into the standards.

So at this point do you feel like the teachers in the district are pretty well prepared on a scale of 1 to 10 to take on this challenge?

Albarran: We are where we need to be in the initial stages of implementation, and we still have a lot of work ahead of us. But I’m confident that by 2019-20, when California expects everybody to be in full implementation, we will be there.