Tale of two cities – to close or not to close schools? 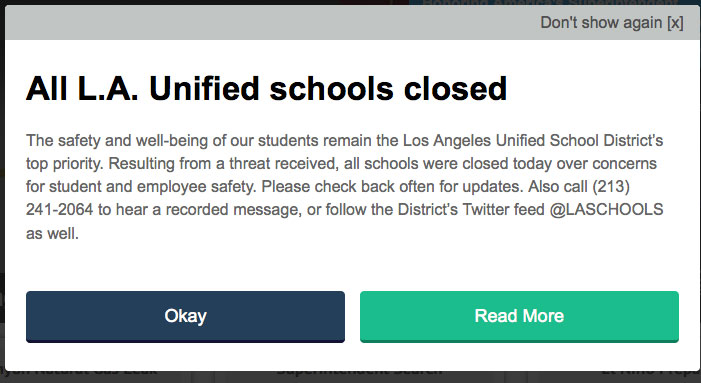 What would you do if you were a superintendent of a school district with hundreds of thousands of children – actually any number of children – and received a bomb threat that you weren’t 100 percent sure was a hoax?

And the threat came just 10 days after the worst terrorist attack on U.S. soil since 9/11?

In Los Angeles, Superintendent Ramon Cortines chose the “err on the side of caution” route, and shut down the nation’s second-largest school system for a day on Tuesday, despite the disrupted schedules of  over 600,000 students and their families.

“I am not taking the chance of bringing children any place, into any part of the building, until I know it is safe,” he declared.

Meanwhile, on the East Coast, where New York City school officials received a similar threat the same day, they chose to do nothing.

Mayor Bill DeBlasio said the letter his city received was “so generic, so outlandish” that it was clearly a hoax. “Kids should be in school today,” he said. “We will be vigilant. But we are absolutely convinced our schools are safe.”

In a swipe at L.A., New York City police chief William Bratton said the decision to close the L.A. schools was “a significant overreaction.” “We cannot allow ourselves to raise levels of fear,” he said.

Lest anyone think that this was an East Coast-West Coast thing – New York bluster vs. California compassion – Cortines is no stranger to New York: in fact he was once chancellor of the New York City schools. And Bratton was police chief in Los Angeles for nearly a decade.

Maybe Los Angeles officials were understandably more jittery than New York officials after the mass killings in San Bernardino  – which took place less than two weeks ago, just an hour’s drive away (without traffic) from the school district headquarters in downtown L.A.

That is what LAPD Chief Charlie Beck implied in justifying his city’s action. “Southern California has been through a lot in the past few weeks,” he said. “Should we put our children through the same thing?”

But if anyone should be jittery about threats of this kind it would be the mayor of New York City, a city that suffered the worst terrorist attack — actually, attack of any kind — in the nation’s history.

What would you have done?

I personally think Cortines made the right decision. With two children in public schools (but even if that wasn’t the case), I’d want those in charge to put safety of children first, regardless of the disruption it might cause.

And remember that Cortines hardly had any time to make the decision. He says he was first notified of the threat at 5:00 a.m.  All across Los Angeles parents and children were about to head out in buses, trains and cars to get their kids to school, along with their teachers and other staff. Given Los Angeles traffic, many were probably already on their way.  Many were on their way or already there when the district began notifying parents around 7 a.m.

But I also recognize these are judgment calls. What the East Coast-West Coast back-and-forth underscores is that there are probably no right or wrong answers when it comes to dealing with threats of this kind.

What is clear is that the San Bernardino massacre this month has raised the level of caution that public officials must exercise to a new level. The killings there came without warning. The couple who carried out the attacks there weren’t on the radar of the nation’s national security apparatus.  So far, at least, it seems they didn’t raise suspicions of their closest family members and co-workers.

So it is understandable that Cortines, Beck and others in Los Angeles would feel they needed to make their own decisions — and to do so quickly — rather than rely on national security officials or the FBI to do an analysis before deciding what to do.

The incident also illustrates just how vulnerable institutions, including massive one’s like LAUSD, are to empty threats. Presumably the district — and others around California and the nation  — will learn from this experience, and be better prepared to handle similar situations in the future. Closing an entire district should obviously be a last resort.

But it doesn’t help to have New Yorkers trying to sound more intelligent than California school officials for making a decision they felt was in the best interest of the children they serve.

Fortunately, the threatened attack appears to have been a hoax. But if it hadn’t been, DeBlasio et al would not be looking so smart today.