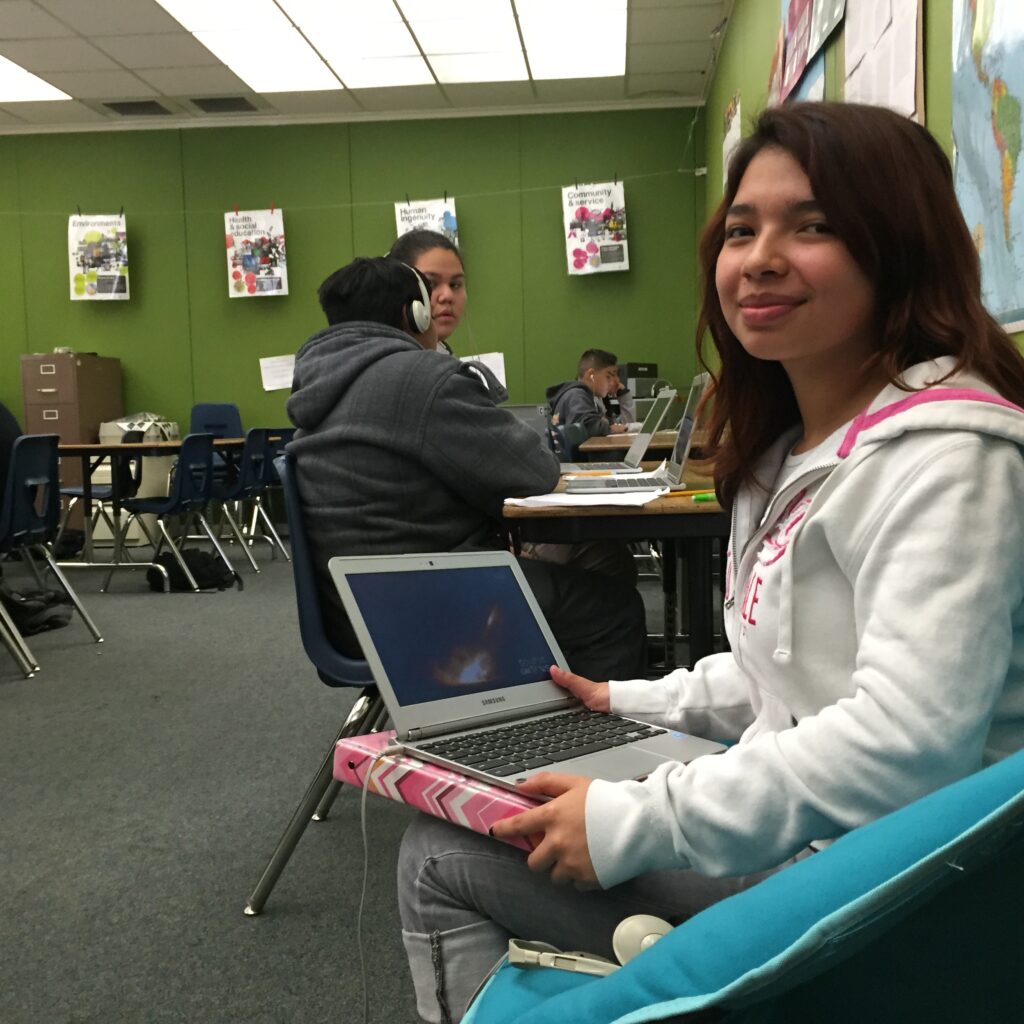 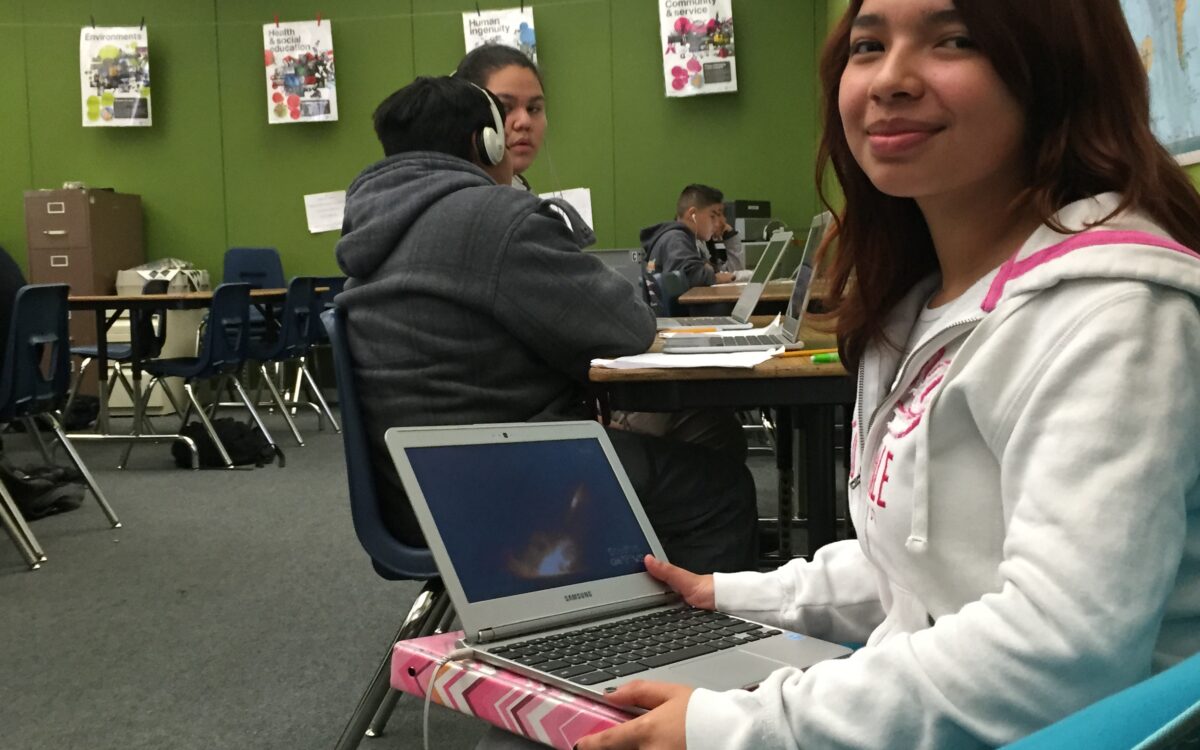 For the Common Core State Standards to fulfill their promise to prepare all students for college and careers, many California youth will need extra help to improve their language skills, say educators and advocates in diverse regions of the state.

Specifically, they worry that the instruction aligned with the new, more rigorous standards will create disproportionate hurdles for students, especially English learners, who may lack the language skills to meet new expectations. These include that they be able to explain their reasoning in math classes and participate in more challenging classroom discussions in English language arts.

“We’re concerned that we’ll see a widening of the achievement gap if we’re not very proactive,” said Nicole Knight, executive director of the Oakland Unified School District’s English Language Learner and Multilingual Achievement program, which Knight said was created a year ago to meet such concerns.

The term “achievement gap” commonly refers to the persistent lower test scores and higher dropout rates for African-American, Latino and low-income students, and students who are still learning English.

Twenty-three percent of California’s more than 6 million students are English learners, and nearly 60 percent of the state’s students qualify for free or reduced-price meals.

“There’s a new emphasis on language, a direction away from memorizing facts and rote learning, and a call for students to do more critical thinking, which the old standards didn’t have,” said Shelly Spiegel-Coleman, executive director of Californians Together, a statewide coalition dedicated to improving  academic outcomes for English learners.

Spiegel-Coleman said such expectations may ultimately help all students get more out of school, yet argued that they won’t reap these benefits unless teachers are specially trained to give students still struggling with English the extra help they need.

Concerns about students’ readiness to adapt to the new standards include not only English learners but other  students who enter school with relatively limited vocabularies in standard English. In one oft-cited study in 1995, two University of Kansas researchers revealed what has come to be known as the “word gap” between children from higher- and lower-income families. They found that in the first four years of life, a child living in poverty will have heard as many as 30 million fewer words than a preschooler from a more affluent family.

Another cause for worry emerged last year, when the first results from standardized tests administered in New York, Kentucky and Illinois showed that on average fewer black and Latino students scored at a proficient level than they did on previous standardized tests. Additionally, the gap in scores on the new tests of these groups compared with white and Asian students was wider than in earlier tests that were not aligned with the Common Core.

Jason Zimba, a leading author of the Common Core math standards, contended that the gap hadn’t widened, but rather that the new tests, by measuring it differently, had shown it to be wider than many educators had previously perceived.

“Until now, we haven’t had standards that accurately reflect the demands of college- and career-readiness,” Zimba said in an interview with EdSource. “So I think we are going to see a bracing set of facts that were always there but were never shown to us before.”

Many California educators are  anticipating that fewer students will be ranked as proficient on the new Smarter Balanced tests that 3rd through 8th graders and 11th graders are taking this spring. Knight said that Oakland district officials expect that, just as in other states, Oakland’s students will have lower scores compared with tests under previous standards, and that the gap between the scores of wealthy and low-income students will be wider. That anticipation has created a “moral imperative,” Knight said, for teachers throughout the district to work harder to start narrowing the gap, however it is measured.

To shore up students’ skills, she said, her one-year-old office has been training teachers and principals alike to cultivate “academic discussion” in their classrooms. In a blog for the Teaching Channel, Knight defined that term as “purposeful and sustained conversations” among students that include what she called “talk moves”: classroom discussion strategies such as asking a teacher or fellow student for clarification, paraphrasing what other students or the teacher has said, as a way to help understand, and building on what other participants in the discussion have expressed. Knight said she is encouraging her district’s teachers to provide students with limited English skills both more opportunities to use their English in class and more guidance on how to use it.

In the Santa Ana Unified School District, where nearly nine out of 10 students are current or former English learners and a similar share come from low-income families, district officials got to work more than three years ago to make the most of their time as they prepared for this spring’s first Common Core-aligned assessments, according to the district’s assistant superintendent, Michelle Rodriguez.

“We know our students need additional support to meet the higher expectations, and we don’t want to change those expectations,” Rodriguez said.

The district officials began by contacting states that were early adopters of the Common Core to learn from their successes and failures. They then ramped up teacher training, providing six days of professional development for each of the first two years of implementation. They also deployed 44 instructional coaches to work alongside teachers for several months. The goal, Rodriguez said, was to help teachers adapt to the new standards so that implementing them became like “riding a bike, with someone right there, holding onto the seat until you’re comfortable with it.”

Another particularly determined effort to help students who are at risk of getting a low score on the Smarter Balanced assessments is taking place in a formerly low-achieving middle school in San Jose.

Officials in the San Jose Unified School District recently dedicated $1.2 million in grants to transform the Peter Burnett Middle School into a showcase of educational reform geared for students who need extra help to meet the new education standards. The investments combined $1 million in district funds with $200,000 in private donations from Next Generation Learning Challenges, a national coalition of philanthropic foundations and state school officials that invests in applied technology to improve K-12 education, and the Silicon Schools Fund, a California-based initiative with similar goals.

On a recent morning, Lisa Aguerria, the school’s principal, led a visitor through classroom after classroom to show off the changes. Burnett has switched all of its classrooms to a strategy known as “blended learning,” combining traditional, teacher-led instruction with independent study on brand-new laptops with Common Core-customized software.

Students are divided into small groups that rotate between these activities to allow more one-on-one time with teachers. While one or two groups are working independently, the teacher can take time to talk with each member of a small, separate group.

Burnett won its grants in a district-wide competition for the best plan for change. The victory was fortuitous, given persistent disparities in test scores between its mostly Latino, low-income students compared with an average for white students in the rest of the district.

“Students at our school have historically been on the wrong side of the achievement gap,” said Aguerria. “We have to do things differently if we want to change that.”

Sandra Juarez, 14, who came to San Jose from El Salvador two years ago, said she appreciated the changes. “Last year was good, but I’m learning more this year,” she said, as she sat in a small group of students working on laptops to research and answer the question of “What is the coolest job?” At a nearby table, her English teacher was leading a discussion with half a dozen other students on the ethics of scientists experimenting on human subjects.

“When she teaches a lot of people, we don’t understand,” said Juarez. “With fewer people, we understand better.”

San Jose Unified School District administrator Rupa Gupta said the school has already gathered evidence that the changes are indeed accelerating many students’ learning. She said interim Measures of Academic Progress tests have shown that more than half of the Burnett students have achieved twice what would be typical growth rates in either math or reading.

The public funds for the transformation of Burnett came from the San Jose district’s general fund. But San Jose and other districts have also been able to draw on unprecedented new state money coming under the Local Control Funding Formula, which will provide several billion dollars over the next few years specifically to help student groups that have historically lagged behind their peers.

In San Jose, for instance, district officials are using some of that money to hire “intervention specialists” who work in classrooms of schools with higher proportions of English learners and low-income students to help them cope with the new standards, according to assistant superintendent Jason Willis.

Spiegel-Coleman of Californians Together said she hoped such efforts will increase in coming months so that the Common Core standards truly help all students.

“Our fear is that these new standards could become one more reform effort that has potential but doesn’t respond to the needs of students who are speaking a language other than English, and can further disadvantage them,” she said.

Californians Together has created a toolkit for parents of English learners that explains the Common Core’s special challenges and provides talking points for parents to seek extra help for their children from teachers and other school staff.

Education advocates also point out that the persistent achievement gap has more complex and stubborn roots than can be addressed solely by school-based initiatives such as the Common Core, and that further investments will be needed to close it.

Kim Patillo-Brownson, director of educational equity for the Los Angeles-based Advancement Project, said the more rigorous new standards make it all the more urgent that California invest more in early childhood education to reduce the number of low-income and minority students who are already lagging behind their peers by the time they start kindergarten.

Still, Patillo-Brownson said she was hopeful about what might be achieved as a result of the rare confluence of new and higher standards in the schools and the extra funds that districts are receiving to help struggling students under the state’s new financing reforms.

“It won’t last forever,” she said.  “But for now it’s giving us an unrivaled opportunity to make progress.”