Students can satisfy college math requirement while in high school 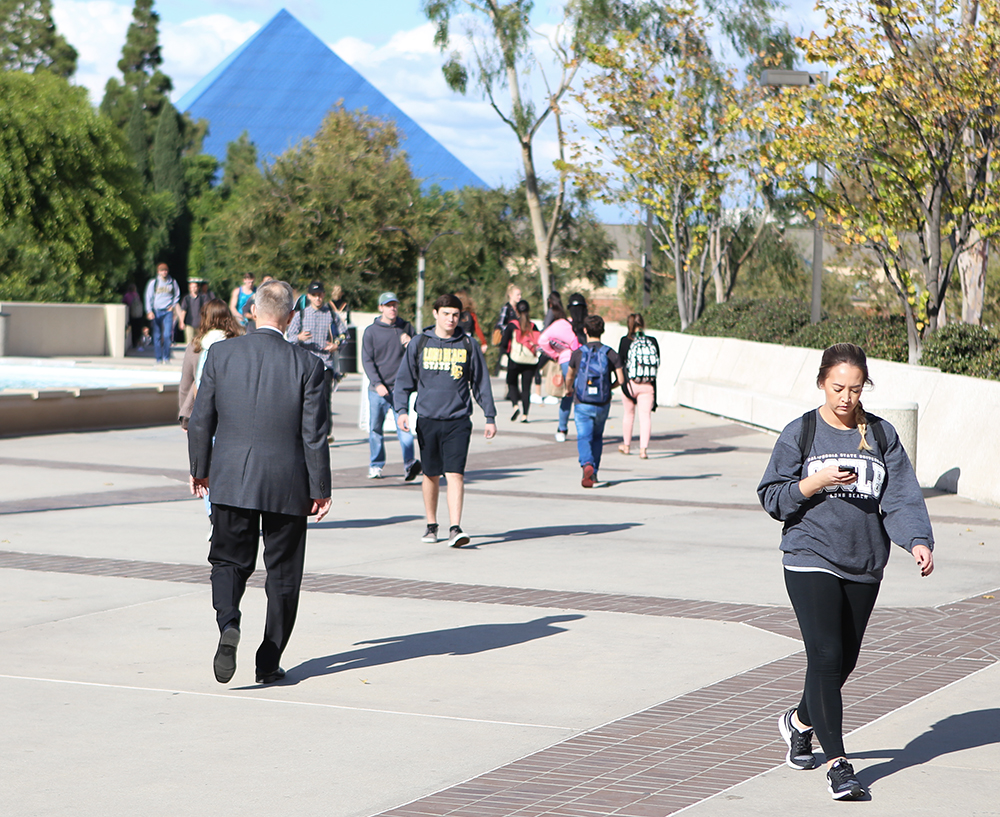 Alyssa Wallace, a senior at Long Beach Polytechnic High School, was among the 29 high school students who took an unusual math class last summer; the course, taught at Cal State Long Beach, will allow her to get her college degree without taking another math class once she enrolls at the campus.

Math 103 is the only class offered at a CSU campus designed for high school students to earn college credit, say its organizers and CSU officials. It also aims to attract would-be teachers.

The course is part of an effort to address a major obstacle that has sabotaged the academic plans of numerous California students – satisfying college math requirements.

Unlike Advanced Placement classes, Math 103 isn’t targeted at exceptional math students. Instead, the class is open to any student in 11th or 12th grade who’s passed Algebra II.

“Those students who aren’t super strong in math may not have to take a college math course ever again,” said Carol Ortega, Long Beach Unified program administrator for K-12 counseling. Ortega coordinated student enrollment for Math 103.

The course teaches mathematical modeling, or the application of mathematics to real-world problems. Students may use technological tools, such as computer programs, to identify a set of rules to solve a problem or examine data related to the issue to find a solution. Passing the course with a C or better allows students to bypass the math placement test at Cal State Long Beach and all additional math classes for majors with minimal math requirements.

Wallace enrolled in the course because she’d rather study fine art or business marketing than math when she enters college.

“I was interested in getting ahead in college with the three credits I would be awarded with by taking this class,” Wallace said. “I have no interest in math for college.”

Whether students attend Cal State Long Beach directly after high school or transfer to the university from Long Beach City College, the math waiver applies. Math 103 will also satisfy general education requirements at other CSU campuses, said Babette Benken, the Cal State Long Beach math professor who launched the course. Universities outside the CSU system will regard the class as regular university coursework.

“We’ve been developing new pathways and outreach that will help recruit students into teaching,” Benken said. Math 103 is one of them, as it helps aspiring teachers complete the coursework they need early on, she said. Benken’s colleague, Jen-Mei Chang, an associate professor of mathematics, taught the class.

Benken created the course after speaking with Long Beach Unified Superintendent Chris Steinhauser about how many students fail to earn college degrees because they struggle to meet university math requirements. Next year the course will likely include more students, and a similar course that will give high school students the chance to earn university science credit may be offered as well.

The new course comes as education advocates have criticized the current math placement tests at California’s community colleges and state universities, saying they create barriers for students rather than accurately assessing their math skills.

Next year the California Community Colleges System will pilot a common assessment system that tests all students for the same skills. Currently, community colleges use different tests to place students in classes, but Assembly Bill 743 required the community college system to develop one assessment. The new assessment will prevent students from being re-tested if they transfer to another community college and will streamline class placement. Students increasingly attend multiple colleges to complete degree work, and the lack of a uniform assessment resulted in more testing for students.

Those who score low on placement tests must take remedial courses in college. Benken fears that students placed in those classes will be less likely to graduate. She said that remedial courses are a particular obstacle for community college students. Approximately 75 percent of incoming students at community colleges take remedial math or English, according to the California Community Colleges Chancellor’s Office.

“We’ve found students struggle to leave community college because of math or science requirements,” Benken said. “That usually becomes a stumbling block to them in terms of transferring.” She said Math 103, which for the time being will meet exclusively in the summer to better accommodate high school students, will benefit those students who might not do well on the math placement test.

Those students include some potential CSU students. Even though students must meet the requirements for university admission, known as A-G requirements, which include math, some students score low on the math placement test.

Sixteen percent of the freshmen who entered Cal State Long Beach in 2014 needed to take at least one remedial math course. Twenty-seven percent of all CSU students entering in the fall of that year needed remedial math.

While students don’t need top-level math grades to qualify for Math 103, they do need to complete Algebra II because the class requires them to use algebraic models for a number of tasks, including calculating trends, making predictions or designing contests. Students apply equations to different scenarios, such as whether it would be better to buy or lease a car, Benken said.

Wallace found the class both useful and relevant.

“I think applying the basic math most students know by freshman year to real-world situations is more helpful and important than that trigonometric function you won’t be using for the rest of your life unless you become a scientist or inventor that needs to know about frequencies and waves,” she said.

All students passed the class, with their skill levels ranging from average to excellent. Most fell in the middle, with just a few exhibiting strong math skills, Chang said.

“They were where you’d expect them to be after one year of Algebra II,” she said. “With that in mind, when I designed the lessons I tried not to do anything too rigorous.”

Instead, she introduced the students to software to help them understand mathematical modeling concepts. They also installed computer programs with formulas and collaborated on problems of interest to today’s tech-savvy kids, such as determining the best coordinates to place a cell phone tower.

While Wallace was one of Chang’s more artistically inclined students, Autumn Clay signed up for the course precisely because numbers excite her. But Clay, also a senior at Poly High, said Math 103 was not easy.

“Applying math to real life is much more difficult than I thought because true life doesn’t always give you every piece of information needed; sometimes you need to infer or figure it out,” she said.

Clay wants to be a pharmacist and said the class will shave off a sliver of the six years she’ll spend in school to earn a degree in the field.

Chang acknowledges that most students enrolled in the course for the chance to earn college credit. By the time they finished the course, however, they developed a new perspective on math. They previously thought of the subject as simply the memorization of formulas.

But in Math 103, Chang said, “Every day they had to share ideas and communicate about open-ended problems. They’re not asked to do those things on a regular basis. They got to see a different way of solving real-world problems.”

Clay agreed. Although she believes she’s always had a knack for math, the 12th-grader said Math 103 required her to put a variety of skills to use.