'Stress in kids these days is different,' says California teacher of year 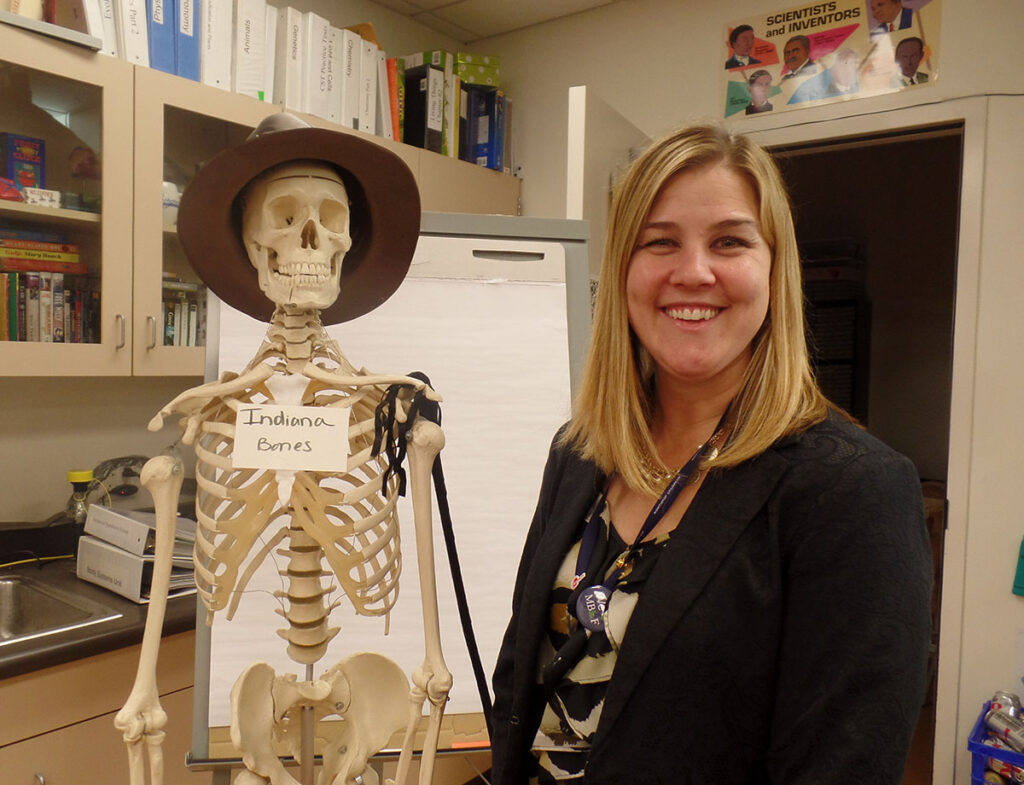 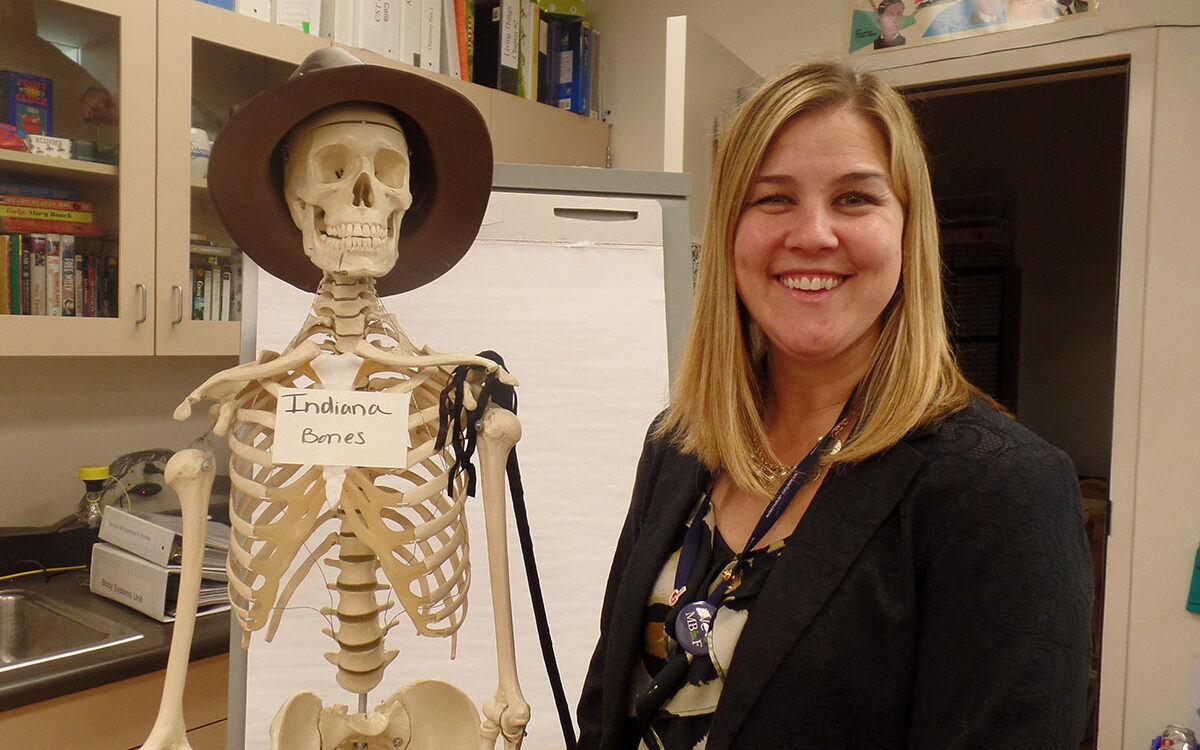 Maggie Mabery, the California Teacher of the Year for 2015, stands with Indiana Bones in her science class at Manhattan Beach Middle School in May 2015. By Sarah Tully, EdSource

Maggie Mabery, the California Teacher of the Year for 2015, stands with Indiana Bones in her science class at Manhattan Beach Middle School in May 2015. By Sarah Tully, EdSource

When the nation’s top teachers were asked about the biggest barriers to students’ success, most didn’t point to reasons inside the classroom. Instead, they ranked family stress and poverty as the main issues facing students.

The Council of Chief State School Officers and Scholastic Inc. sent surveys to the 56 winners of Teacher of the Year awards from all states and jurisdictions, including Washington, D.C., and Guam. Of those, 46 winners from 2014-15 responded.

The top answer was “family stress” by 76 percent of respondents, followed by 63 percent stating poverty and 52 percent citing “learning and psychological problems.”

California’s Teacher of the Year, Maggie Mabery, works as a science teacher at Manhattan Beach Middle School in an affluent, beachside community in Los Angeles County, so poverty isn’t a core issue there. The median income is $139,259, with just 3 percent of residents below the poverty level, according to U.S. Census data.

But Mabery, a teacher for 15 years, listed family stress as the top concern in her area. In a Washington Post article, Mabery said: “In a rich-kid neighborhood, there’s a completely different set of stresses. The role of the teacher has become so much more than student learning. I teach about 50 percent of the time. The rest is coaching kids how to be responsible, how to be a great adolescent.”

EdSource sat down in late May with Mabery to talk about how she spends her days, the stress she sees in her students, as well as other education topics. Here are her edited words.

Tell me about how you spend your school days.

We work in trimesters here and I think of my life being in a trimester. So right now I’m in the midst of trying a bunch of new project-based learning.

It’s interesting because, when I first became a teacher, I was like, ‘We’re going to take a test. And we’re going to have this formal assessment.’ I’ve just let that go in the last couple of years. I think science is about building and creating and collaborating. … I think those are the skills that our kids need in the worldly society that we’re pushing them toward.

When I was in school, science was like, ‘This is the answer to A. The answer is carbon.’ Yeah, that’s great. But science in the real world is so much more than that. … Coming up with the problems and solving them and building. It’s so much more important than, Do you know every element on the periodic table? I’m like, who cares? Google it.

I say it all the time. ‘I don’t know. Google it.’ They (students) want me to be this expert of science, which is great and I have a very good basis for it. But why waste our brain space on just a fact that you need to know for one second? I’d rather you learn a process of how to build something, how to fail at it. People hate the word failure. But science is all about failure. … I think that’s a life skill that we don’t talk about that’s so important in education right now.

In the Washington Post article, you talked about how half of your time is spent teaching. How do you divide your time?

Half of my time is teaching my curriculum.

I think that’s a push of the Common Core and definitely the Next Generation Science Standards. I don’t want to say, I don’t teach 50 percent of the time because I’m teaching how to work in groups, which is a great life skill. I’m teaching them how to create things, giving them options.

There’s not a standard to measure it. Lets play a little bit and figure it (out). I think those are important things, especially in middle school. Experiment to see what you are good at. When you get to high school – where I say it really counts – you’ve got skills to help you manage your life.

Do you spend time with kids outside of class?

I’m one of these early birds, so I’m here early. Kids come in here to hang out. They’re in during their break times. It seems to be a room that kids hang out in.

Tell me about stress being an issue for students.

I just think stress in kids these days is different. From a parent perspective, I see what my kids do, compared to what I did. In first grade, I walked home from school. I went home. I didn’t have homework. I played. My (elementary age) daughter, on Tuesdays, she has swim lessons. On Wednesdays, she has piano. I think there’s so much information out there now that people get scared.

I think there are so many more worries … because you can go find an answer on Google for whatever you want. … It’s scary to be a parent because you know all this stuff that goes to your child.

Kids pick up on that at 13 and 14. We hear it from our site administrators. Kids are so stressed because we give too much homework. In my head, I’m going, I give less homework than what I had in middle school. So, what’s the give and take here? We want the students to have all these things, but we don’t want them to do homework outside of school? So how is this going to happen?

The students I have here, some will be on traveling teams and they’ll have to miss certain days of school. And so you are missing great curriculum days because you are traveling with a team. And that’s obviously going to affect your academics.

Not that that’s a bad thing, but there’s going to be an effect.

Do your students talk about having too much homework?

We hear it from our administrators. It’s typical. A parent is not going to come to me and say, ‘You give too much homework.’ They are going to call my principal. And every couple of months, he’s like, ‘I’m getting all the phone calls about too much homework again. It’s causing too much stress. They have no family time at home.’

So, it’s like a double-edged sword. We want to raise these great kids who are college and career ready. Obviously, as educators, we think it’s an OK call to give these assignments outside of school. So, it’s just how do we get there without that?

How much homework do they have here?

They are supposed to have around 20 to 30 minutes per class. I give way less than that. The only homework I give is reading. So they are supposed to read a section of the book. They are given that on Monday and I give them a formal assessment at the end of the week.

Do you think the principal gets calls about homework because students have so many other things going on outside of school?

Kids have a lot of things that are going on outside of school. I think parents do. Most parents work. They do know when things are tense at the household.

Do you think the kids at this age are already stressed about college?

I think so. I do. I wouldn’t say every one of them, but I do think there are populations of them. I do have a student this year. I feel awful when I have to take off a point because she gets so worked up if the answer is correct. I’ve had so many conversations with her. Yes, you do really well on standardized tests. But, as far as applying what you know in science, which is how we’re moving with the Next Gen Science Standards, I’m not seeing you being able to apply. I don’t want to ruin her day because she got minus 1 on a lab. Who cares? It’s nothing. That’s nothing in life.

Where do you think that comes from? Is it them or their homes?

It’s got to be a little bit of both. Life is competitive now. You hear about it all the time. You hear about college acceptance. It is crazy. I can’t imagine that pressure being on me. There’s no way I would have gotten into the college I got into now. The expectations are just so high.

When you answered that survey, what did you say?

I said family stress. Poverty for me was not an option where I work. It was interesting because many others felt the same way, across the board.

How do you think stress affects school performance?

Some stresses make kids move up to the plate and hit a home run. And some kids, I think, it shuts them down. It just depends on that personality.

I do think it’s hard to do when you have so many bodies in a classroom. I have some classes with 36 kids. If student A is responding by shutting down and student B is excelling, I’ve got to get to both of those personalities. That’s what’s hard to do. I have 200 bodies a day I’m responsible for and teaching them science. It’s a lot.

Are there things that need to be done in school to deal with outside stress factors?

I’ve always been a big believer in class-size reduction. I’ve seen it in my own class. This year alone, I have one class that’s 24 kids and the rest are pretty much at 36. That 24 (student class), I know every single one of those kids. That’s 12 more kids in a class. I think it makes an impact.

I know research sways to both ways. But, especially in this class, when you are building stuff and the materials that you have, you can individualize the projects that they need. It’s funny. When we do tasks that other students do in the 4th period class that’s a little bit larger, we spin through them. We’re done in like half the amount of time. So I can get to know them better.

That’s a funding issue. Hopefully with Gov. (Jerry) Brown … that was a big push of his, class size reduction. Hopefully, he goes down that path.