Teachers from Mexico and California collaborate to teach algebra 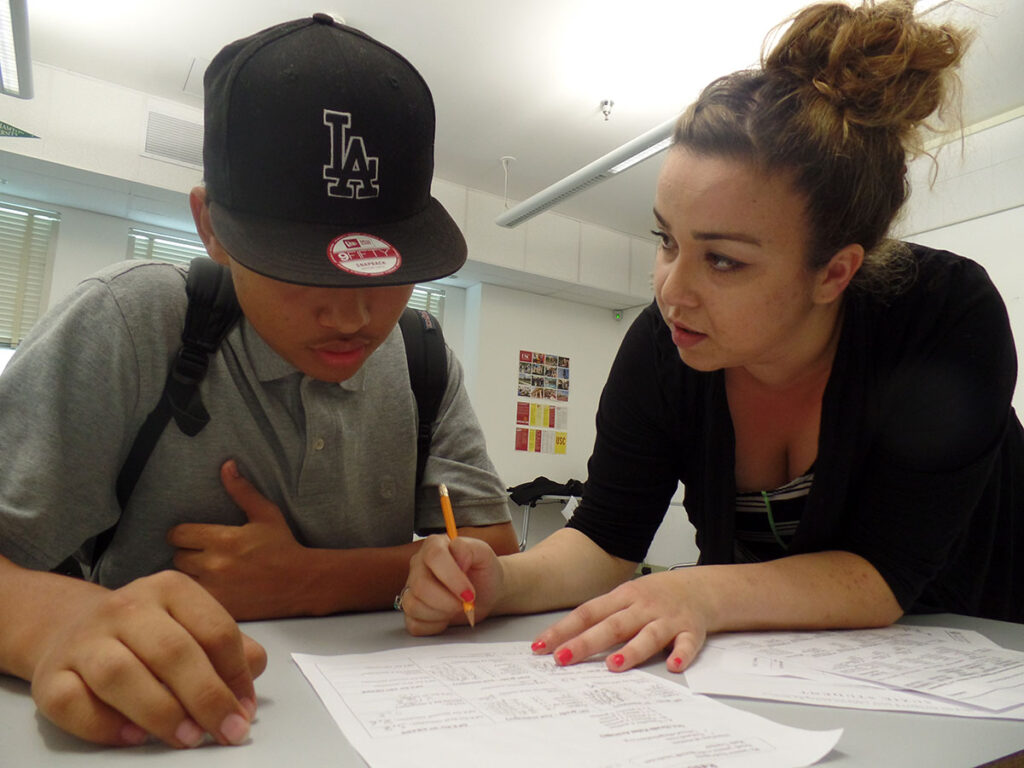 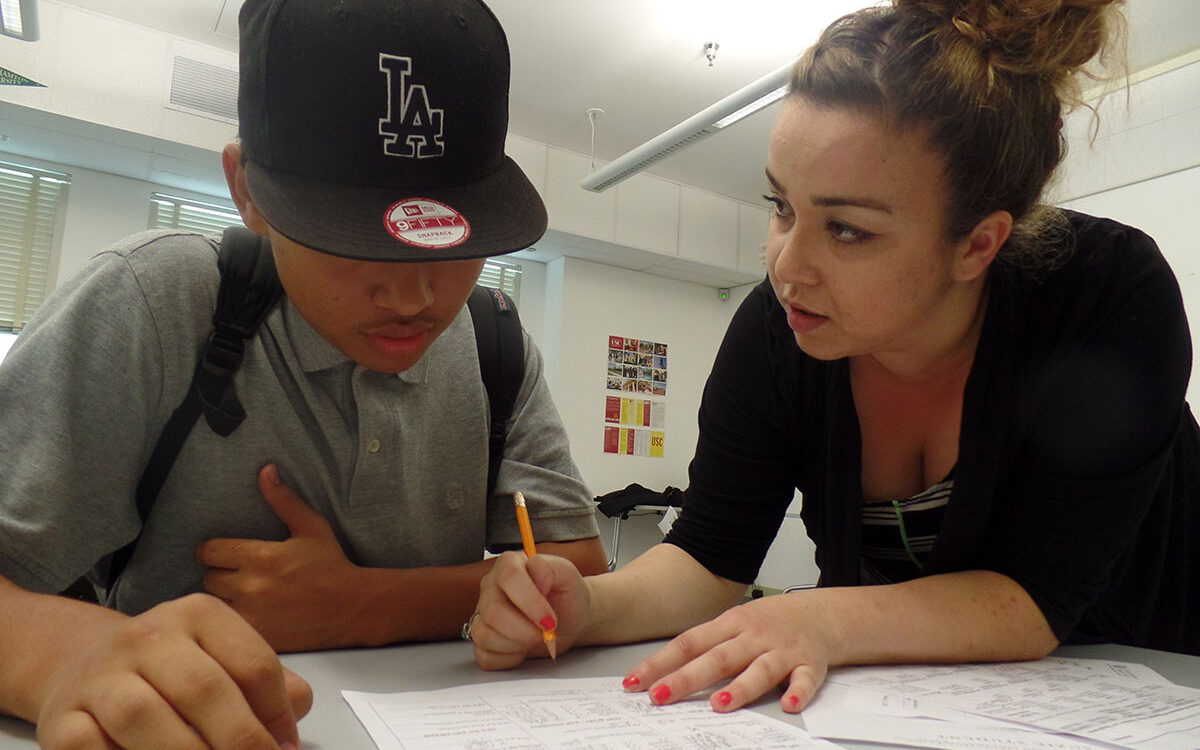 A group of Los Angeles students who are new to the United States spent part of their summer break learning algebra in a pilot program with materials that are lacking in most places nationwide – Common Core-aligned lessons in Spanish.

For five weeks, high school students completed an algebra class given in both English and Spanish by teachers from the Los Angeles Unified School District and the University of Guadalajara in Mexico. All of the Los Angeles Unified students in the class have lived in the United States for less than a year, speak Spanish as their native language and have minimal English skills. In the end, 36 students completed the class in July.

The class used a new online curriculum that toggles between English and Spanish, developed by University of California and Guadalajara university educators in the hope that eventually some schools in both countries may use the materials.

“I don’t think there’s much question that there’s a real need out there for this support,” said Patrick Callahan, statewide co-director of the California Mathematics Project, who helped develop the curriculum. “I think the challenge is that it’s not just an issue of translating into Spanish, but a combination of understanding the more rigorous expectations of the Common Core and how that plays out for English language learners.”

This fall, Los Angeles Unified officials will decide how the materials could be used in classrooms, said Gerardo Loera, the district’s chief academic officer. The goal is that the curriculum will be a key part of some algebra classes and may eventually be extended to all newcomers in the district.

“We see it as a promising project for us,” Loera said.

Instructional Materials for English Language Learners in Urban Public Schools by the Council of the Great City Schools, 2012-13

While UCLA has directed a project to help Spanish-speaking high school students since 2008, this new class for the first time is aligned with Common Core standards, said Patricia Gandara, co-director of the UCLA Civil Rights Project, who leads Project SOL, or Secondary Online Learning. Project SOL has worked with educators in Mexico since the beginning, but it is one of the few programs of its kind to incorporate schooling from both sides of the border.

Proposition 227, the 1998 state law that banned bilingual education, generally forbids Spanish-language instruction and materials in most cases, unless there is a waiver. But the restrictions only apply for those students under age 10, Gandara said.

Project officials chose to focus first on algebra because it is considered a gateway for higher-level classes and college preparation, Gandara said. In addition, the need for language help is greater in math, since English learners tend to get more help in other subjects. Next year, Gandara hopes to add geometry and algebra II.

Gabriela Uro, director of English language learner policy and research for the Council of the Great City Schools, said schools nationwide are struggling to find native-language materials to assist students. She said programs like Los Angeles Unified’s – which use online curriculum and teachers from the U.S. and Mexico – are rare. She knows of just one other in Yakima, Wash., in which U.S. students use online curriculum from Mexico.

“It was a challenge even before Common Core. Now with Common Core, the publishers are focused on revising (books) in English,” Uro said. “Producing them in Spanish doesn’t come up as a big priority.”

It’s especially an issue in Los Angeles Unified, which has the largest population of English learners in the country – about 164,349 in 2014-15, according to state data.

Loera said it’s difficult for teachers to determine if students don’t know a subject – like how to solve algebra equations – or whether they don’t understand the vocabulary. Native language materials help explain the subject matter while students are still learning the English words.

The summer class was held at the district’s West Adams Preparatory High School, just west of downtown Los Angeles, that has seen an influx of new immigrants in recent years, said Assistant Principal Jose Gonzalez. Many of them are from Central America, including some considered “unaccompanied minors” who had spent time in immigration detention centers before entering Los Angeles schools.

Overall, about 27 percent of the school’s students are English learners, according to state data. The district doesn’t track numbers of students who are new to the country, Loera said.

Everyone in the summer school class had failed algebra during the school year. The summer class was aimed at students with beginning-level English skills – the first time a makeup class was offered for that group.

Although the students were all enrolled in algebra during the school year, their math abilities varied. Some had been attending school in Mexico or Central America before moving to the United States, while others hadn’t been in classes recently.

Some students needed help with the basics, such as fractions and multiplication, said Edith Issakhanian, one of two Los Angeles Unified teachers in the pilot. Others seemed to understand algebra, although they struggled with the vocabulary.

As part of the summer school class, students answered math word problems on iPads, going back and forth between English and Spanish, so they could master the vocabulary and explain the concepts.

“I think that those kids were a little skeptical at the beginning,” Gonzalez said. “They were not sure what was happening or what to expect. As the program continued, they realized they were being taught in the primary language. It made it a lot easier.”

All English learners who enter the school system must take a test to assess their English ability. Students are given an initial assessment if they come from another country, state or district.

Here is some data about students who took the initial English test, called the California English Language Development Test, in 2013-14, the most recent numbers available:

Omar Contreras, 18, who is going into 10th grade, started at West Adams in February. He had left school at age 14 to work in the fields, growing corn and beans, in El Salvador. Students like Contreras, who missed some years of school, can stay in traditional high schools past their 18th birthday if they are making academic progress, Gonzalez said.

In class during the school year, Contreras said a Spanish-speaking aide sometimes explained material. But the summer school class helped more because of the Spanish translations on the iPad, Spanish-speaking teachers from Mexico and group work with students of similar backgrounds. He got a B.

“They explain it better,” Contreras said in Spanish about the summer school class.

Alfonso Benitez, 17, an incoming 10th-grader, was born in Los Angeles, but he moved to Guadalajara, Mexico, at age 2. After returning to Los Angeles, he enrolled in school in January and initially struggled with algebra because he had never taken the subject before.

“I understood the (summer) class very well because it was bilingual,” Benitez said in Spanish.

Previously, Project SOL offered college-prep math and science classes to about 500 Spanish-speaking immigrant students in four Southern California high schools from 2008 to 2012. While the program increased access to those classes, less than half got a C or better in those classes, according to the project.

In 2013, the project launched its “2.0” version to build on that program, making it aligned both to the Common Core in the United States and school standards in Mexico. Eventually, the goal is for students to get course credit in both countries, especially for those who go back and forth, Gandara said.

Compared to the previous California standards, Common Core-aligned math is considered more difficult for English learners. Before, students were assigned more numeric computations, like 2 + 2, which are the same in both languages. But students now need to explain or write out how they came up with answers.

Issakhanian, the summer school teacher, said she used some of the early Spanish materials from Project SOL during the school year to help students in her classes who didn’t understand English. Because she didn’t have technology, she printed out papers, which her students appreciated. Other than that, Issakhanian had to rely on other Spanish-speaking students to translate the material that they might not understand themselves.

“I really am excited about this program and I hope a lot of schools take it on,” Issakhanian said. “For me as a teacher, it makes me happy to have the materials to make it an even better experience for my students.”