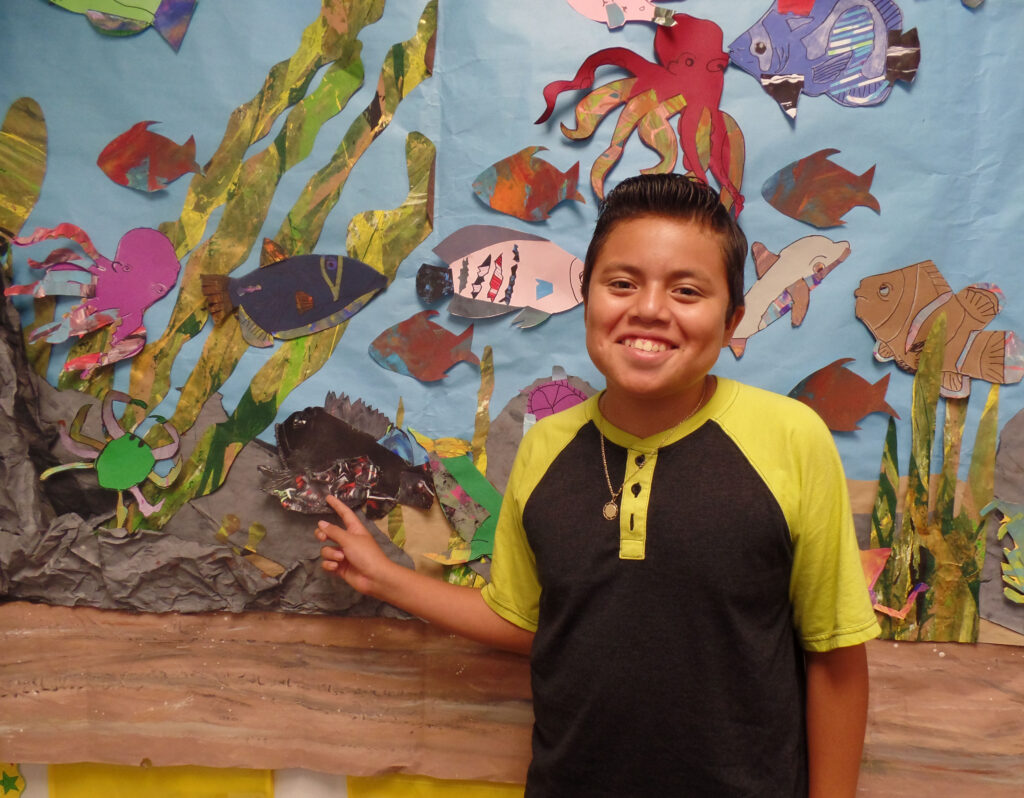 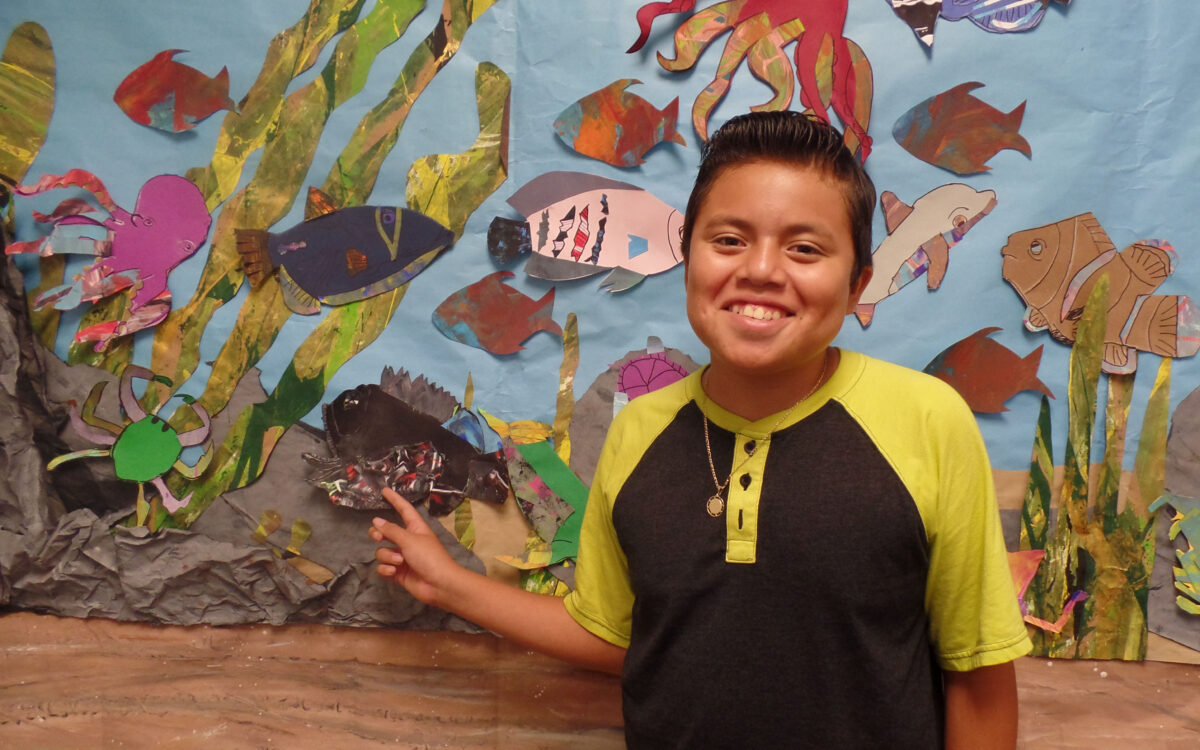 Sarah Tully, EdSource
Incoming sixth grader Oscar Cortez, 11, shows the stonefish he made on a school board during a science camp in Placentia-Yorba Linda Unified School District on July 21, 2015.

Sarah Tully, EdSource
Incoming sixth grader Oscar Cortez, 11, shows the stonefish he made on a school board during a science camp in Placentia-Yorba Linda Unified School District on July 21, 2015.

As elementary students swayed like seaweed and waddled like penguins in a dance lesson during an ocean-themed camp, they were soaking in something they probably didn’t realize – lots of English language.

That was the real goal of the two-week summer camp – a first offered by the Placentia-Yorba Linda Unified School District along with a university and a performance center in Southern California. Students who are English learners learned new, advanced English words and phrases and had opportunities to use them during the science and arts camp.

The free Fun in the Sun and Under the Sea English Learner Enrichment Summer Camp was directed at 150 students in 3rd through 5th grades who know almost enough English to test out of being English learners. The idea was to catch students before they become “long-term English learners” – those who have been in U.S. schools for more than six years and have yet to be “reclassified” as proficient in English.

“When you talk to them, it feels like, ‘Oh, this kid doesn’t need help in English,’” said Laurel Estrada, program specialist for federally funded Title 1 programs for low-income students. “But they have trouble making the jump from conversational English to academic English.”

The issue of “long-term English learners” has gotten attention statewide, especially over the past five years after a Californians Together report revealed that large numbers of students were remaining English learners well into middle and high school.

“Everybody treats me good here. It was nothing like I thought. It’s like the best school ever,” said Oscar Cortez, 11.

In reviewing 40 districts, about 59 percent of 6th- through 12th–grade English learners had been in the system more than six years, according to the 2010 report. Yet, those older students got little help with their language needs, increasing their risk of being put in remedial classes or dropping out, the report states.

“It made the kids visible,” said Shelly Spiegel-Coleman, executive director of Californians Together. “Once we put out the report and the numbers… districts just really dug into their data and started looking at what they needed to do.”

Since then, the state has started tracking the number of students who have remained English learners for six or more years. As of 2013-14, the most recent numbers available, about 72 percent of English learners in grades 6 through 12 – or 339,129 students – had been in school for more than six years.

Because some research shows that it often takes five to seven years to master a new language, schools statewide are taking steps to make sure their students become proficient in English within that timeframe.

The Los Angeles Unified School District, the state’s largest district, has a goal of reclassifying students within five years. And in its Local Control and Accountability Plan it also has a goal of decreasing the number of long-term English learners. Like the Placentia school, Monterey County schools had a six-week summer program for elementary school children to help prevent them from becoming long-term English learners, according to the Monterey Herald.

In Placentia-Yorba Linda Unified, officials are aiming for students to be “reclassified” before they get to middle school, where it gets tougher for them academically, Estrada said. Some students have to keep taking English language development classes once they enter middle school, leaving no room in their schedules to take electives.

To be invited to the Fun in the Sun and Under the Sea camp, low-income students had to score “intermediate” on state tests for English learners, called the California English Language Development Test. Intermediate is right below the score needed to be reclassified – early advanced or advanced. For English learners to be reclassified, state law requires students to pass English tests, and schools need to get teacher evaluations and seek parents’ opinions, although each district executes this in different ways.

In the camp at Melrose Elementary School in Placentia, students learned more “academic” English words that aren’t used in casual conversation and wrote about what they learned. They did so through arts and science projects, such as creating volcanoes in mini ocean biomes in baby pools, folding origami sea turtles and making fish trading cards with information on each to share with classmates.

In the science camp, students excitedly talked about touching sharks during a trip to the Aquarium of the Pacific in Long Beach, writing speeches for videos about the fish they chose to study and naming the frogs and fish in their ocean-like pool.

The district got help for the camp from the California State University-Fullerton’s SchoolsFirst Center for Creativity and Critical Thinking, as well as the Segerstrom Center for the Arts. The university’s center provided six co-teachers, who taught with district teachers in classrooms of 25 students.

Estrada said organizers looked at research on helping low-income students and wanted to use art to engage them. Plus, they knew that many of the students wouldn’t have opportunities for enrichment, such as scout camp or Vacation Bible School, over the summer.

Heilly Lopez, 10, who is going into 6th grade, said she stayed home with her grandmother, aunt, uncle and cousins for most of the summer. She would play with her dog and watch YouTube videos about video games, Minecraft and do-it-yourself instruction, but she rarely did the projects. So she was thrilled about learning art at camp.

California first in nation to identify long-term English learners, by Californians Together, 2014

“I knew already I was going to be bored all day” at home, Heilly said.

Camp organizers also studied the importance of students making connections with adults other than their parents, so they kept the teacher-student ratio low.

Oscar Cortez, 11, who is going into 6th grade, said he assumed he had to go to the summer program for getting bad grades during the regular year. He said he barely passed math and often got in trouble during the school year. But at camp, Oscar was a class favorite and charmed the teachers.

“I thought it was really a bad thing and I had to do homework,” Oscar said. “When I came here, it was like, awesome. Everybody treats me good here. It was nothing like I thought. It’s like the best school ever.”

Oscar, the youngest of four children, said his parents speak primarily Spanish. His mother has her own business ironing and washing clothes and his father is a cook with two jobs. “I’m teaching my parents English,” Oscar said.

Oscar said he knew how to speak English by kindergarten, but the camp helped him learn about art words and behaviors of fish. He liked to tell the teachers about how he was studying the stonefish, the most dangerous fish. “I’m learning more about the ocean – how to write better, how to draw better,” Oscar said.

District officials said they hope to expand the camp next year and use some of what they learned in classes during the school year.

“It’s some of the most powerful learning we’ve seen among students and teachers across our whole careers,” said Andrea Guillaume, the center’s program coordinator.