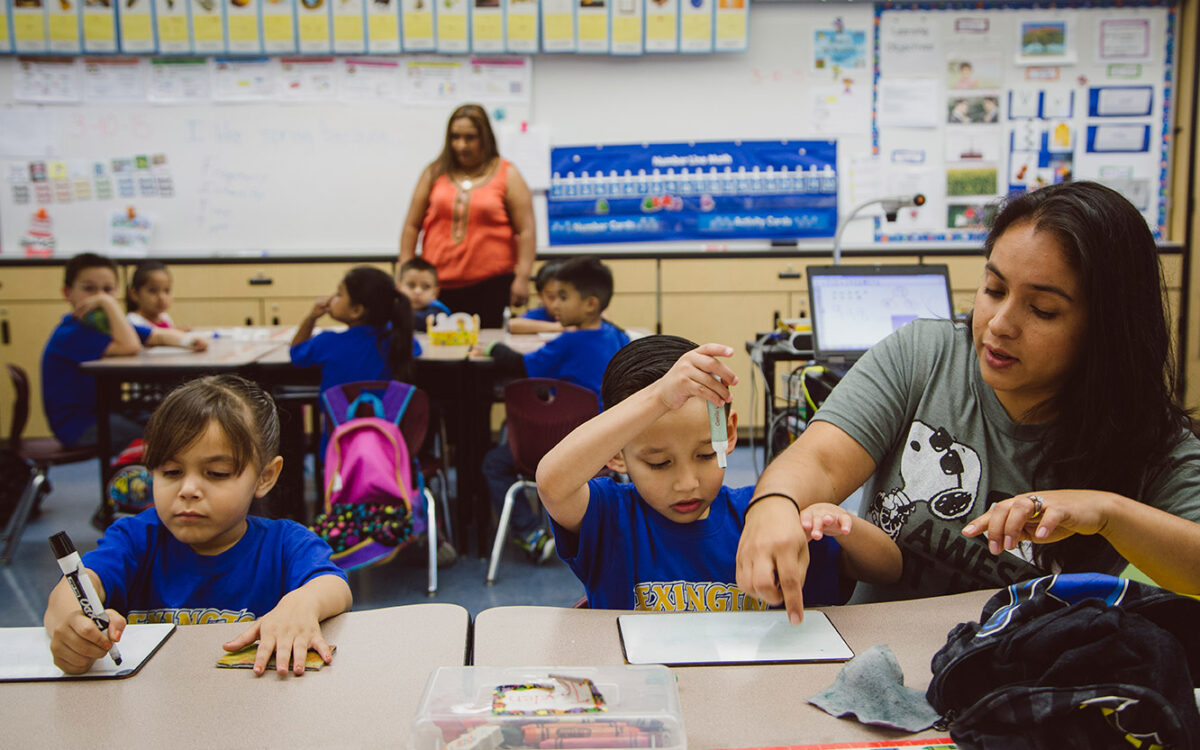 Lexington Elementary School exhibited many of the classic characteristics of schools that wage parent-trigger campaigns in California.

The school had revolving-door leadership, pervasive student bullying, low student expectations and test scores, and dismal teacher morale, according to interviews with parents and teachers.

By the time a local resident called the Los Angeles-based parent-trigger advocacy group Parent Revolution for help in 2013, parent frustration and anger had reached a tipping point.

But parents at the K-12 school never collected a single signature to mount a petition drive under California’s controversial Parent Empowerment Act. They never sought a charter school conversion, either, one of the sweeping structural actions permitted under the law.

Rather, they used the so-called parent-trigger law as leverage. After months of organizing, meeting, and negotiating, the parents, principal, and superintendent signed a memorandum of understanding last May committing to actions including stronger student discipline and improved parent involvement. They even marked the occasion with a huge fiesta.

“We were worried that the district didn’t want to work with us,” Maria Garcia, a member of the Pomona Parents and Community Members Union, said in Spanish during a recent conversation at a local Starbucks, where Lexington parents often gather.

Everyone involved in the negotiations agrees that the threat of using options under the parent-trigger was ever-present throughout the discussions about Lexington. The school is located about 30 miles east of Los Angeles, and about 90 percent of the school’s 600 students are Hispanic and come from low-income families.

“You’ve got to let that (parent) frustration and anger come out,” said Pomona Unified School District Superintendent Richard Martinez. “That’s something you as a leader … get paid to do, to take a few of those hits – sometimes a lot of those hits.”

Today, all parties say they are pleased with the agreement, which included hiring a teacher on special assignment in charge of student discipline, creating three new computer labs, adding extracurricular sports like soccer and basketball, and holding parent education sessions on subjects ranging from nutrition to bullying.

So how did Lexington avoid a full-blown parent-trigger campaign like the one that transformed an Adelanto, Calif., school into a charter, or the divisive petition drive currently underway in Anaheim, Calif.?

The key players involved in Lexington’s negotiations believe it took persistence, a detailed assessment of needs, leadership, and a willingness to accept responsibility for past missteps.

“You’ve got to let that (parent) frustration and anger come out,” Martinez said during a recent interview in the school principal’s office. “That’s something you as a leader … get paid to do, to take a few of those hits – sometimes a lot of those hits.”

That’s not to say that Lexington’s “nontrigger” campaign was easy. During the early stages of the process, the school’s principal left for a position with another district. Over a six-year period Lexington has had five principals.

Compounding the school’s longstanding troubles was the city of Pomona itself. Pomona, where almost a third of residents live below the poverty line, has been grappling with violent crime for years. In January 2014, a man was shot in the park adjacent to Lexington’s heavily gated campus just as students were being dismissed for the day. The school’s principal and security officer ran to the man’s aid while ordering a school lockdown.

“It was very hostile at the school,” Silvestre Maravilla, Lexington’s principal said.

Maravilla, who had been the principal of a Pomona middle school, was hired to take over Lexington in December 2013. Back then, he recalled, “Teachers would sit in their cars in the parking lot waiting for the first bell to ring in the morning. … People didn’t want to be here.”

Initially, district officials weren’t keen on Parent Revolution’s presence in Pomona either, and tried to “blow us off,” said Jesus Sanchez, who was then Parent Revolution’s lead organizer in Pomona. But Sanchez, who is now the chief strategy officer for the private consulting firm Excellent Educational Solutions, said eventually district and school leaders were “brave enough to have honest conversations” with parents.

Once negotiations began in earnest in December 2013, the principal and superintendent attended every meeting with parent union members. For the next 17 hours of meetings, they listened and took copious notes as parents – who had carefully crafted their arguments with Sanchez’s assistance – detailed their concerns. Then Maravilla drafted a strategy to tackle Lexington’s challenges.

A native of East Los Angeles, a predominantly low-income and Hispanic neighborhood, Maravilla said he relates to Lexington’s parents, which made it easier to find common ground.

“(The parents) were really disenfranchised,” he said. “They had every right to be upset.”

One of Lexington’s challenges also involved dismantling an unsanctioned parent-teacher organization chapter on campus, which parents and teachers say heightened tension at the school. Maravilla said the school hopes to start a PTA chapter in its place.

Veteran 6th-grade teacher Michael Mitchell admits some staff members initially were concerned about individual teachers and parents being singled out and criticized. But he said once it was clear that most people involved in the discussions were genuinely trying to serve students, the school community relaxed.

“The (parents) were like the phoenix that rose out of the ashes,” he said.

Lexington always had some good teachers, but a few “didn’t do or couldn’t do all they could do to help students,” parent Liliana Martinez said in Spanish, through a translator. The mother of two Lexington students said she talked with her daughter’s teacher about getting her better prepared for high school last school year, but there was no support outside the classroom.

For his part, Maravilla evaluated every Lexington teacher and had the superintendent’s support to remove two teachers from their positions. Other teachers received additional support or changed grade levels, which he said has boosted their confidence.

To encourage team-building, Maravilla said the office is always stocked with coffee and snacks, and on Fridays, Lexington teachers are encouraged to wear their school T-shirts.

“(Maravilla) has created an environment where teachers and parents are working together,” Garcia said.

During a recent potluck meal with parents for an English-learner advisory committee meeting, Maravilla recalls joking with parents: “Remember how much you used to hate me?”

“We can laugh about it now,” he said, smiling broadly. Then he added: “In the end, we all wanted what was best for the kids.”