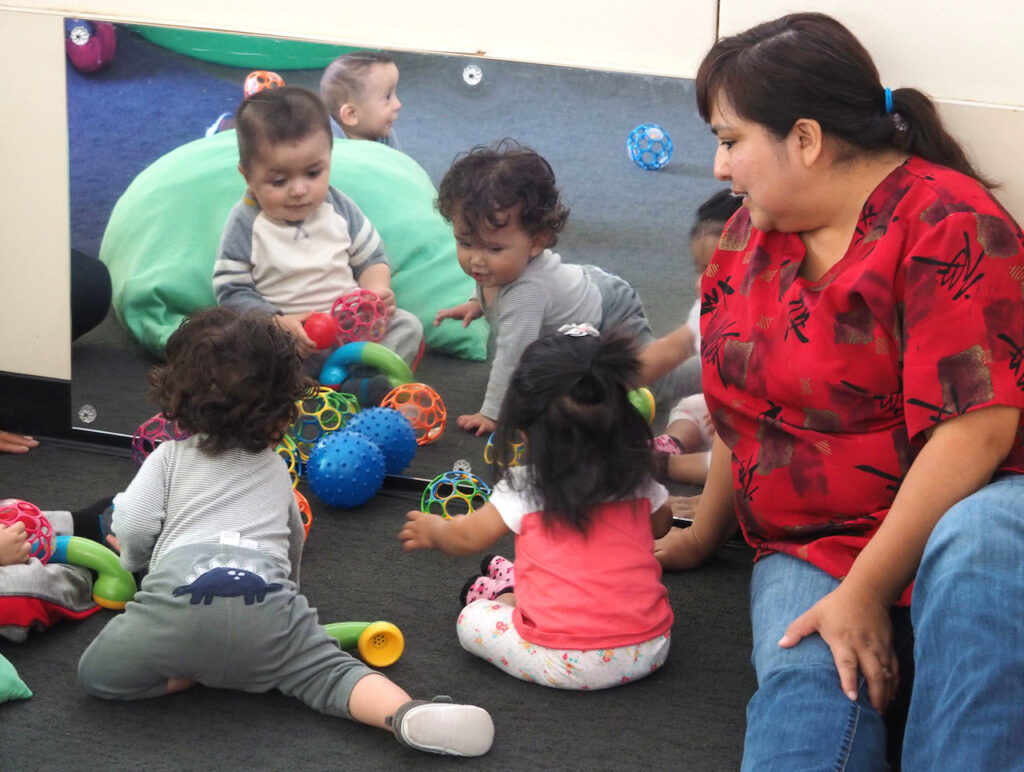 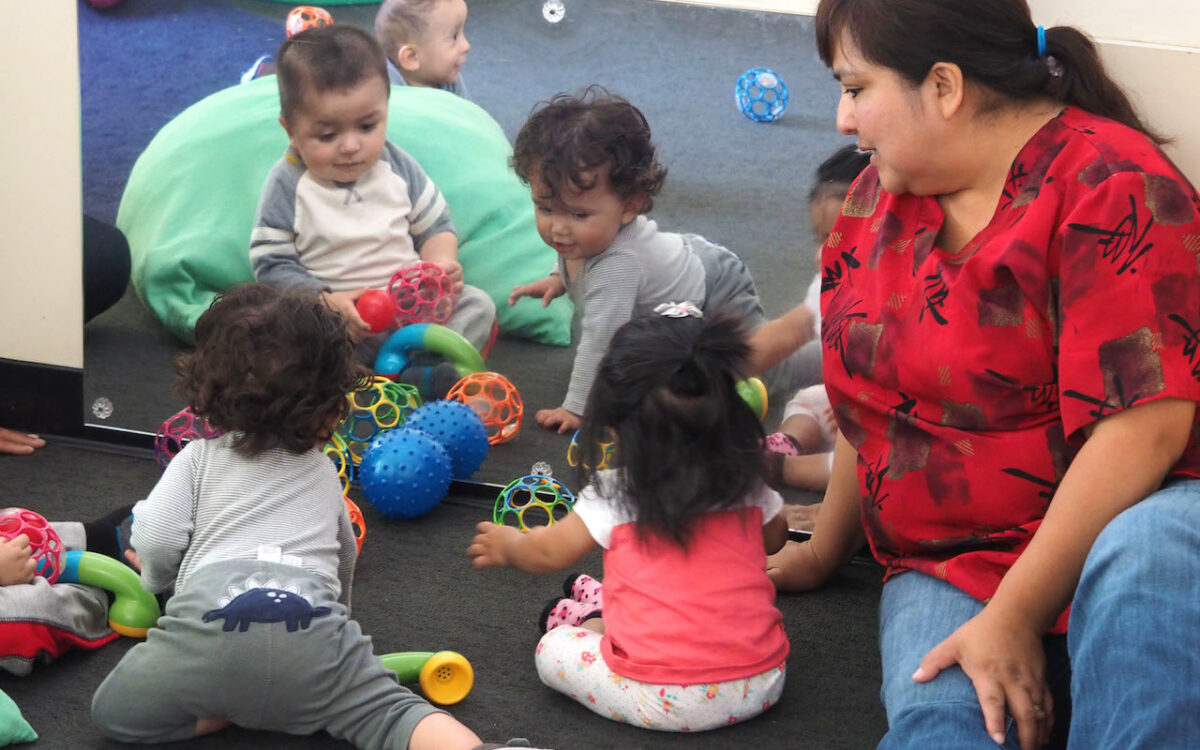 Although school districts’ main responsibility is to serve children in kindergarten through 12th grade, some districts are finding ways to meet the needs of the youngest low-income children who live within their district boundaries – infants and toddlers.

There has been a recent shift in districts’ thinking about the early years, said Moira Kenney, executive director of the First 5 Association of California, a nonprofit organization that supports state-funded commissions in each county that fund programs for children from birth to age 5.

The shift stems from a growing awareness that the achievement gap – the difference in academic success between low-income students and their more affluent peers – begins at birth, she said, and is difficult to address if districts wait until children enter kindergarten.

“Whether it’s First 5 county commissioners or someone else, the issue is being brought to the table and districts have to decide whether they want to get involved,” Kenney said.

Districts and county offices of education that are creating programs for infants and toddlers are relying on state and federal funding, grants from private foundations and their own discretionary funds.

Funding sources are underutilized by districts

Districts throughout California can tap into state funds for child care to support migrant workers, teenage parents and low-income families. But few districts are doing so because the funding is not keeping up with the costs of the programs, which rely on low staff-to-student ratios: one adult for every three infants and one adult for every four toddlers.

Only the Pajaro Valley Unified School District near Santa Cruz and six county offices of education are using money from the state Migrant Childcare and Development program. The funding runs for six months – from May through October – when the parents are working in the fields.

Pajaro Valley received a $2 million grant to renovate its childcare center – now complete with a room filled with bumper-to-bumper cribs for naps, a play kitchen for toddlers, tree-shaded playgrounds for each age group and colorful floor pillows next to a mirrored wall so infants can see themselves. But the district is struggling to keep its center open, said Kathy Lathrop, director of Early Childhood Education and Child Development for Pajaro Valley.

“The staff-to-student ratios are so small,” said Kathy Lathrop, director of Early Childhood Education and Child Development for Pajaro Valley Unified. “That’s the challenge of infant and toddler care everywhere.”

The district almost could not open the infant and toddler sections because of the costs of running the program, Lathrop said. Facing a $100,000 operating deficit, Pajaro Valley is keeping the entire center open – at least for 2015 – she said, as district staff seek grants and other support.

“The staff-to-student ratios are so small,” Lathrop said. “That’s the challenge of infant and toddler care everywhere. It would be a heartbreak to lose that facility and program.”

If the center closes, parents say they may have no alternatives that are safe and stimulating. Sandra Zabala, a single mother who picks strawberries, has her 2-year-old daughter, Kenia Ceja, in Pajaro Valley’s toddler program. She said, through a translator, that she knew of no safe place to leave her daughter if the program were closed.

Yesenia Calderon, who picks raspberries and whose son Diego Ortiz, 2, is also in the toddler program, said through a translator that Diego now knows the names of colors and how to count to three.

“If I couldn’t leave him here, Diego would be behind in his learning,” Calderon said.

Los Angeles Unified invests $1 million in its Cal-SAFE program, which funds four centers in neighborhoods within district boundaries that have the highest rates of teen pregnancy, said Maureen Diekmann, executive director of the Early Childhood Education division. The district restricts the program – which can serve 72 children – to parents enrolled in one of its high schools.

But statewide, only 44 districts and county offices, down from 158 before the recession, are providing a Cal-SAFE program for their teenage parents, said Trudy Adair-Verbais, director of Child Development Programs for the Santa Barbara County Office of Education, who has been monitoring participation in the program.

One of the primary reasons for the decrease, Adair-Verbais said, is that funding for the Cal-SAFE program used to be restricted to that program. Now the funding is part of districts’ Local Control Funding Formula and can be used for any educational purpose. In addition, she said, funding has been capped at 2007 levels, forcing districts to cut back or use other funding sources to keep up with a rising minimum wage and employee health care costs.

Another state funding source for infants and toddlers is the General Child Care and Development program, which funds district child care centers. It is also underutilized, she said, because the standard reimbursement rate was established many years ago and remained stagnant for about a decade until the 2014-15 and 2015-16 budget years, when funding was increased by 5 percent each year.

Currently, only 53 districts and county offices take advantage of this funding, according to the California Department of Education. And those that are using the funds typically have small programs. The Santa Barbara County Office of Education serves 15 infants and toddlers. The San Diego Unified School District provides full-day care for 80 toddlers.

Districts can also work with First 5, a state program created by the passage of Proposition 10 in 1998. Funded by taxes on tobacco, First 5 revenues are declining because fewer people are smoking. Districts that use funding through First 5 primarily spend it on preschool, which serves 3- and 4-year-olds.

Elk Grove also provides comprehensive screening of children for developmental delays, Pinkerton said. Altogether, the district is serving 143 families of infants and toddlers this school year and plans to expand the program next year, she said.

Districts can also provide federally funded programs such as the federal Migrant Education Program and Early Head Start, a program for children from birth to age 3. Statewide, 14 districts and six county offices of education use federal funds to run their own Early Head Start programs, together serving 1,447 children, according to Paula Carrino, IT and project manager for the California Head Start Association. Those districts include Long Beach Unified, which has a program for 148 children.

Spurred by research that shows the importance of early life experiences in the development of the brain, The David and Lucile Packard Foundation is providing $500,000 each year for 10 years to Oakland Unified, Fresno Unified and the Franklin-McKinley School District in San Jose to develop early education programs.

“There is a substantial amount of research that shows that babies who are neglected will be significantly developmentally delayed,” said Ruth Quinto, deputy superintendent at Fresno Unified. “If we don’t make a conscious community effort to reach out to at-risk families, we’re turning our backs on these children who will be in our schools. The connections in the brain are not there, and we’re not going to get them back.”

Oakland Unified is initially focusing on preschool students, said Andrea Youngdahl, a consultant for the foundation. But the district is also expanding its early screening and assessment program for younger children to address developmental delays and plans to do more for the youngest children after the preschool program has been developed.

Both Fresno and Franklin-McKinley are including infants and toddlers from the beginning of the grant period.

John Porter, Franklin-McKinley’s superintendent, and his staff are establishing a children’s zone in the 40-block neighborhood surrounding district schools that is modeled after the Harlem Children’s Zone, a program launched in the 1990s to address all the issues that children face, such as decrepit housing, gang activity and chronic health problems.

This fall, the district will open a child care center, run by Educare, a nationally recognized child care provider, for 200 students from infancy to age 5. The Educare model has made inroads in closing the achievement gap, according to an independent study by researchers from the University of North Carolina, Chapel Hill. They found that children who enrolled in the centers before age 2 nearly caught up to their more affluent peers on measures of school readiness, such as vocabulary acquisition, by the time they entered kindergarten.

But the center will not have enough slots for all the children in the K-8 district’s boundaries who need it, Porter said. So the district is using its own funds and funding from First 5 to train neighborhood daycare providers in how to stimulate young children mentally and physically. The new center and the Packard grant will allow the district to be more systematic in reaching all children in the 40-block neighborhood, he said.

Porter said the district began building a children’s zone during the recession, relying on community partners, such as the city, police, the Second Harvest food bank, Catholic Charities and First 5.

“The research is stunning on early childhood education,” Porter said. “If there is any one thing that will deal with the achievement gap successfully, this is at the top of the list.”

Fresno Unified also invested in early education during the recession, working with groups such as First 5 to support child care centers and training for private child care providers. The Packard grant, $350,000 from First 5 and $100,000 from the district’s unrestricted funds will allow the district to develop a citywide system that will tie together early childhood educators, from the stay-at-home mom to the preschool teacher.

From Neurons to Neighborhoods: The Science of Early Childhood Development, The National Academies Press, 2000

Zero to Three, National Center for Infants, Toddlers and Families

Fresno will be providing a website with recipes, physical education activities and other projects to engage young children, Nathies said. The district will also teach parents how to provide positive guidance to children, tell stories, respond promptly to verbal and nonverbal communication and build language.

“Many cultures and populations don’t send their children to daycare or preschool,” Quinto said. “We want to get authentic parent engagement.”

The program will also provide screening for developmental delays and access to health care for infants and toddlers.

“I don’t judge folks who walk away from it,” Hanson said. But, in the years to come, “I’d be interested to compare Fresno to some who thought early education was too expensive,” he said.