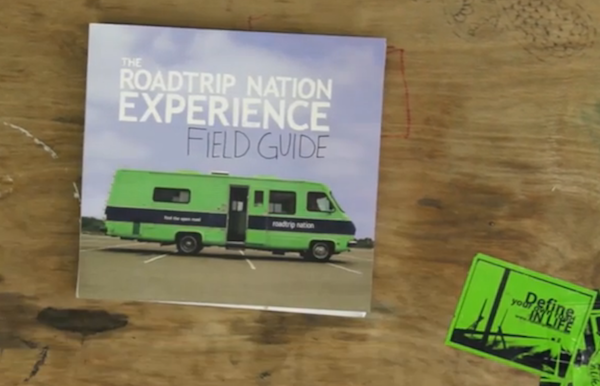 Decisions about college majors, careers and fields of study are daunting for most young people, but for students who have lost their way in traditional schools, the choices can be even more difficult.

A number of alternative high schools for students at risk of dropping out are finding success in a program inspired by a popular public television show. The program, The Roadtrip Nation Experience, helps students reconnect with their futures and opens their eyes to the possibilities of college and careers, educators said.

“This is one of my favorite classes to teach,” said Jose Rosales, a teacher at Bowman High School in Santa Clarita, who has used the Roadtrip Nation program for several years. Bowman is a continuation high school that serves juniors and seniors who are at risk of not graduating because they haven’t passed or completed enough courses, often because of high absentee rates, or who weren’t thriving in traditional schools.

The students “are kind of lost when they come to this school. They don’t know what to do,” Rosales said. “This gives them time to reflect and teaches them about stepping outside their comfort zone and taking risks.”

The program is inspired by Roadtrip Nation, a reality television show in its 11th season on PBS. The show follows young adults, typically college students or recent college graduates, as they travel across the United States in an RV on a career exploration journey. Along the way, the travelers interview people about their jobs and their passion for what they do.

“It made me realize I shouldn’t fear anything and that I just needed to take action and step it up,” said Bowman High School senior Diana Flores, 18.

In 2007, the organizers launched the Roadtrip Nation Experience, a 12-lesson career exploration program for high schools designed to get students thinking about their futures and how they might pursue their interests.

The program offers lessons in self-reflection, overcoming failure, self-confidence, exploration of personal interests and introductions to various careers, and culminates in a personal interview. Students are asked to identify a person in a career field they’d like to explore and then must sit down with that person to ask them about how they got where they are. Many of the interviews are videotaped, and the videos become learning tools and inspiration for future students.

More than 100,000 students across the nation have participated in the program, but the effort is expanding into schools serving at-risk youth through the help of a $1.5 million grant* from AT&T Aspire that is providing the curriculum free of charge to alternative schools throughout California.

The program helps expose students to messages they don’t often hear and shows them how to connect their interests to future jobs, according to teachers who use the program.

“My students are from very low socio-economic backgrounds, and a lot of their parents don’t have jobs, or their parents are working retail or on the night shift, cleaning stuff,” said Jessica Hoyt, a teacher at Willow High School, a continuation school in Crockett in Contra Costa County. “They really don’t know of all the potential careers that are out there that are matched to their interests; they just know of stuff they see in the community. One of the videos we watched talked about careers putting music with choreography. They had no idea that actually existed as a career.”

One of the strengths of the program is the interview component, which pushes students out of their comfort zone. Students must identify a potential interview subject in a particular profession, set up the interview through a series of cold calls, devise a series of questions, and then sit down with a stranger to complete their assignment.

“When dealing with at-risk youth, they don’t want to be exposed,” said Elizabeth Moore, a teacher at Back Bay High School, an alternative high school in Costa Mesa. “They are so desperately trying to blend in and not make a point of being in the room. Getting them to talk to someone, an adult, they are so uncomfortable with it.”

The interviews are revealing for students, who often ask their subjects questions that expose many of their own personal thoughts and fears. “Do you ever mess up?” “Are you ever afraid?” and “Did you ever want to give up?” are common questions – along with the ever-present “How much do you make?” said Jason Manion, outreach manager with the Roadtrip Nation Experience.

“A lot of the students we find are thinking about going into the theater or acting or a lot of different occupations that come with a lot of pressures, and they have people saying, ‘You’ll never make it doing that,’ or ‘You’re not good enough,’” Manion said. “We find so many students use this not only to figure out their career, but how to ask those questions like, ‘How do you overcome risk?’”

Diana Flores, an 18-year-old senior at Bowman High School, said the class taught her a lot about overcoming failure, standing up for herself and helping her figure out her interests.

“It made me realize I shouldn’t fear anything and that I just needed to take action and step it up,” she said. “I learned to do things on my own and not be afraid to think.”

A shy student, Flores said the interview – of a woman in the fashion industry – was difficult for her. “I’ve never done it before,” she said.

After the interview, she realized it wasn’t so hard and it gave her confidence when dealing with other adults, whether she’s asking for information on financial aid programs or how to select classes when she goes to College of the Canyons in the fall.

“I’m not afraid to communicate any more, or ask questions,” Flores said. “I just learned not to stay quiet.”

In fact, the Roadtrip Nation Experience earned high marks for promoting just those types of skills in a 2012 study of the program by the Educational Policy Improvement Center in Oregon. The center is founded by David Conley, an expert in promoting college and career readiness skills in students; these skills have gained an increased focus in California and nationally under the new Common Core State Standards being implemented in California schools.

The Roadtrip Nation program had a positive impact on students’ self-efficacy, problem solving and critical thinking skills, said the study of students who participated in the program at three San Jose Unified School District PLUS Academy campuses. Further, the use of “word play, analogy and real-world connections” helped students master core academic content, the study said, and participants were more likely to feel that what they were learning in school was important for their futures, compared with students who did not participate in the program.

Evaluation of Roadtrip Nation by the Educational Policy Improvement Center

Roadtrip Nation students also posted higher grade point averages than those who weren’t in the program, the study found. The GPAs of program participants increased from an average of 2.35 to 2.75 by the end of the school year, compared with 2.6 for other students, the study said – an interesting finding given that the program does not focus on academic achievement.

“The Roadtrip Nation Experience does, however, focus squarely on the behaviors, attitudes and strategies – termed ‘noncognitive’ factors by educational researchers – that hold a direct positive relationship to students’ concurrent and future outcomes,” the study said.

The self-reflection and critical thinking skills align well with the Common Core, said Robin Geissler, principal of Bowman High School, which has been recognized several times by the California Department of Education as a “model” continuation high school.

“The class does a wonderful job just getting the students to think about themselves, which is difficult for young people who have been kicked out of their schools for academic issues,” he said. “… It makes them value what they have and [see] what they need to do to move forward.”

*Correction: A previous version of this article misstated the dollar amount of the grant from AT&T Aspire.