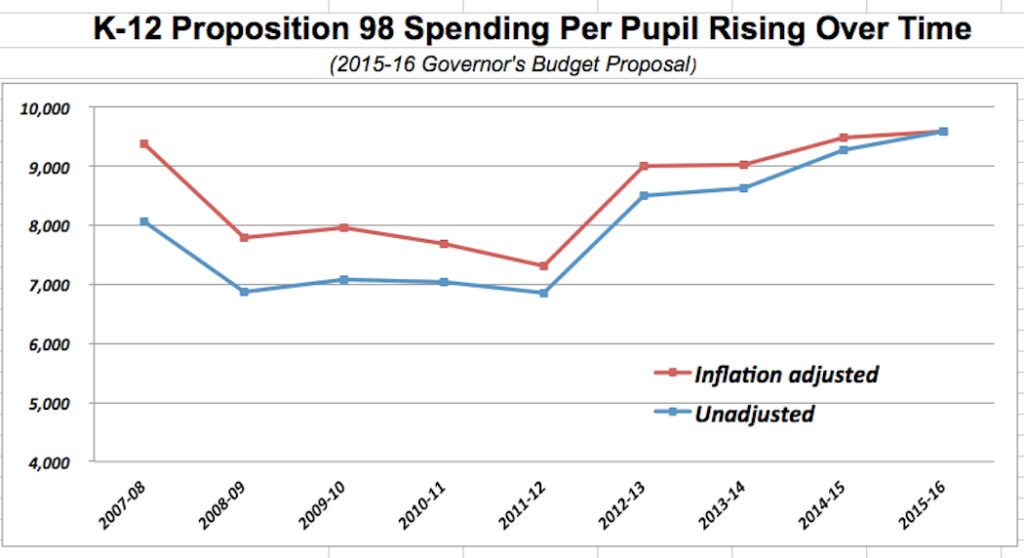 Californians are evenly divided on whether the state should extend the temporary tax increases approved by voters under Proposition 30 that have helped lift schools out of the recession, according to a survey released Wednesday.

The measure, approved by voters in November 2012, is raising more than $7 billion annually from sales and personal income taxes, which has allowed the state to repay much of its debt to schools and provide additional funding. Increases in state money for K-12 schools and community colleges are expected to slow after the quarter-cent sales tax expires at the end of 2016. If not extended, revenues generated through the proposition will end when the personal income tax increase for wealthier residents expires in 2018.

However, Gov. Jerry Brown has repeatedly called Proposition 30 a temporary tax and does not support extending it.

Brown’s job approval rating of 61 percent of those surveyed is a record high for him, according to PPIC, and the poll showed strong bipartisan support of his budget, including his emphasis on paying down the state’s debt rather than restoring funding for social services.

“Budget worries are finally subsiding in California,” said Mark Baldasarre, PPIC president and CEO in a statement about the poll.

Dean Vogel, president of the California Teachers Association, one of the primary supporters of Proposition 30, said the fact that half the voters would support an extension is “pretty good” considering there has been no campaign to do so.

As the state recovers from the recession, people “are feeling a bit more hopeful, but they understand we have a long way to go to get to where we want to be,” Vogel said.

Vernon M. Billy, CEO and executive director of the California School Boards Association, said the numbers “represent a solid foundation for the education community to build upon in making a case for education funding adequacy.”

However, the poll found that only a third of responders were aware that most of the state’s funding comes from personal income taxes. And only 15 percent understood that K-12 education comprises the largest share of the budget.

The survey was conducted from Jan. 11–15 and included 1,705 adult California residents.