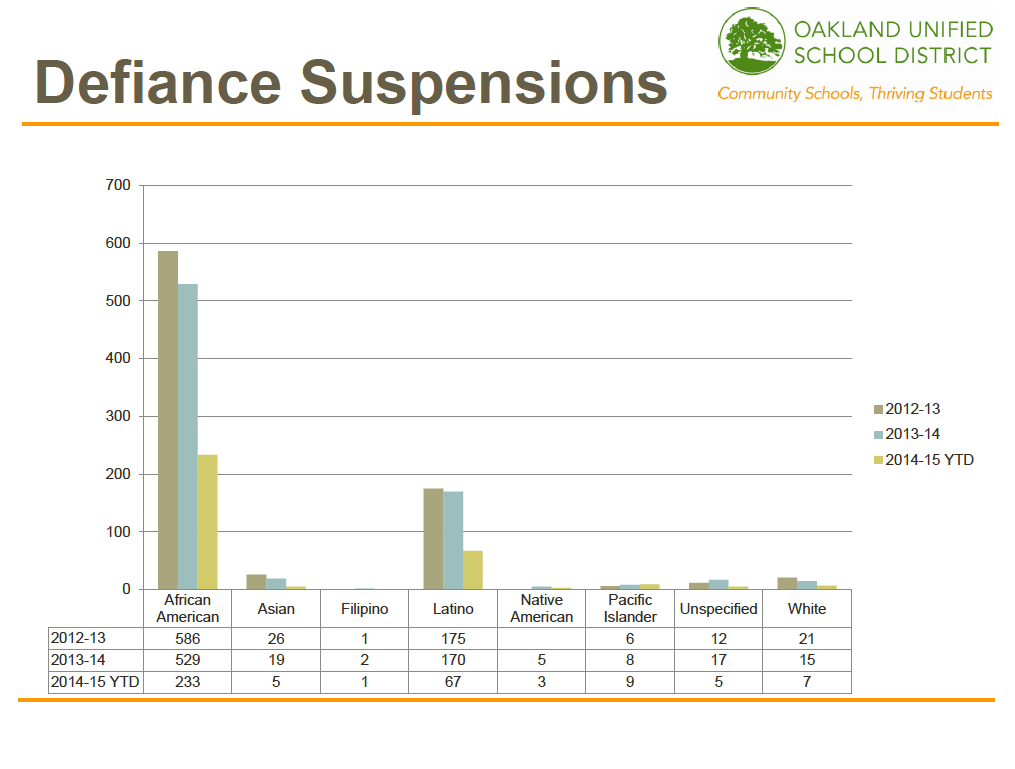 A proposal hammered out by district staff, teachers and community groups would eliminate willful defiance as a reason to suspend grade 4-12 students in Oakland Unified beginning, at the latest, in the 2016-17 school year. Since January, state law forbids all districts from suspending or expelling K-3 students for this reason.

The proposal – which comes before the district’s school board for a public hearing at 5 p.m. Wednesday – would also prevent administrators from expelling students for willful defiance or disruptive behavior and from forcing students who misbehave to transfer to another school. A final board decision on the resolution is expected in May.

Willful defiance has been controversial in California because it has been used disproportionately to suspend African-American students and, opponents charge, has become a catch-all for behavior ranging from not turning in homework to cursing a teacher.

If Oakland’s board approves the resolution in May, it would follow L.A. Unified, San Francisco Unified and Pasadena Unified, which have already eliminated willful defiance as a reason to suspend students. Azusa Unified is phasing it out over three years, beginning with the lower grades.

The community groups who worked with Oakland Unified on the policy include the Oakland-based Black Organizing Project and Public Counsel, a public interest law firm based in Los Angeles that has worked with districts throughout the state to eliminate willful defiance. Mirishae McDonald, a history teacher at Claremont Middle School in Oakland, said that having the option of suspending a student for willful defiance “is not useful at all.”

If teachers eject students from the classroom for little things, that undermines their effectiveness as a leader, McDonald said. “Students stop trusting the teacher,” she said.

Besides eliminating willful defiance as a reason to suspend, community groups also want to halt the hiring of any new school police officers and allocate $2.3 million to expand alternative disciplinary practices, such as restorative justice. The district staff recommendation calls for expanding alternative practices, but it does not cite a specific dollar amount.

Trish Gorham, president of Oakland Education Association teachers’ union, said that $2.3 million seems like a reasonable amount and that as long as no police officers are laid off, the union supports the community’s demands.

“We really don’t want more of a police presence at school sites,” Gorham said. “There are other ways to engage students rather than through the threat of police.”

Gorham said teachers have found that the alternative disciplinary practices “when done appropriately, have been proven to be effective.” She said her only concern is if the roll-out of the alternative practices happens so quickly that the district is unable to hire highly trained staff.

“We do believe in the practices and we would like to see more,” she said. “But will it be high-quality across the district?”

Teachers are already implementing alternative practices, such as having a restorative justice circle at the beginning of the day so students can discuss any issues that are bothering them, Gorham said. This approach is important, she said, so that students “are not holding on to the trauma that they walked into school with and are ready to learn.”

“It’s almost mandatory now,” Gorham said. “You have to do that ‘exhale’ within the school so that you can continue through the day.”

Michael Ford, the parent of a high-achieving 9th grade student at Coliseum College Preparatory Academy, says students who are having problems need more tutors, counselors, and mentors, not more police.

“We need someone who can help them and keep them in a positive attitude,” Ford said. “People say police can act as counselors. Well, if they want to be counselors, let them apply through the school district, not through the police department.”

A poll of 400 Oakland voters in March by Fairbank, Maslin, Maullin, Metz & Associates – which was commissioned by Public Counsel to find out how residents felt about safety and schools – found that although community members favored more police on the streets, only 26 percent thought that having police in public schools played a major role in keeping the community safe. The vast majority of those polled said that providing young people with positive mentors, quality after-school programs, access to good health care and a good education were major factors in having a safe community.