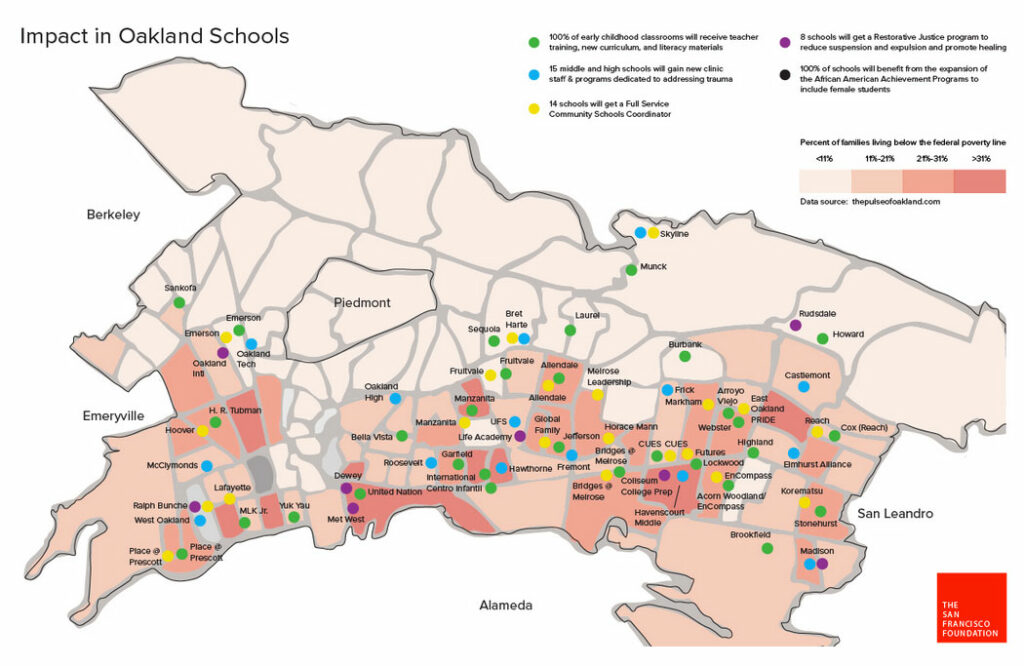 An anonymous donor seeking to improve Oakland is investing in education. Nearly a quarter of the donor’s $34 million gift made this week to city organizations is targeted to school discipline reform, trauma care for students and early education teacher training and materials.

The donor reportedly cold-called the San Francisco Foundation earlier this year to float the idea of the gift and to ask Fred Blackwell, chief executive of the philanthropic foundation, to help disperse the funds. The focus of the grants is on “scaling proven solutions” to academic and economic obstacles faced by Oakland residents, according to a news release from the foundation, which donates grant money to nonprofits throughout the Bay Area.

The upshot is an $8 million gift to Oakland schools for what the foundation described as “a preK-12 system of support.” The donor requested that the money be put to work this summer.

“We have a chance to have a very direct, immediate and positive impact on Oakland schools and families,” said Troy Flint, spokesman for the Oakland Unified School District.

“We have a chance to have a very direct, immediate and positive impact on Oakland schools and families starting this school year and continuing for quite some time,” said Troy Flint, spokesman for the Oakland Unified School District.

The work will include schoolwide screenings, support groups and support for teachers to help students cope with the effects of severe trauma, according to the Alliance.

According to the San Francisco Foundation and Oakland Unified, the funding means that:

Oakland schools also will benefit indirectly from the donor’s new grants to nonprofit organizations that serve youth, Flint said. Those grants include $1.3 million to the Destiny Arts Center, $1 million to the East Oakland Youth Development Center and $2.5 million to Youth Uprising, a community center for health services, arts programs and education support.