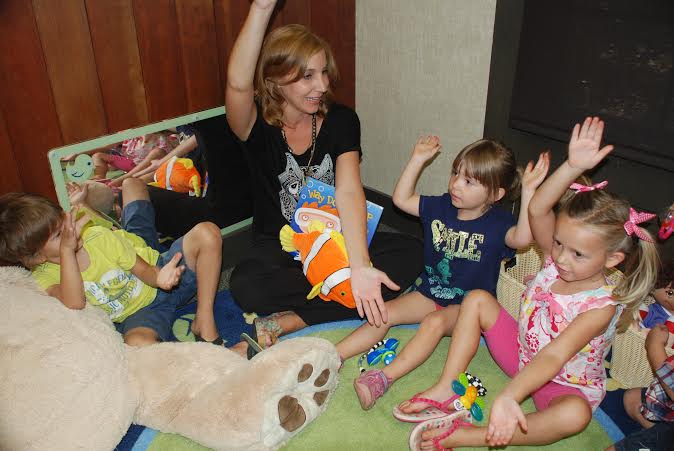 Photo courtesy of El Dorado Library
Christina Roseli of the El Dorado public library leads a group of toddlers in a story about sea creatures.

Photo courtesy of El Dorado Library
Christina Roseli of the El Dorado public library leads a group of toddlers in a story about sea creatures.

Children typically come to the library to be read to, but Christina Roseli of the Placerville Library in California’s Gold Country is reversing that dynamic.

Instead of the children going to the library, she is going to them, in a one-of-a-kind program in California.

Several days a month, Roseli, an early childhood literacy specialist, drives miles from the library to rural areas of the sprawling county, where she sings and reads to children in family child care homes, which are small day care centers where the adult residents of the homes are the care providers.

Roseli and three other library employees in El Dorado County’s traveling program, known as Early Literacy on the Move, visit three dozen day care homes each month. The outreach is a small but innovative part of a statewide effort to improve the quality of day care centers, as California moves to implement what it calls a Quality Rating and Improvement System for programs serving children from birth to 5 years old.

El Dorado County’s library program, launched in November, comes as counties across California are expanding efforts to improve the quality of thousands of early education programs, including many that serve infants and toddlers.

The rating system is intended to provide an objective measure of how well a program is performing, and to encourage it to improve. Whether that happens will depend on the willingness of county agencies and other local care providers to participate in the process.

Much of the quality-rating system’s success rests on the willingness of county agencies and local care providers to participate in efforts to improve programs in their areas. In El Dorado’s case, the library “came to us and asked, ‘How can we help?,’” said Kathleen Guerrero, executive director of First5 El Dorado, whose agency provided a $48,000 grant to fund the literacy outreach project.

The county’s library system has played an important role in promoting reading in the county generally – so much so that in 2012 El Dorado County had the highest percentage, among all California counties, of parents (79 percent) who said they read to their children daily, according to a Children Now survey.  (The county was edged out by Marin County, which reported 81 percent in a 2014 survey.)  The County Office of Education has described the six-branch library system as a “model for California” in promoting literacy, especially among young readers.

“It’s great for people to know that the library is still a vital part of kids’ lives,” said Christina Roseli of the Placerville Library.

El Dorado County’s quality rating program, known as High 5 for Quality, serves 89 licensed providers in the county, or 58 percent of the total, Guerrero said. Those sites include 36 family child care homes that receive support from the library. The county’s goal is to bring the library’s outreach efforts to 85 percent of its licensed early learning providers.

Home care providers “were very engaged from the start,” Guerrero said. The providers received visits from reading specialists such as Roseli, which have been “a pleasant time to spend with the kids and engage in activities such as finger puppet play,” she said. Providers also benefit by being able to check out books, toys and other materials from the library.

In addition to reading to children, library employees also serve as mentors to the adults who run the family child care homes during their home visits, said county children’s librarian Jan Robbins. The visits “validate what the providers are doing,” Robbins said, and motivate providers to do quality work.

Esther Warner, who runs a small family child care home with her husband in Placerville, said the home visits have taught her how to present daily story times to the seven children in her care, who range in age from 3 to 6 years old. “It’s one of the kids’ favorite times of the day,” she said. “They want to hear the stories. They ask: ‘What does this word mean?’”

“We make sure kids are ready for kindergarten,” added Warner, whose home is going through the ratings process. Some of the older children in her home are beginning to read, she said. “That excites parents.”

On one of her trips this summer to a rural child care home, Roseli engaged a half-dozen children, including infants and toddlers, in a fingerplay – a nursery rhyme that uses hand movement and words to convey a work lesson using their eyes, ears and voices. Her lesson was about ocean creatures:

One boy was so enthusiastic about the monthly visits that he “dragged his mother to class,” Children’s Librarian Jan Robbins said, adding: “Little kids come, and so do their parents.”

The “story times,” as they are known, teach children literacy skills that are aligned with state guidelines for preparing children for kindergarten.

Teachers in the library’s home-visit program use state curriculum, which emphasizes letter sounds, vocabulary, knowledge of letters and ability to understand that stories have a beginning, middle and end, said Robbins.

Parents, too, are getting involved in the home visits, Robbins said, sometimes after getting a nudge from a child. One boy was so enthusiastic about the monthly visits that he “dragged his mother to class,” Robbins said, adding: “Little kids come, and so do their parents.”

Robbins said she hopes that kind of enthusiasm will carry over to other early education projects in the Early Literacy on the Move program, such as one that would use story times to help children begin to learn about science, technology, engineering and math.

At least one of the recent library story times was about science, Guerrero said, “with stories about construction and building things.” El Dorado County is considering an early education STEM curriculum based on the state’s math, science and art guidelines for early education.

For Roseli, the best part of her job is getting out to visit kids whose families may never make it to the library. “It’s great for people to know that the library is still a vital part of kids’ lives,” she said.

Some frequently asked questions about the rating system

California’s Quality Rating and Improvement System, or QRIS, is a rating system in which local educational agencies, such as First5 and county offices of education, assess preschool programs on a regular basis. Ratings for individual programs will be posted online, and are intended to be a guide for parents as they consider which early learning programs are best for their children. The goal of the ratings system is to provide children in the state with more high-quality programs.

How is the rating system funded?

In 2012, California was awarded a $75 million grant from the federal Race to the Top-Early Learning Challenge grant, a portion of which was targeted to establish a quality-rating system for early-learning programs serving children from low-income families.

In 2014, the California Legislature approved $50 million a year in Proposition 98 funds to support quality-improvement efforts on an ongoing basis. In June, state lawmakers approved another $24 million in one-time funding for the quality rating system. The new funds must be spent by Sept. 30, 2016.

The funds are intended to boost quality-ratings efforts in 45 of California’s 58 counties, including El Dorado County. Those counties serve 90 percent of the state’s low-income preschoolers.

How does the rating system work?

The system will assign a rating of 1 to 5, with 5 being the highest rating. Ratings are based on a number of factors, including the ratio of children to teachers, whether the schools provide a safe and healthy environment and support for a child’s physical and social well being, and whether directors and teachers receive training in early childhood development and learning.

How will the impact of the rating system be measured?