Districts urged to close diversity gap between teachers and students 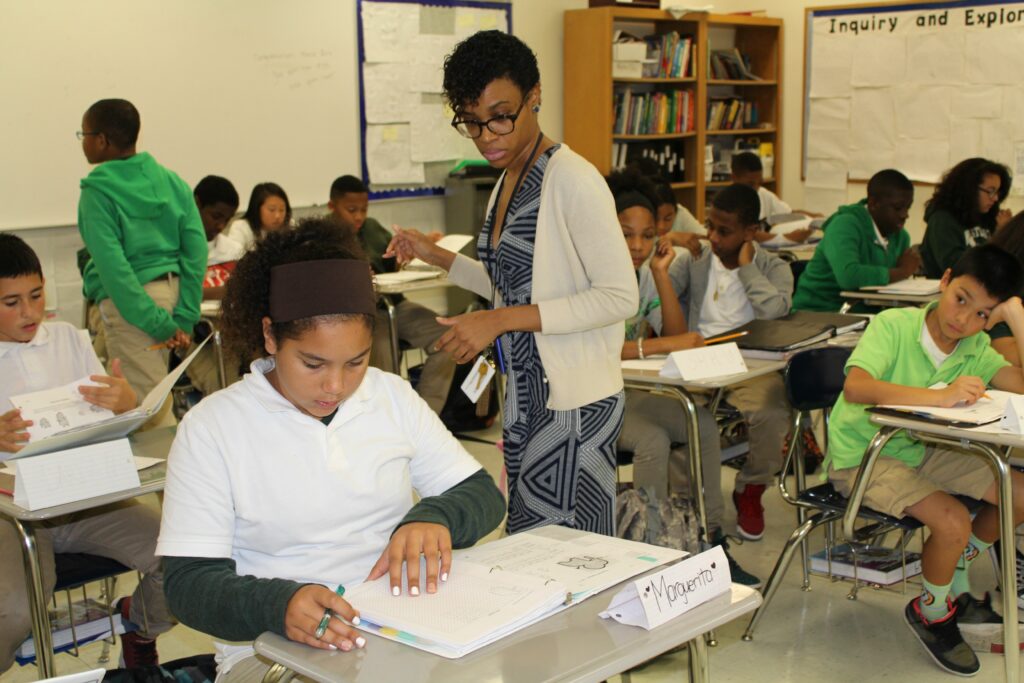 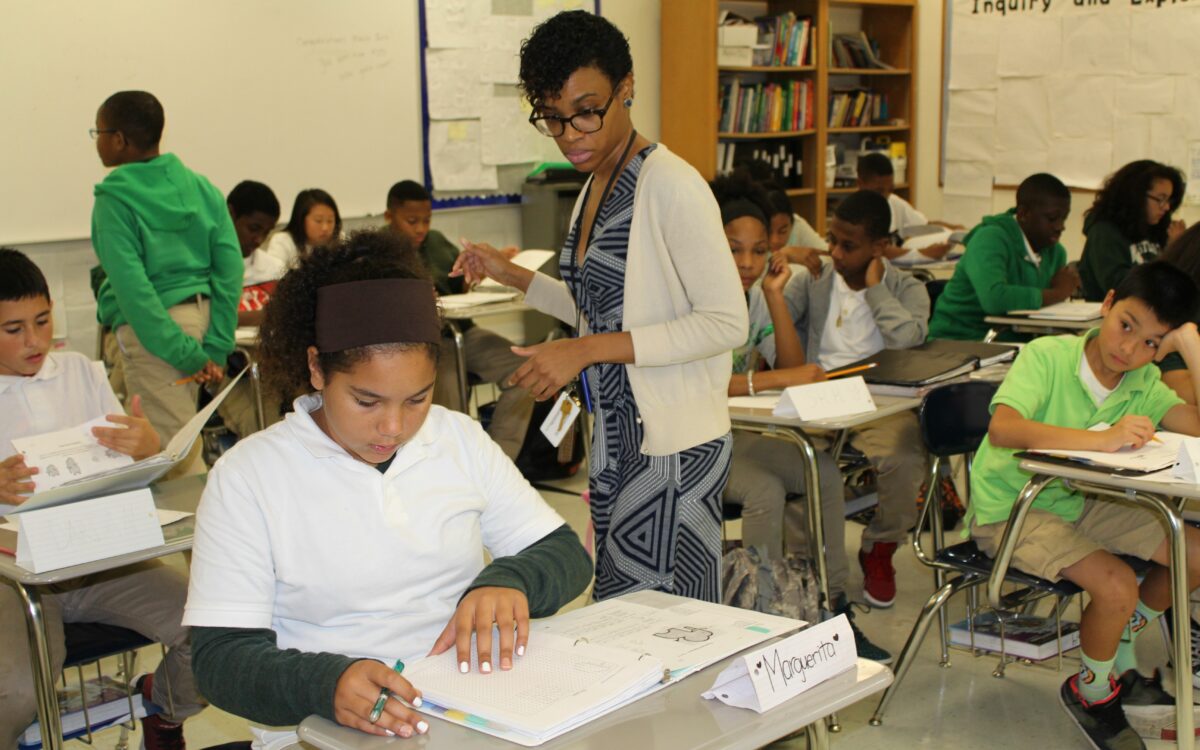 A new report on teacher diversity is urging urban school districts to put more energy into ensuring that educators reflect the racial and ethnic backgrounds of their students.

The study released Wednesday by the Albert Shanker Institute shows a large diversity gap exists nationwide between students and teachers, with 44.1 percent of all students identified as minorities in 2012, compared to only 17.3 percent of teachers. The gap is most dramatic for African-American and Latinos, the report found.

“Diversity is a key component to equality and opportunity,” said Randi Weingarten, president of the American Federation of Teachers and a member of the institute’s board of directors. “Where there’s a diverse teaching workforce, all kids thrive.”

• The percentage of African­-American teachers has declined dramatically and teachers of color overall – especially men – are under­-represented in urban schools.

• The percentage of Latino teachers is not keeping pace with the fast-­growing Latino student population, although it is increasing in some areas.

• The teacher-­student diversity gap is greater in charter schools than in traditional district schools.

• The biggest obstacle to teacher diversity nationwide is attrition, with teachers of color leaving because they do not feel they have a voice in school decisions and they feel that they lack autonomy.

• All students benefit when taught by educators from diverse backgrounds because that helps prepare them for success in a diverse world and can help to reduce stereotypes.

Los Angeles stood out in the report for its high rate of growth in the number of Hispanic teachers between 2002 and 2012 when compared to the other eight cities: San Francisco, Boston, Chicago, Cleveland, New Orleans, New York, Philadelphia and Washington DC. However, the report said more Hispanic teachers are needed to close the diversity gap in Los Angeles.

• The U.S. Department of Education collect and report on the race and ethnicity of teachers in all public schools as part of its Civil Rights Data Collection.

• States collect data from all public schools on the race and ethnicity of teachers, and make it available to the public.

• States review education-­related laws and policies related to their impacts on teacher diversity, with amendments as needed to promote a more diverse teaching force.

• Federal and state officials provide incentives for partnerships between colleges of education, school districts and charter networks to provide mentoring, support and training in culturally responsive practices to all new teachers working in high­-poverty schools.

• Support for “grow your own” teacher preparation programs and “career ladder” programs for teachers’ aides seeking to become educators.

• The inclusion of teacher diversity programs such as career ladders in union negotiations.

• The inclusion of teacher diversity in district accountability measures.

• Partnerships between districts and colleges of education to increase the supply of well­-qualified African-American and Hispanic teachers prepared to work in city schools.

• The creation of programs to recruit and support African-­American and Hispanic teachers by districts, schools and charter networks.

The report highlighted several recruitment and retention programs that could serve as models for others, including the Boston Teacher Residency, Grow Your Own Teachers, and Teach Tomorrow in Oakland. Both the Los Angeles and San Francisco unified school districts offer programs similar to the Boston program. That program consists of teacher residents working with mentors in public schools for one year while completing master’s degrees at the University of Massachusetts-Boston then becoming full-time teachers after graduating and making a commitment to stay for at least three years.

Justo Avila, chief human resources officer for Los Angeles Unified, said minorities now comprise about 60 percent of the district’s teaching force. And although the Latino student population has grown to 74 percent this year, he said the district does not believe its percentage of Latino teachers should be that high, because its students need exposure to educators from a wide variety of backgrounds.

“They need to see and hear perspectives that are not just from Latino teachers,” he said. “They need to learn tolerance and how to work with others across the nation and I think having diversity helps you get there.”

Los Angeles Unified’s career ladder program is helping to increase teacher diversity by supporting teachers’ assistants who want to become educators with tuition assistance and preparation for prerequisite exams, said Debi Ignani, deputy chief human resources officer. The district continues its support for them while they are getting their education and then hires them when they graduate, she said.

The district also offers its own accredited two­-year teacher preparation program largely for people who live in the community. In addition, it provides an urban teacher residency program in partnership with UCLA, and the California State University campuses of Domingo Hills, Northridge and Los Angeles. The program offers specialized teacher’s credential pathways in math, science and special education through an apprenticeship model that gives teacher residents the opportunity to “co-teach” with mentors for a year while earning master’s degrees.

“They are our pipeline,” Avila said. “We make sure that they’re supported. We offer a weeklong summer institute where we deal with issues they’re going to be facing in the classroom. If people are having trouble, we go out and help them in their first year through a variety of strategies. Last year’s retention of first-year teachers was 92 percent.”

San Francisco’s Teacher Residency program supports new educators throughout their first two years on the job after they earn a master’s degree from the University of San Francisco or Stanford University at a reduced cost. The district also has one staff member on its recruitment team focused on outreach to potential African­-American teachers, said district spokeswoman Gentle Blythe.

“It is a priority to hire diverse, skilled teachers to serve our students,” Blythe said. “Our proactive recruitment strategies include hosting more of our own recruitment events, partnering more deeply with local universities, and issuing Early Offers of Employment to our top candidates, including candidates of color.”

Although the report did not analyze diversity in the Oakland district, it highlighted the Teach Tomorrow in Oakland program for its success in recruiting teachers who reflect students’ diversity. The program was created to fill district vacancies with teachers who would be likely to stay, especially targeting those who grew up in the area, said district spokesman Troy Flint.

“We do want to have a faculty that’s more reflective of the experiences that our students have and a person’s ethnic identity is often a big part of their personal experience,” he said. “But, we just don’t have enough teachers period. So, it’s really difficult to go one level deeper and focus on recruiting teachers of a specific ethnicity or background when you can’t get teachers of any kind.”