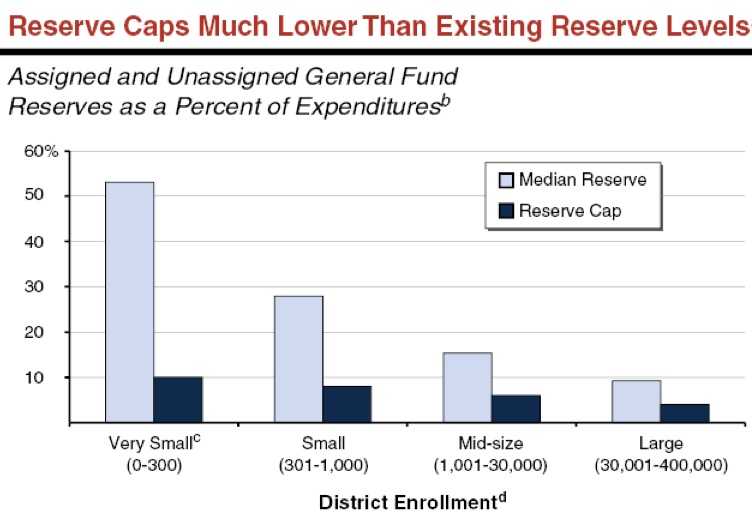 Source: Legislative Analyst's Office
The median reserves that districts built up in 2013-14 far exceeded what the cap on reserves would allow.

Source: Legislative Analyst's Office
The median reserves that districts built up in 2013-14 far exceeded what the cap on reserves would allow.

The California School Boards Association’s campaign to persuade the Legislature to reverse a cap on school district reserves got a boost this week when the Legislative Analyst’s Office issued a report issued endorsing a repeal.

“Less stability in academic programs, increased fiscal distress, and higher borrowing costs all are notable risks associated with lower levels of reserves,” wrote the LAO, a non-partisan, independent agency that advises the Legislature. It issued the report Wednesday.

Last June, at Gov. Jerry Brown’s urging, lawmakers passed a statute placing a ceiling of 3 to 10 percent on districts’ end-of-year reserves. That cap amounts to no more than twice the minimum reserves required by law, depending on a district’s size.

For a medium-size district with between 1,000 and 30,000 students, the ceiling would be 6 percent, less than a third of the median reserves those districts had put aside in 2013-14.

The cap would take effect only in years when the state puts any amount of money into an education rainy day fund that voters approved as part of Proposition 2 last November. The LAO projects that the first contribution to the rainy day fund is at least four years away and then, because of restrictions written into the law, it won’t be funded often.

But the LAO agrees with the school boards association that reserve levels imposed by the cap would not be prudent. Calling the cap contradictory to Brown’s commitment to local control, the association has made rescinding the statute its top legislative priority.

The LAO said districts build up annual reserves for a number of reasons: to even out revenue fluctuations, to guard against financial uncertainty and projected drops in enrollment, to protect against emergency repairs and lawsuit judgments and to save for expected expenses, like technology upgrades. Smaller districts, generally more financially vulnerable to adverse events, tend to have bigger reserves: In 2013-14, the median reserve of a district with less than 300 students was 66 percent. The median was 35 percent for districts with 300 to 1,000 students.

Reserves reached a historic high in 2010-11, as districts responded cautiously amid big state cuts in education funding and uncertainty over the passage of Proposition 30’s temporary tax increases. Reserves have begun to come down. Fewer than 10 percent of districts would meet the requirements of the cap, were it in effect last year, the LAO said.

The California Teachers Association urged Brown to support the cap, arguing that districts should be restoring programs instead of stockpiling taxpayer dollars. The LAO found that reserves in 44 mid-size districts had reserves exceeding 42 percent, twice the median.

But the LAO also said that reserve cap would be far below what credit agencies require for a top rating, therefore likely forcing many districts to pay higher interest rates on bonds and short-term borrowing. Other districts would face difficulty meeting emergency repairs and would have only a few weeks of payroll in reserve. Districts could ask their county offices of education for a yearly exemption from the restrictions.

The cap statute also requires districts to justify higher than permitted reserves at a yearly public hearing, starting in 2015-16. The LAO supports the public disclosure provision, which it says would force school boards to discuss the trade-offs of additional spending and saving.