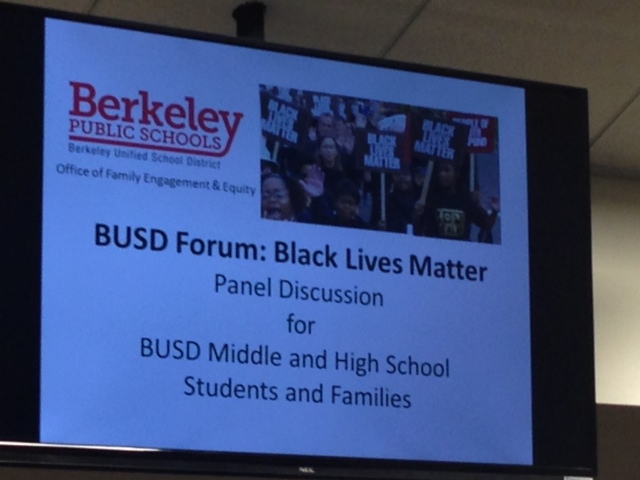 The profound challenges of coming to terms with the underlying issues of race raised by the police killings of Eric Garner and Michael Brown were on full display at a Berkeley Unified School District forum I attended just before the winter holidays.

The fact that a “Black Lives Matter” forum was necessary at all in a place known as one of the most progressive communities in the world was depressing. Yet it was also energizing that a frank conversation along those lines was being held in a place too often, and perhaps unfairly, known for its political correctness.

Check out a Berkeleyside video of the “Black Lives Matter” forum here.

It is not as if this is a community that has buried its head in the sand on racial issues. The city currently is implementing a multi-agency, multi-year initiative called “2020 Vision for Berkeley’s Children and Youth,” which began six years ago with the goal of “closing the achievement gap in Berkeley’s public schools by the year 2020.”

Last year ended very differently than how it began – with a joint meeting last January of the school board and city council to consider the 2020 Vision plan along with one on violence prevention. In December, the city became the epicenter of street protests in the San Francisco Bay Area for several days when protestors took over freeways and stormed downtown Berkeley in solidarity with fellow protestors in Ferguson, where Brown was shot.

Berkeley’s efforts to achieve equity in its schools began decades earlier, when many other communities elsewhere in the nation took an opposite path.

In 1968, Berkeley introduced a school integration plan that established school attendance boundaries for its elementary schools that ran from the flatlands abutting the San Francisco Bay to the more affluent Berkeley hills. To make the program work, the city established the first voluntary busing program in the nation.

During the last decade, the school district fended off a legal challenge to its integration plan that was upheld as constitutional by the California Supreme Court.

Today the approximately 10,000-student district is one of the few racially balanced districts in the San Francisco Bay Area, with no one racial or ethnic group in the majority. Thirty-five percent of its students are white, 24 percent are Latino, 20 percent are black, 7 percent are Asian and 12 percent put themselves in the “two or more races” category.

The schools are far more diverse than the city itself, with a population that is 55 percent white, 19 percent Asian, 11 percent Latino and 10 percent African-American, according to the 2013 census.  That suggests that at least some black and Latino parents from neighboring school districts seek out the Berkeley schools.

These are generally excellent schools that my own children attend. Having attended all-white schools segregated by law in my native South Africa, the diversity of the Berkeley schools is one reason I am proud to send my children there.

Yet the sentiments that poured out during the forum – moderated by Superintendent Don Evans, who is African-American – underscore how far Berkeley still has to go to achieve equity in its schools and in the larger community.

“It is easier to respond to the macro-manifestations of racism and oppression, but responding to the daily micro-aggressions that black people face in the city of Berkeley, in our school districts and our schools requires a lot more courage,” said Pastor Michael McBride, the founder of The Way Christian Center, just blocks from the school board meeting room where the forum was held.

McBride has spent a good deal of time in recent months in Ferguson working with youth there as part of his duties heading the Lifelines to Healing Campaign of PICO, a national network of faith-based community organizations.

Sheila Quintana, the principal of the Berkeley Technology Academy, the district’s continuation school that serves about 100 students, a majority of whom are African-American, described what she called the “resegregation” of the Berkeley schools.

“You have classrooms that are all one race, and not another,” she said.  “How can that be in a system where you spend more money than most districts because you want a quality education for all students?”

Jamaica Moon, who was born and raised in Berkeley, is herself a graduate of Berkeley High and is a leader of the Black Parents Affinity group, now has three children in the Berkeley schools, all under the age of 8. “They have never known a white president (of the United States),” she said, to applause from the 200 people who showed up for the forum. “All they know is a black president.”

Yet when speaking to her 7-year-old son, she says, “I want to make sure he knows how to respond when he is pulled over by the police.”

Kadijah Means, the president of Berkeley High’s Black Student Union, helped organize a peaceful walkout of some of her fellow students the previous week in support of the Ferguson protesters.

“I feel unequal, and I am,” she said. “In the Berkeley bubble, people feel there is no racism, and that is ridiculous. I don’t know if it will end in my lifetime. My little brother asks me ‘why why why’? I can talk about ‘why this is’ a lot, but what is going to be more effective in the long run is how we are going to fix it.”

Berkeley voters have for years demonstrated their support for their schools, including many who have no school-age children. In 2006 80 percent approved a parcel tax that generates nearly $30 million for its schools each year – an average of nearly $3,500 per student. The extra funds have allowed the school district to survive the budget cuts of recent years better than most districts in the state, and to offer a range of services to students from all racial and ethnic groups.

But the racial and ethnic gap in academic outcomes remains vast. In 2013, African-American students in the district had an average Academic Performance Index score of 674, compared to a score of 923 for whites – a 249 point difference. Latino students had an API score of 764, and Asian-American students 834. Until last year, the API was the main way the state measured school and student performance

Also in 2013, only half of African-American and Latino students scored at a proficient level on the California Standards Tests in 3rd grade reading, compared to 90 percent of whites. Nearly three times as many African-Americans and twice as many Latinos were “chronically absent” from school – meaning they missed at least 10 percent of the school year – compared to white students.

The schools and the community still grapple with racial inequities that Berkeley has striven to overcome for many decades.

“I see Trayvon Martin, I see Michael Brown, I see Eric Garner on my campus every day,” said principal Quintana of the students at her school who are at risk of dying through gun violence.

She recalled a recent graduate who was shot to death in neighboring Oakland last year. At the student’s June graduation “I shook her hands and gave her a hug, and in July she was murdered while waiting for her boyfriend,” she said.

“What do you say to teenagers who are looking at you as the authority, about these questions about their existence? What do you tell them?” Quintana asked.

“You tell them the truth,” she said. She stepped beyond the pessimism that pervaded the evening event and pointed to some recent improvements in African-American education outcomes in the district, including higher graduation rates.