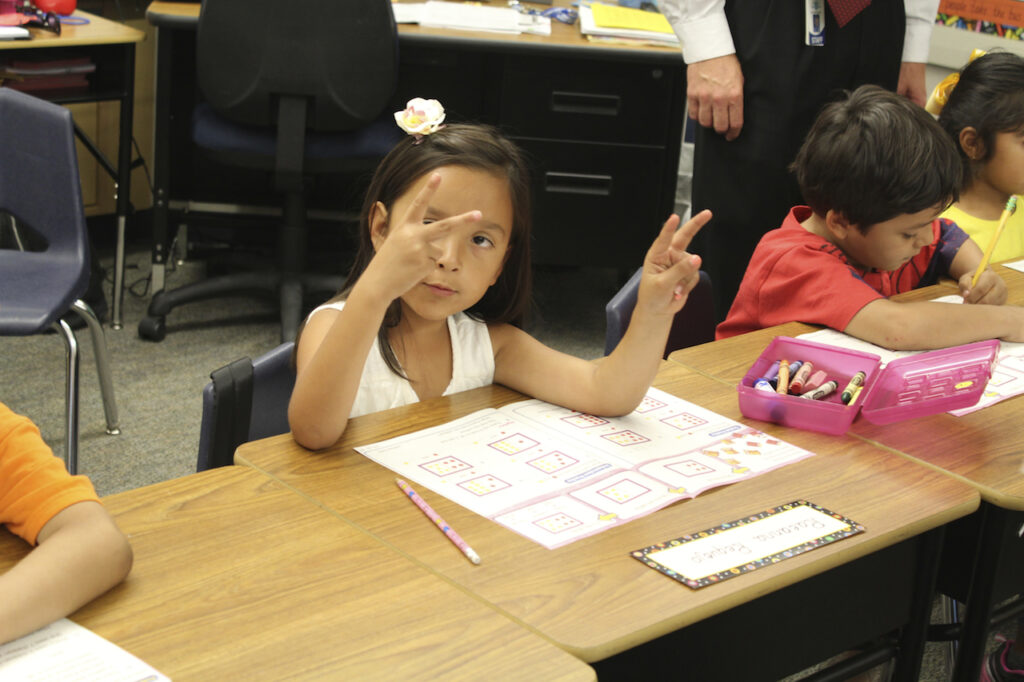 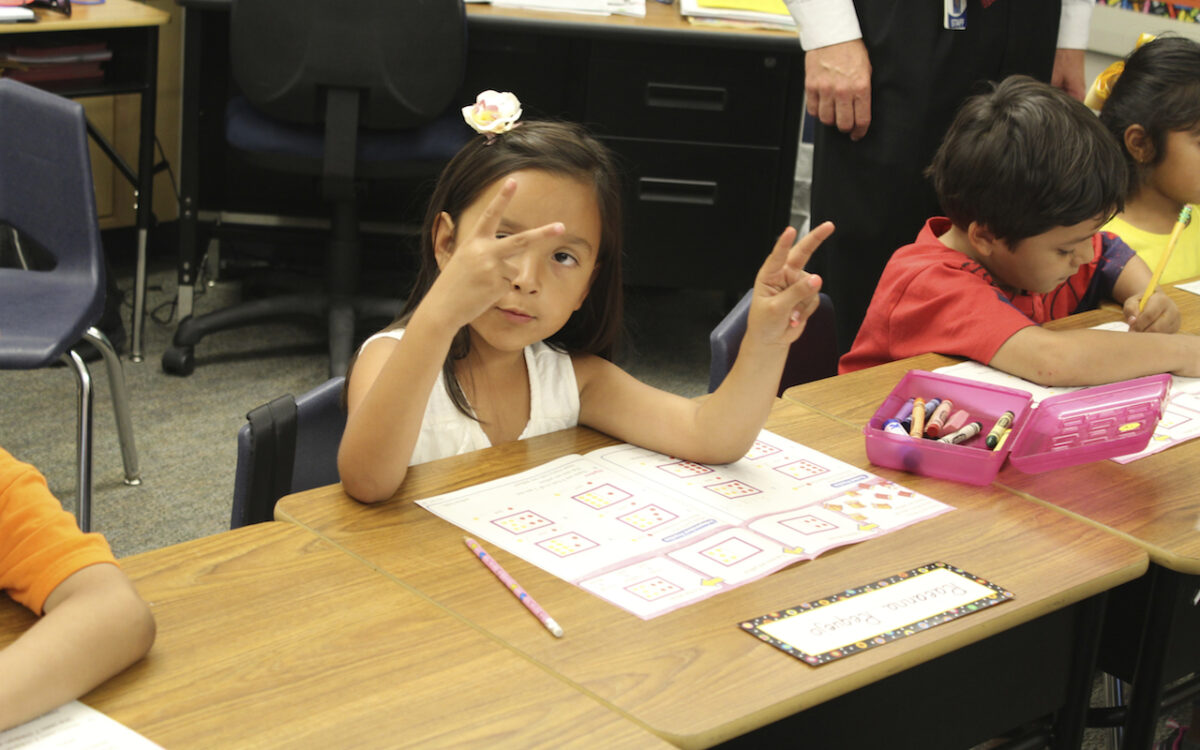 As parents across the state open the envelopes containing their children’s scores on the new Smarter Balanced assessments administered last spring, only a third of them will see that their children met or exceeded the math standard on the new Common Core-aligned tests.

In fact, only one-third of California students in grades 3-8 and grade 11 met the math standard – compared to 44 percent of students who met the standard in English language arts. That is also significantly lower than the percentage who scored at a proficient level in math on the old California Standards tests.

Although math is a stumbling block for many, mastering it is essential for students if they wish to advance in both college and the workplace. Students are required to pass Algebra I to graduate from high school, and pass Algebra II in order to enroll at most four-year universities, including UC and CSU.

Once in college, students are generally required to complete an advanced math course beyond Algebra II to earn a four-year degree. In addition, a deeper understanding of math is required for many other courses both in high school and college, such as physics, chemistry, engineering and computer programming. But rather than react with alarm, educators are urging both students and parents to not become discouraged by the initial Smarter Balanced math results, a key part of what the state calls the California Assessment of Student Progress and Performance, or CAASPP.  “If students have been doing well in math and now get poor results, you don’t want parents to think kids are bad in math or kids to get discouraged,” said Phil Daro, who was one of the principal writers to draw up the Common Core math standards. “That is the single biggest danger in the shift (to Common Core), especially in math where it is easy to ruin a kid’s disposition to math.”

“We knew that with new standards and new tests, results would be challenging for schools,” said Jose Dorado, coordinator for elementary mathematics for Los Angeles Unified. “We’re raising the bar significantly. When you change the way you test kids, you might not immediately get the results you want.”

Educators overseeing math instruction point to a range of challenges they face in order to improve math results. These include concerns that computer-based testing doesn’t provide the best platform for students to apply their knowledge in math, inconsistent implementation of the Common Core math standards from one district to another, and lack of training and support for math teachers who are implementing the new standards for the first time.

Vicki Vierra, president of the California Mathematics Council, a professional network of more than 6,000 math teachers from districts across the state, said she doesn’t necessarily see the test results as troubling, but rather a result of raising expectations for children. “It’s important to remember that the math has not changed,” she said. “What has changed is that we now have this new process for students to think and explain how they’re learning. These new tests are part of this transition. It’s going to take some time.”

Officials overseeing math instruction in some of the state’s largest districts said they are themselves trying to interpret the test results.“There is some disappointment because you look at how hard the kids worked and how hard we all worked, and the results aren’t good enough,” said Phil Tucher, mathematics manager at Oakland Unified, where 23 percent of students met or exceeded the math standard. “But we have nothing to compare them to. We looked at each of our schools when these results came out, and our initial thoughts were, ‘What do these scores mean?’”

He and others in his district are still trying to understand how some campuses that earned among the district’s highest math scores on the old California Standards Tests earned among the lowest scores in the district on the Smarter Balanced tests. For example, only 13 percent of students at Parker Elementary met or exceeded the math standard on the Smarter Balanced tests, while  77 percent of students at Parker tested proficient or advanced in math on the California Standards Tests in 2013.

“It’s important to remember that the math has not changed. What has changed is that we now have this new process for students to think and explain how they’re learning,” said Vicki Vierra, president of the California Mathematics Council.

State Superintendent Tom Torlakson said that the new scores should serve as a “starting point.” He and others say they expect students’ scores to improve over time, as they did under the old California Standards Tests administered for the last time in the spring of 2013. In 2002, the first year the CSTs were administered, 30 percent of 8th graders scored at a proficient or advanced level – approximately the proportion who were deemed to have “met or exceeded” the standards on the current test. Ten years later, 52 percent of 8th-grade students were scoring at proficient level.

In Los Angeles Unified, where 25 percent of all students met or exceeded the standards, officials are trying to understand what the results mean for actual classroom instruction. “With the Smarter Balanced tests, there are a lot of moving parts,” Dorado, the district’s elementary math coordinator, said. “It’s very complex.”

For example, students’ math scores are broken down into three categories: “problem solving and modeling/data analysis,” “concepts and procedures” and “communicating reasoning.” The district’s initial analysis shows students had significant success on the “communicating reasoning” section of the test, which measures how well students provided evidence or constructed viable arguments to explain how they solved math problems. About 61 percent of Los Angeles students met or nearly met achievement targets in “communicating reasoning,” including 57 percent of the district’s low-income students. That is 6 percentage points higher than the statewide average for low-income students.

Dorado credits a learning module called Math Practice 3, which all district elementary schools have used for three full years, for helping teach students how to better explain their thinking in solving math problems. He said that Math Practice 3 has been successful in teaching students to not just to come up with the right answers, but also to justify them.

It’s also important for parents to remember, Dorado said, that Smarter Balanced math scores alone don’t indicate how well students are learning math aligned with the Common Core. He noted that three-quarters of Los Angeles Unified students are not failing their math classes. “As we move forward, we need to think about what other measures we are using (to gauge success in math),” he said. “Grades, teacher reports and classroom work tell us more about this student than a single score in this one test.” 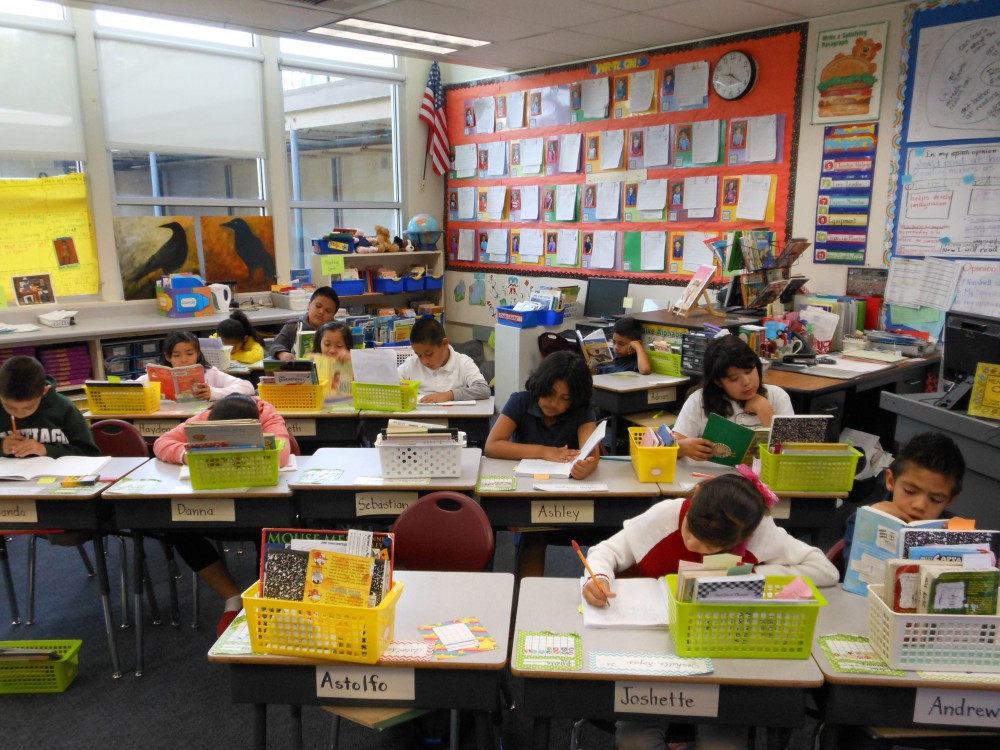 Classroom math not aligned to tests

Like Los Angeles, districts across California are still working toward fully aligning classroom instruction with the Common Core, which Dorado said means a large portion of students were tested on a curriculum they haven’t been completely immersed in. “Los Angeles started implementing Common Core three years ago,” Dorado said. “It takes time and a tremendous amount of work. In LAUSD, we’re talking 500 elementary schools alone.”

Another challenge has been the shortage and quality of curriculum materials aligned with the standards. “Many teachers are in the implementation phase,” said the California Mathematics Council’s Vierra. “Many districts are still getting around to buying the curriculum (materials they need).”

“A lot of teachers are cobbling together old materials with lessons they find online and material the district is providing,” she said. “Much of the math curriculum is still very fragmented.”

Oakland’s Tucher said it’s going to take several years before the curriculum students are learning in the classroom is fully aligned with what the Smarter Balanced tests are measuring. He took issue with the idea that California has been implementing the Common Core for three years, following the curriculum’s official adoption in 2010. “This whole notion that in California we have been doing the Common Core for three years … are you kidding?” he said. “Three years ago we were preparing students for completely different exams.”

Tucher said that even if teachers now have materials that are fully aligned with the Common Core, and even if they’ve received adequate training, they’re still working with students who’ve had significant gaps in Common Core instruction in previous years.

“It’s a process,” he said. “These initial SBAC scores reflect an early milestone to accelerate us on our way.”

Daro believes there’s still a great disconnect between what the Smarter Balanced tests measure and what students are currently learning in the classroom – and that math instruction varies significantly from district to district. “We have a ways to go in terms of instructional materials, teachers’ knowledge of math – these things change slowly,” said Daro.  “I have not seen sweeping changes in the classroom.”

Jim Ryan, San Francisco Unified’s executive director for science, technology, engineering and math, or STEM, said math instruction in San Francisco classrooms is unrecognizable compared to how students learned just three years ago. Then students sat at their desks in rows solving problems on their own. The faster they completed a problem, the more they were regarded has having mastered the topic. Ryan described this approach as “naked math” because it represented a very stripped-down learning model that involved minimal interaction and collaboration among students.

Now, students work in pairs or groups, arguing about what the right approach is to a problem, Ryan said. They have to explain their reasoning and justify it to one another. “It’s a much noisier classroom,” he said.

Some educators and experts also question whether having students take the Smarter Balanced test online is the best way for them to test students. “Mathematicians do their best work on the back of envelopes, or on some scratch paper,” said LA Unified’s Dorado. “When you ask youngsters to graph up some data or run some calculations, we have to be careful and allow the testing environment to incentivize students to do the right things.”

Currently, some portions of the Smarter Balanced tests allow for students to use scratch paper. But only the work done online is counted toward a student’s final score. Some educators said they anticipate the tests will eventually include technology that allows freehand drawing on computer screens to provide students with more ways to work out problems.

Another issue with computer-based testing is that the degree of computer literacy, or even everyday access to technology, can vary widely among students. In many urban districts with high rates of low-income students, including Los Angeles and Oakland, many students only have access to computers at school. Many schools still don’t have enough computers, reliable WiFi networks or other technology in place to provide students regular digital access during daily math lessons.

Just learning to drag and drop graph points on the screen or scrolling through drop-down boxes could prove challenging for test-takers with limited computer experience, Dorado said. “We need more of our youngsters to be on the computer (during the year), so when the test comes along, it’s not so strange and foreign,” he said.

Los Angeles is continuing to upgrade technology in the classroom, but high costs are hampering those efforts, he said.