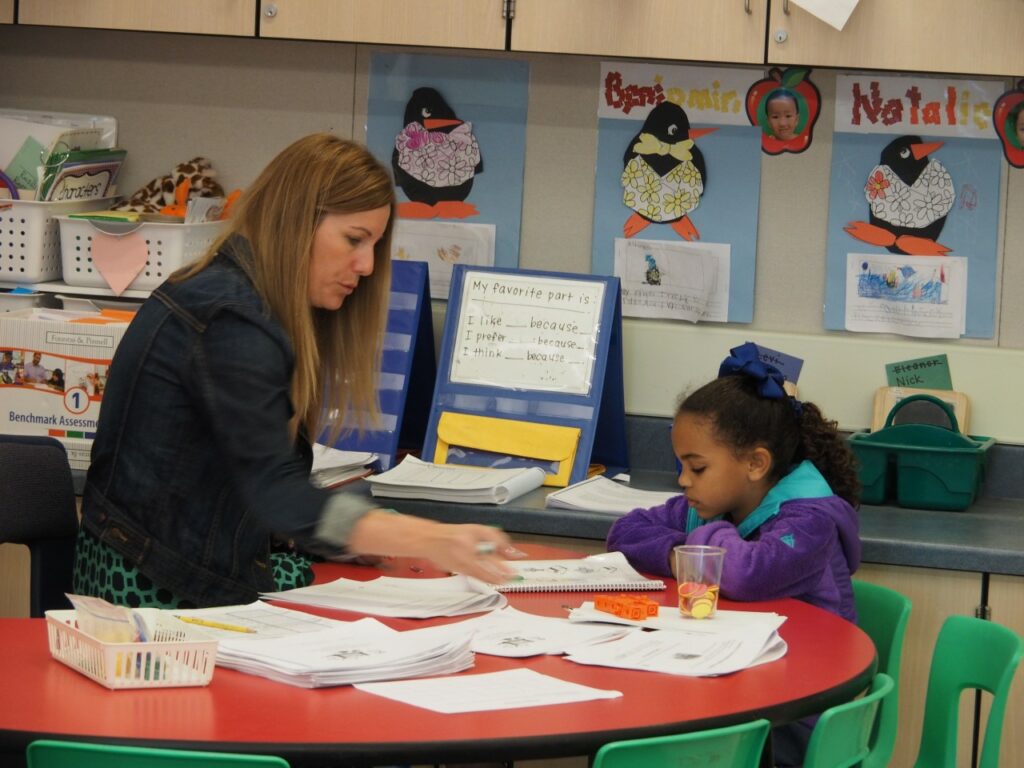 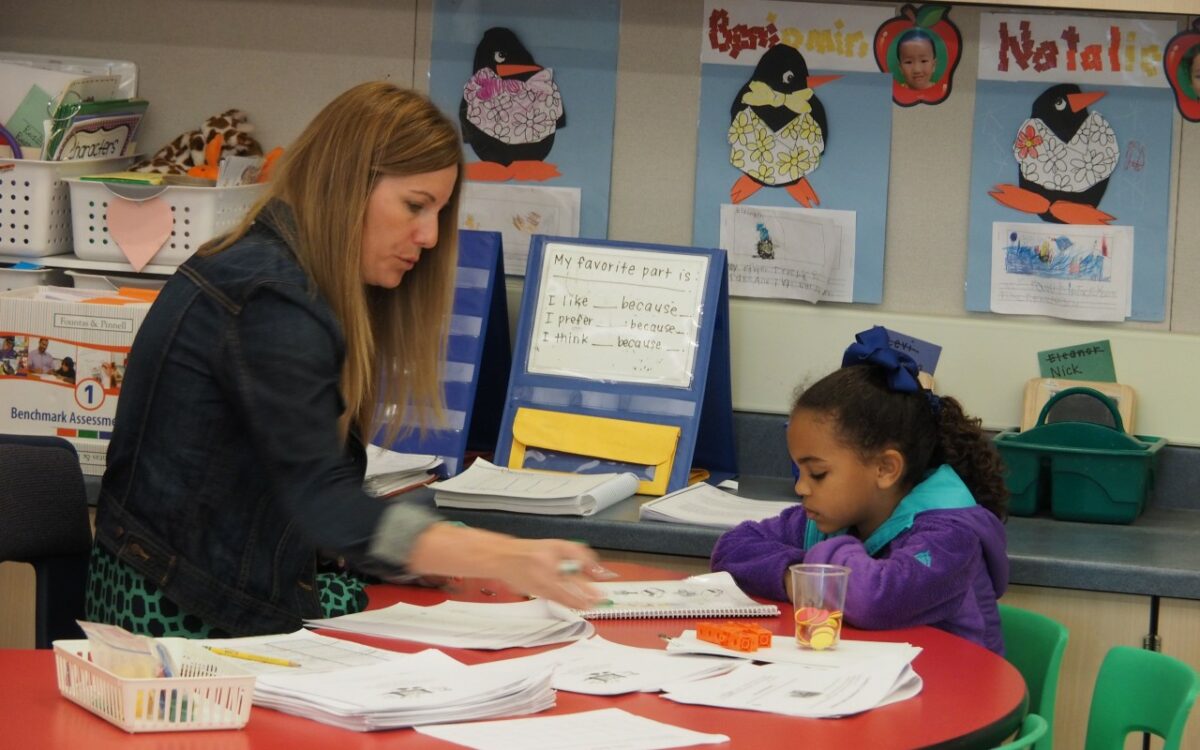 As millions of California students prepare to take new online assessments beginning in the 3rd grade, districts are grappling with how best to measure academic progress in the earliest grades – starting in kindergarten.

For the past 15 years, students in 2nd through 11th grade were assessed on California’s STAR tests, a battery of mostly multiple-choice questions in English language arts and math. The state testing program was discontinued in 2013 to make way for the new Smarter Balanced assessments that will be administered this spring for the first time.

Only students in 3rd through 8th grade and 11th grade are taking the new Common Core-aligned assessments this year, which means school districts must figure out how to measure students’ progress in the 2nd grade – while continuing to assess how they are doing in kindergarten and 1st grade. Educators say it is important to track student progress in the earliest grades to ensure that students are up to speed academically by the time they reach the 3rd grade.  They point to research that shows that if they are not, they may never catch up with their higher-performing peers, or even fall further behind.

But without the benefit of established assessments for K-2 students that are fully aligned with the Common Core State Standards – the new academic standards in English language arts and math adopted by California and 42 other states – school districts are using off-the-shelf assessments such as the Fountas & Pinnell reading assessment, creating their own tests or using a combination of each.

“We have a good system for tracking our kids this year,” said Dave Calhoun, the Fresno Unified School District’s executive director of research and assessment. “I think it’s pretty solid.”

For example, K-2 students in the Long Beach Unified School District will take a math test at the end of this school year that teachers and district testing experts developed. Twenty-three of the 30 questions on the exam will be based in some way on Common Core math standards, said Anne Oberjuerge, the district’s K-5 math coordinator.

In those districts, students in the early primary grades are being assessed regularly, with tests as often as every few weeks on units in math and English. In addition, teachers often administer very short assessments in one-on-one sessions with students that last five minutes or less.

Several districts also use an assessment known as the Desired Results and Developmental Profile, which sizes up a preschool student’s readiness for kindergarten based on a teacher’s observations of the student’s self-control, social and emotional development, literacy skills and math and science cognition. The assessment, developed by WestEd, a nonprofit research and consulting organization based in San Francisco, also is given to some transitional kindergarten students in California. The test is not required by the state.

Testing strategies this year for K-2 students at Fresno Unified, the state’s fourth-largest school district, appear to be working so far, said Dave Calhoun, the district’s executive director of research and assessment.

Fresno is tracking students’ progress in kindergarten this year with four separate assessments throughout the school year in English and math. In addition, the district is using the Degrees of Reading Power assessment system to measure and track reading comprehension of all students from 2nd to 12th grades.

The district is also using the very short assessments given by a teacher to one student. For example, a teacher may test a student’s grasp of letter names and letter sounds, or their ability to count to 100. Students in 1st and 2nd grade are given five-minute tests on math facts, such as addition and subtraction.

“We have a good system for tracking our kids this year,” Calhoun said. “I think it’s pretty solid.” Still, tracking Fresno Unified’s nearly 19,000 students in kindergarten, 1st and 2nd grades is a tall order in a district with 72,000 students – 25 percent of whom are English learners.

While the Fresno, Long Beach and San Francisco districts say their testing in early grades is largely in step with Common Core standards, some experts aren’t convinced.

Deborah Stipek, dean of Stanford University’s Graduate School of Education, questions whether some assessments given to K-2 students are falling short of the promise of the new standards by not focusing enough on critical thinking and problem-solving.

For example, Stipek said, Common Core math standards ask students to explain how a concept works and their reasoning. “That’s not in many programs I’ve seen that are stamped ‘Common Core,’” she said. “Just because it says so, doesn’t mean it is.”

California teachers have received too little professional development in how to test and teach to the new standards, Stipek said. “Teachers are being asked to teach in a way quite different from their training, and are being asked to meet standards that are more rigorous and better for learning.”

In Long Beach, teachers have spent considerable time on professional development in recent months to help them create testing programs in-house this year, said Oberjuerge, the district’s K-5 math curriculum leader. Accomplished teachers have signed up to become “coaches.” They write tests that are given to K-5 students at the end of a specific unit of work, such as addition and subtraction for 2nd-graders.

In addition, math teachers in the district work closely with the English language learners coach to help them teach the complicated academic language of math to make it more accessible to English learner students in math assessments.

The district communicates to parents throughout the year on how well their students are doing, but the forms the parents are reading aren’t like the report cards that used to come home.

In the San Francisco Unified School District, teachers are giving the Fountas & Pinnell reading benchmark assessment to K-2 students three times this year, said Shannon Fierro, the district’s supervisor for formative assessments. The district is helping refine how teachers will teach the new standards and what resources they need to be prepared.

All students in grades K-12 in the district receive report cards, Fierro said, and in grades K-5 the report cards have been revised to reflect the content of the Common Core standards. Many teachers share individual reports of student performance on district-level assessments with parents during parent-teacher conferences, or send the reports home.

In addition, teachers are sharing data with each other about their students’ progress in reading and math, Fierro said. Elementary school students’ reading levels have increased and should continue to improve the closer students get to reaching 3rd grade, she added. Students who are not reading at grade level are getting help.

Next year, Fierro said, the district aims to immerse K-2 students in the new standards in a project that would encourage them to share their opinions in writing. After that, there are plans for a similar project focused on argumentative writing, where students would make well-reasoned arguments on a topic.

At Long Beach Unified, K-2 students and their teachers are working diligently to be prepared for 3rd grade, said Oberjuerge, the district’s elementary math coordinator.

“We all need to be learning each day,” she said. “There have been big shifts in the past two years in the way classrooms function. Now it’s all about solving problems and explaining the ‘why.'”