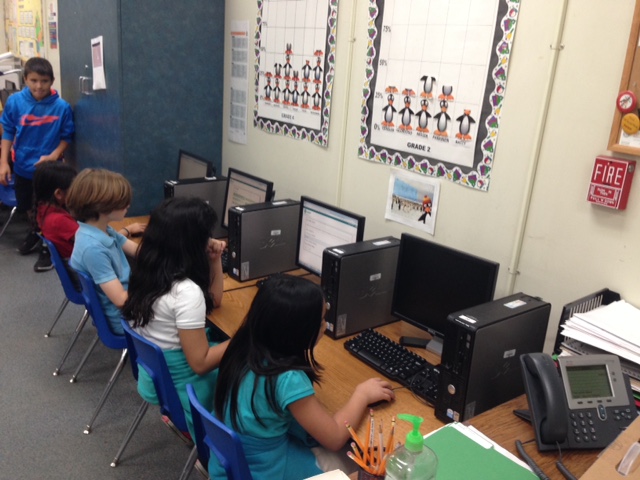 Precisely when students will take the tests will vary from district to district and from school to school, according to each district’s instructional calendar. Districts typically provide schools with windows of time in which the tests may be given, and then allow schools to set the exact dates for them.

The computer-based tests will replace the multiple-choice, pencil-and-paper California Standards Tests (CSTs) that students have been taking since 1998. They will be taken by students in grades 3 through 8 and grade 11 and will be administered between now and the end of the school year.

The variation in start and end dates for the test administration is evident in six districts and Aspire Public Schools, a leading charter management organization with 35 schools in California, all of which are being followed by EdSource as they implement the Common Core standards.

Developed by the Smarter Balanced Assessment Consortium, of which California is a governing member, the new tests cover English language arts and math.

The consortium estimates that the tests will take students between seven and eight-and-a-half hours to complete, but it is up to the schools to decide precisely how to schedule them. Pam Slater, a spokeswoman for the California Department of Education, said the most likely scenario is that students will take the tests over several days, in blocks of time as short as 30 minutes to an hour.

The tests are being administered as part of the new California Assessment of Student Performance and Progress (CAASPP), replacing the California Standardized Testing and Reporting (STAR) program.

There is no central database that indicates when a district or an individual school will administer the assessments. Some districts have posted testing dates on their websites, but if parents and students want to know the exact dates they will need to contact their schools directly. Some districts have already begun administering the tests.

Setting the dates for the tests is likely to be the least of a district’s challenges in transitioning to the new Smarter Balanced assessments.

Each district will also be grappling with administering the tests by laptop and computer, and explaining changes that include requiring students to provide written answers to questions, rather than filling in a bubble on a multiple-choice question, as they did with the California Standards Tests that students took for the last time in the spring of 2013.

Based on their experience with the field tests administered last year, most of the superintendents in the districts being followed by EdSource this month expressed confidence that students and teachers wouldn’t have to cope with computer glitches during the tests.

Gabriela Mafi, superintendent of the Garden Grove Unified School District, said that she and other district officials initially worried that their schools’ computer systems wouldn’t be up to the challenge of administering the new online tests. Yet she said the absence of major problems during field tests last year reassured her, adding, “It went better than we had hoped.”

Two of the superintendents interviewed by EdSource noted some relatively minor concerns about whether their schools were technologically prepared to administer the new tests.

Santa Ana Unified superintendent Rick Miller said there were technical problems during the field tests at some schools, such as computers freezing and screens going blank. “I think there are going to be some surprises as we go forward with the technology part,” he said.

“We’ve learned a lot from that, and I think we’ve done a lot to improve all of our connectivity throughout our district,” Wheaton said, although he added that some schools’ wireless networks may still be too slow for the demands of the tests.

As a result, he said, schools may have to make some last-minute adjustments, such as moving students into computer labs rather than depending on the wireless networks for laptops. “As we go through the testing season this spring, we’re going to have new information on how prepared we really are,” Wheaton said.

The following are the testing windows for the six school districts and the Aspire Public Schools organization EdSource is following. The actual dates students will take the tests will vary depending on the schools they attend.

More questions? Check out these FAQs prepared by the California Department of Education.