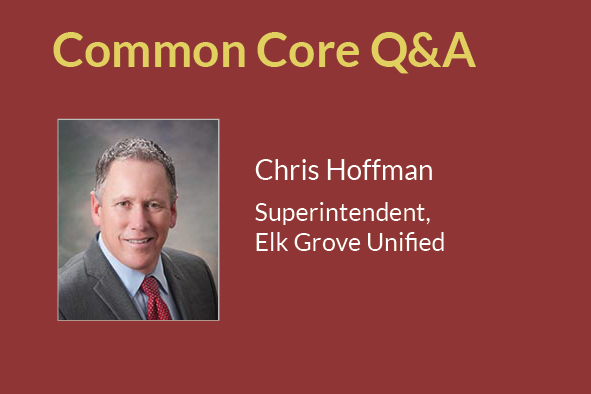 Chris Hoffman, superintendent of the Elk Grove Unified School District, is the first superintendent of the district to have received his K-12 education there. He talked with EdSource recently about preparing teachers and students for the Common Core standards in his district. Here are excerpts from the interview:

We’ve seen a lot of reforms come and go over the years. How are you dealing with the Common Core? Do you see this as a major reform?

What has been the most encouraging aspect of Common Core implementation in your district?

I’m encouraged by the deeper level of critical thinking and the skill set that we’re asking kids to master. What’s also very exciting is the concept that the adults are learning at the same time. This is an opportunity for all our staff to rethink how they’re going to deliver curriculum and how they’re going to engage kids to become a central part of the learning versus just being one-directional information coming from the teacher.

What has been the most challenging part of implementation so far?

The most challenging parts have been time and the availability of the materials. This has come at us at a pretty quick pace and during the worst recession in U.S. history.

Some people are saying Common Core isn’t that different than previous standards. How new is the Common Core?

It’s a pretty big change. One piece is the commonality of what the kids are expected to know, and to be able to do, from kindergarten all the way through 12th grade. The continuity among this set of standards is significantly better developed and organized than it was previously.

Are you finding textbook materials that are aligned with Common Core?

We have K-8 Common Core math materials in front of kids. We are using Go Math for those grades and our school board has approved moving forward with an integrated math program in high school. We’re moving away from the traditional algebra, geometry and algebra II. Next year we’ll be rolling out Integrated Math I, the math approach of Houghton Mifflin for grades 9-12. Forty-eight teachers were involved in the pilot for the high school math materials.

Are your students prepared for the Smarter Balanced tests?

Our kids generally do well on a wide variety of metrics, and I don’t see the Common Core testing being dramatically different. I expect the use of technology will be part of the challenge for teachers and students and they’ll have to get used to how that works.

Are you seeing a lot more project-based learning as a result of Common Core?

I don’t know if we’re seeing a huge increase. We did a lot of that already. We have an extensive array of career academies throughout our district so the concept of integrated curriculum and outcome-based education isn’t new.

How prepared are your teachers to teach Common Core or to use the standards in their instruction?

I think we’re in pretty good shape, relative to the amount of work that’s put in front of us. This is a process, and this is going to take another 3 to 5 years to be in a form where we are fully implementing Common Core in every classroom, and where every teacher is an expert in that content. But we still have a lot of work to do in adopting curriculum.

Is Common Core overshadowing other major reforms, such as the Local Control Funding Formula?

Both of those things are going on simultaneously. It’s a challenge but it’s part of what motivates me in getting up every morning. This is one of the few opportunities I’m going to get to be at the ground level of restructuring the financial side and how we use resources, via the Local Control Funding Formula, as well as what we’re doing with curricula. It would be pretty exciting if you were able to do one of those two things in your career. But we’re going to do both at the same time.