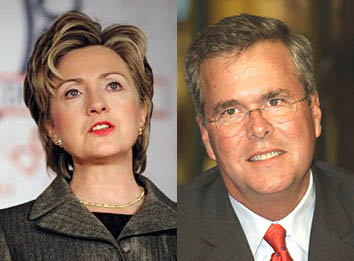 With the growing certainty that Jeb Bush will be a candidate in the 2016 presidential campaign, his support for the Common Core State Standards guarantees that the standards being implemented in 43 states will be drawn into the whirlpool of presidential politics.

It is uncertain, however, what impact that will have on the future of the standards, one of the most significant education reforms in decades. What is at stake is whether the Common Core becomes the transformative national reform its proponents are hoping it will be – or whether it becomes a polarizing issue on the education landscape with diminishing public support.

One gloomy scenario envisions the Common Core lurching toward a possible terminal fate, at least in states where there is rising opposition. UC Berkeley public policy professor David Kirp, a longtime education scholar, wrote in a recent New York Times op-ed piece titled “Rage against the Common Core” that “in states where the opposition is passionate and powerful, it will take a herculean effort to get the standards back on track.”

Another scenario, however, is that despite rising opposition in some states the Common Core will end up being implemented in most parts of the country – perhaps not in exactly the same form everywhere, but nonetheless marking a dramatic shift from the patchwork of education standards in place for most of this nation’s history.

That is the view of Marshall Smith, former undersecretary of education during the Clinton administration and counselor to current Secretary of Education Arne Duncan. He predicted that at least 35 states “will either be clear Common Core or have a modification that is at most a first cousin or a brother of the standards.”

The Common Core does not appear to be in any danger in California, home to 1 in 8 of all public schoolchildren in the United States. Conditions for implementation of the standards in the state remain favorable, as noted in an earlier EdSource Today report. Gov. Jerry Brown and the Legislature are still supportive. Significantly, the teachers unions are as well. Chances are the state will be able to weather the storms of presidential politics on the issue.

“I haven’t seen strong resistance that has caused us to shift course, or withdraw from the Common Core,” said Michael Kirst, president of the California State Board of Education and Stanford professor emeritus, who has been a longtime scholar of the politics of education in California and nationally.

Even in states that have withdrawn from the Common Core, or are threatening to do so, most are introducing some version of the standards in their place.

“There are very few states which are going back to their old standards,” Kirst said. “All but a handful are going forward with some form of new standard closely aligned with the Common Core.”

According to a report by the Education Commission of the States last fall, in the 45 states that adopted the standards since 2010, 43 “continue with the Common Core standards in place.” The report, however, noted that “that number could decline” as at least five states are considering repealing the standards, but that “the vast majority of states adopting the Common Core continue to support the effort.”

In fact, said Kirst, “the standards are holding up better than I thought.”

He pointed out that some states have renamed their standards but they are are still essentially Common Core standards. Florida’s Next Generation Sunshine Standards is one example. Removing the Common Core name may actually reduce the intensity of the opposition to the standards, Kirst said.

So far, opposition to the Common Core has had the most significant fallout not on the standards themselves, but on the assessments that students will to take to measure how well they and the schools they attend are doing.

That vision has been significantly eroded, as a recent review by the Education Commission of the States titled “50 Ways to Test” found. After Mississippi withdrew from the PARCC assessments last month, only 11 states and Washington, D.C., are expected to administer the PARCC assessments in the spring. That’s a steep drop from the 28 states that joined the consortium in 2010.

Students in 18 states, including California, will take the Smarter Balanced assessments. Some 20 states either never joined or have left the consortia altogether, and will administer other assessments, including some states that are developing their own.

“The idea that we would have 45 states take two assessments, and both highly similar, that is probably not going to happen given the nature of federalism and the diversity of state political cultures,” Kirst said.

Having a less uniform implementation of the standards may actually be more consistent with the original conception of the Common Core – a voluntary set of education standards that would be driven by states rather than a uniform set of top-down standards imposed by the federal government.

At this early stage of the campaign, it is clear that Bush’s support for the standards won’t mute opposition to them within his party.

Huckabee is the latest in a string of current and former governors who once supported and now oppose the Common Core. Huckabee said the Common Core “has morphed into a frankenstandard that nobody, including me, can support.”

But were Bush to emerge as the nominee of his party, former undersecretary Smith said he doubted that the GOP grassroots would make his support for the Common Core a major issue in the general election.

“It may be a wedge issue in some states,” Smith said. “But Jeb totally confuses the issue for Republicans (because of his support for the Common Core). They can’t afford to embarrass him to force him to back down from this.”

If Hillary Clinton becomes the Democratic nominee, that would further help ensure that the Common Core would not become a major issue in the campaign. Clinton has been largely silent on the Common Core, unlike her husband, who has endorsed the standards.

So far, at least, she has made early education her major education priority. She has become a leader in a campaign launched around the slogan, “Too Small to Fail,” which focuses on the 0-5 years, and places a major priority on access to high-quality preschool.

The greatest threat to the Common Core may not be at the national level, but at the school and district level, where teachers may struggle to implement the standards, parents try to understand them and students adapt to a whole new set of tests and assessments.

Opposition could be stirred when the results of the first full administration of the Smarter Balanced and PARCC assessments to be taken by all 3rd- through 8th-graders and 11th-graders are released. As was the case in New York, those scores are widely expected to be lower than those students earned on previous tests.

“The biggest political backlash won’t be from political folks arguing among themselves, but from parents and teachers when they find out that implementation of the standards is very challenging,” Smith said.