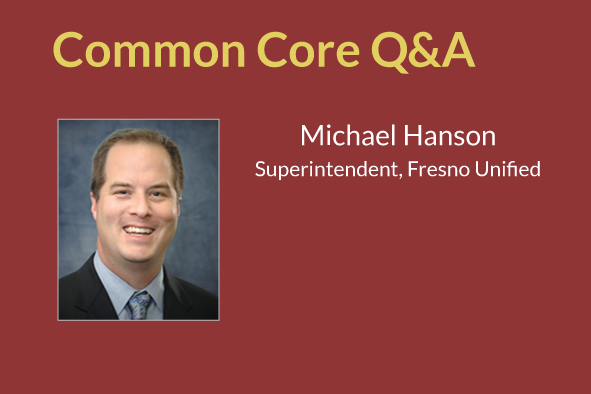 EdSource is conducting a series of interviews featuring educators’ experiences with the Common Core State Standards. Fresno Unified is one of six districts that EdSource is following during implementation of the new standards. For more information about the Common Core, check out our guide.

Fresno Unified School District Superintendent Michael Hanson has served as superintendent for the district since 2005. Prior to that he served for four years as associate superintendent of educational services for the Elk Grove Unified School District, and four years as principal of Laguna Creek High School. He holds a bachelor’s degree in economics from UCLA, a master’s degree in education from Harvard University, with a specialization in teaching and curriculum and a certificate of advanced study in Educational Administration from Syracuse University.

Is Common Core a significant departure from what was expected of teachers before?

It is a significant departure in terms of the instructional shifts, there’s no doubt. And I also think it does call for a deeper level of understanding of core content. And that’s a place that we’re going to probably have to grapple with as a state. I think that what is required in California for an undergraduate degree leading to a credential, especially in the elementary division, is not complete enough to have you prepared to teach to the Common Core from  just a purely content level. For example, what is required now in 5th and 6th grade in mathematics are some pretty high-level, complex algebraic concepts. And you can’t teach that with just a couple of college math courses and then a methods course on the way to certification.

The district put in our contract that we signed last year that we were not going to have combination classes in grades 5 and 6. And that was a nod from us, saying we know the conditions are going to be difficult for 5th and 6th grade teachers trying to teach math, and the last thing we’re going to do is give any teacher a 5-6 combo to teach two years worth of very difficult content. So I do think it’s going to challenge people, and I think it’s going to require different pedagogy, but it’s also going to require some study on content as well.

What is most encouraging about implementing the Common Core thus far and what’s the most challenging?

The most encouraging is we’ve got a clear, consistent understanding of what students are expected to learn, and we’ve done a pretty good communication with our teachers and parents about what they need to do to help them. What’s a challenge is actually another benefit. At the same time that we’ve been implementing, we have moved our district pretty aggressively to having what we call accountable communities. It’s our version of professional learning communities. And we built that in in every school, every grade level, every department over a three-year period. So now we’re in year four, we have 700 lead teachers that we’ve trained. We have built in time for collaboration, and a space for teachers to go learn and grow together as they’re implementing Common Core. It’s a way to help them to feel as competent and as effective as they did in the previous arena.

Some superintendents said they kind of feel like they’re in the dark about what to expect with the upcoming end of the year Smarter Balanced assessments.

I think that’s very accurate. I would be very direct on the point and say the state absolutely missed the opportunity by not giving us reports from last year’s pilot. It would have been useful if they gave us feedback on where we are, what happened, and how we did, and what is the cycle of reporting going to look like. And then they finally released the (interim assessments), but now we’re backed up so close to the actual administration of the exam. The best we can do now is offer it as an option. We have minimal usage. I don’t blame teachers. They look at this and they go, “I already have a testing cycle come up. I don’t want to spend any more time on this when there’s really not anything I can do with the results between now and the time I’m gonna give the exam anyway, so let’s just keep doing what I’m doing until we give the exam.”

I think all of those issues around concerns are well founded, and that’s a place where I do not think we thought this through as completely as we probably should have as a state. We know that these more rigorous assessments are going to show that our kids are not where they were on the last round of assessments on the California Standards Tests.

We’ve heard from teachers around the state, including from some in Fresno, that there’s tension around whether teacher preparation is being district driven or teacher driven. Where’s the balance?

We’ve spent an awful lot of time on how we manage our student time, but we realize we had not been as dutiful on our staff time. And so we built out what we’re calling our Professional Learning Master Schedule, where we’re trying to get everything mapped out electronically, where we can show what’s being offered by whom, to whom, when, and for what purpose, and all the rest of that. And what we found was what we knew to be true: we have too much – we have overlap, we have some things that are not coordinated well. And, candidly, we have more professional development offered than teachers could possibly squeeze (into their schedules).