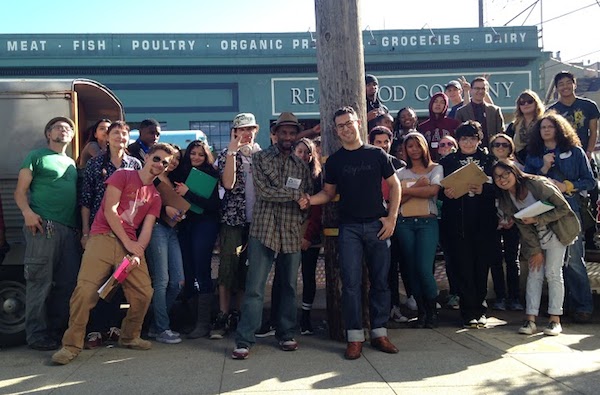 Transit planner Stephen Newhouse didn’t know what to expect when he was asked to evaluate a high school student project on transit options in a neighboring county.

What Newhouse found when he stepped into Richmond City Hall that day was a transit planner’s nirvana.

More than 200 people joined city officials for the presentation in a packed meeting room. Most of the attendees were people of color, and interpreters translated the action through headsets for non-English speakers – easily about half the crowd, Newhouse estimates.

Newhouse was amazed at the huge, diverse crowd that had gathered to hear Richmond High School students’ recommendations on the heady-sounding South Richmond Transportation Connectivity Plan. The students were eloquent and informed, the audience was engaged and a major city transportation project was receiving a solid community vetting.

The work was a major project students completed for the city of Richmond, which is a partner in a growing education program that is working to make civics more relevant to students.

The program, called Y-PLAN, or Youth – Plan, Learn, Act Now, introduces students to community and government service by making them active participants in projects that affect their lives.

Such programs are seen as a key part of efforts to improve civics education in public schools. Educators and policy experts are raising the alarm about what they say is a de-emphasis on civics instruction, which has largely been left out of efforts to reform education, such as the Common Core State Standards, which focus on math and English.

The work also provides a powerful outlet to include diverse residents in public policy and inform students of their democratic voice.

“As students, we didn’t know that we had any form of power. It raised our community awareness,” said Richmond High School sophomore Dante Miguel, 15, who participated last year in a Y-PLAN project focused on something close to students’ hearts: improving lunch facilities at his school, where students would often spend their entire lunch period waiting in line.

Y-PLAN, based at UC Berkeley’s Center for Cities and Schools, puts students to work in authentic civic projects where their feedback and input informs government planning.

“When we have meetings, usually we get 25 people and they are the same 25 people,” said Newhouse, a transit planner for Alameda County’s bus agency, Oakland-based AC Transit, who has used Y-PLAN to task students in Oakland and Berkeley with projects to help improve service. “I saw Y-PLAN as an exciting way to get broader input from the community and also reach out to people who are going to live with the consequences of our decisions.”

That authenticity is at the core of Y-PLAN, said founder Deborah McKoy, executive director of the Center for Cities and Schools.

“There has to be some city leader that has a question and the power to implement kids’ ideas; otherwise it’s a simulation in service learning,” McKoy said. “We’ve done that for decades. What’s new is that kids are a real consultant on a real problem.”

“As students, we didn’t know that we had any form of power,” said Richmond High School sophomore Dante Miguel, 15.

Students had been asked to solicit community input on increasing access to the shoreline, which is separated from the residential areas of Richmond by railroad tracks and a major freeway that bisects the city.

Students administered and tallied 579 community surveys and ultimately presented a package of recommendations to the city that included suggestions for more bicycle access, improved bus service, wider sidewalks and incentives to bring businesses and entertainment venues to the area to attract more residents.

“There’s something powerful when kids are engaged in their community,” McKoy said.

Interest in Y-PLAN’s work is growing, dovetailing with the push for more and better civics education in schools. Originally centered in schools in Richmond, Oakland, Berkeley and San Francisco, Y-PLAN is now operating in nine cities across the nation, with programs in New York City, Detroit, Dallas, New Orleans and Washington, D.C.

Some 1,200 students across the nation are participating in Y-PLAN projects this year, a 77 percent increase from last year, said Jessie Stewart, national Y-PLAN director. The projects run the gamut from combating community blight to combating hunger by ensuring access to fresh foods in low-income communities.

For most projects, students create and complete a survey, and then go out into the community to solicit public input on the project. The MetWest students, for example, rode buses in their neighborhood and spoke with riders to help AC Transit improve service.

Students then compile their results into recommendations for their “client” – as the public agencies are called. Students present their recommendations to agency officials in a public meeting, whether it’s to the city council, school board or transit agency board.

UC Berkeley undergraduates from the Center for City and Schools and agency officials mentor students throughout their projects, but students are pushed to let their own observations and feedback from the community inform their recommendations.

Besides a grounding in civic participation, the projects help build critical thinking, teamwork and data analysis skills that are seen as crucial to helping prepare students to succeed in college and careers.

“I never felt that I was that involved in my community until I started with Y-PLAN,” said Melissa Avalos, a Richmond High School graduate whose senior project also surrounded the city’s transportation plan for the south shoreline, where UC Berkeley plans a 134-acre research and educational facility called the Berkeley Global Campus.

Avalos and her team reviewed maps and surveyed students and community members and presented their findings to the city at the end of the year. Avalos is gratified to see some of her group’s recommendations – improved bike lane access, for instance – have been implemented.

“I kind of wish I had started it a little bit earlier,” said Avalos, now 20 and a student at Contra Costa College in San Pablo. “It was my last year of high school and it was the greatest experience. I got the opportunity to feel that I actually had input in my community.”

Creating opportunities for students to become actively engaged in civic projects is an effective tool for fostering stronger community involvement with the next generation, according to a 2014 report by the California Task Force on K-12 Civic Learning. The report calls for revising the state’s history curriculum to put a stronger emphasis on civic learning.

“The health of our democracy depends on our schools producing informed voters and community members who value the importance of civic life,” said the report, which raised the alarm about low voting rates among young people, an ignorance of U.S. History, and a lack of interest in state and local politics and issues.

Only 8.2 percent of eligible 18- to 24-year-olds voted statewide in the November 2014 general election, according to a January report from the California Civic Engagement Project at UC Davis. That’s about 285,000 out of 3.5 million adults in that age group.

“The biggest problem is engagement,” said Gary K. Hart, a former state senator who served on the civics task force. Hart was not aware of Y-PLAN, but he said projects like Y-PLAN and CIVITAS, a civic engagement curriculum that includes an internship and a community-service component, provide important hands-on opportunities for students. The work is especially important given California’s large immigrant population, Hart said.

“Getting students into the community is a much better way to learn and certainly a way to engage students,” Hart said. “… It’s things right in the neighborhood, right next to the school – all these laboratories that are out there that students could be exploring.”

Getting to know his community was one of the high points of Y-PLAN for Richmond High graduate Jose Castillo, who participated in the Berkeley Global Campus project with Avalos.

While Avalos and her team worked on transit options, Castillo’s team was tasked with providing recommendations on enticing visitors to stay in the area after visiting the research facility. Castillo and his peers toured the city to learn what Richmond already offered. They discovered gems they didn’t know existed, such as museums and historic sites, a weekly farmer’s market and ethnic shops and restaurants.

The teams’ recommendations encouraged the city to promote the area better and encourage pedestrians and cyclists by widening streets, improving lighting and increasing the police presence.

“I really didn’t think they were going to take us seriously,” said Castillo, who said he didn’t know much about city government before Y-PLAN.

“Now we know that if we have a problem, if we structure it well, we can go to the city council and let them know what we think,” he said.