Children get extra semester before kindergarten with midyear classes 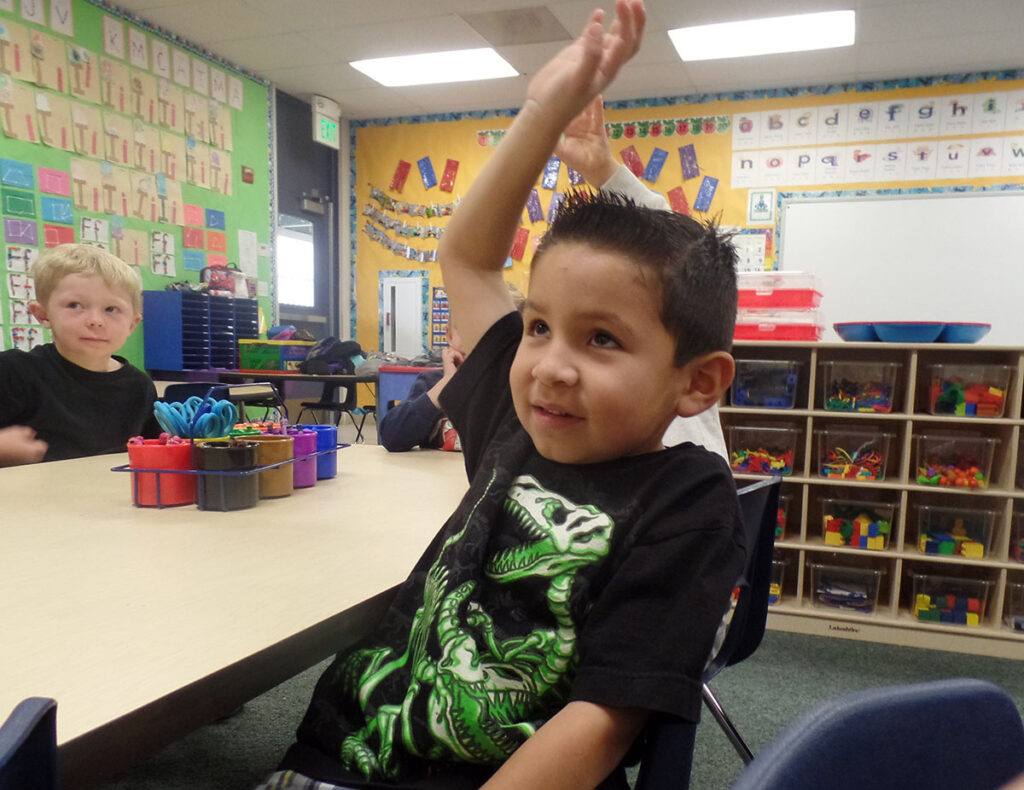 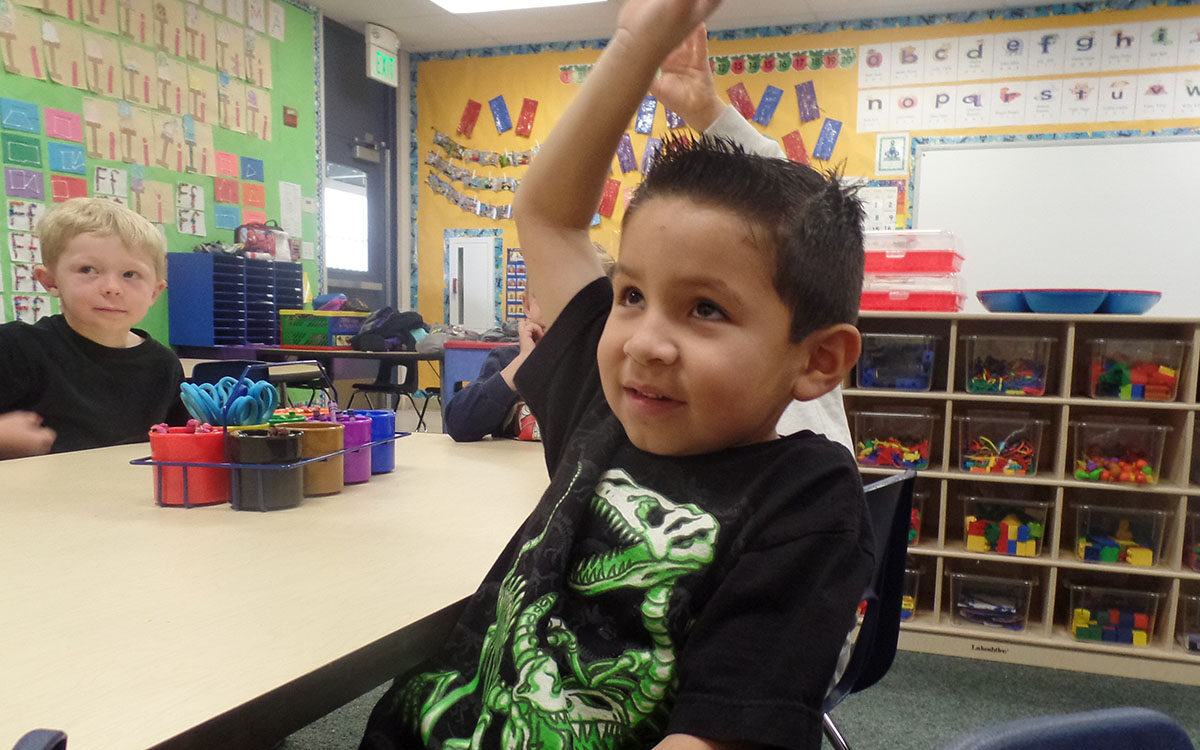 Lucas Medina raises his hand in a Preppy Kindergarten class at Glenview Elementary School in Placentia-Yorba Linda Unified School District on May 27, 2015.

Lucas Medina raises his hand in a Preppy Kindergarten class at Glenview Elementary School in Placentia-Yorba Linda Unified School District on May 27, 2015.

When a new California law began requiring kindergartners to be 5 by Sept. 1, lawmakers launched a full-year transitional kindergarten program for children who used to be eligible for that class – 4-year-olds who turn 5 in the fall.

But some districts also add a semester of schooling for younger children – those who turn 5 after the transitional kindergarten eligibility window, which is Sept. 2 to Dec. 2.

“This is just one small way of getting to those kids,” said Vickie Ramos-Harris, state director of policy and practice for Early Edge and author of a report on midyear transitional kindergarten.

Lawmakers passed the Kindergarten Readiness Act in 2010 because they wanted children to start kindergarten when they are older, like many other states were already doing. For those children with fall birthdays, transitional kindergarten gives an extra year of schooling before they enter regular kindergarten.

Districts receive state funds for transitional kindergarten children and for children who turn 5 later in the year, just like any other student, based on the average daily attendance in those classes. Some districts use the state funds to start the midyear classes after the children turn 5.

5th birthday comes after Dec. 2 and usually no later than March. Classes begin in January.

5th birthday is after Dec. 2. Enrollment is prioritized by birthday, with the oldest children admitted first. Classes begin in the fall.

The Los Angeles Unified School District looked at the concept when the board voted last week to drastically expand its transitional kindergarten program to serve children with 5th birthdays after Dec. 2. Instead of just adding one semester in the spring, the state’s largest district is using its own money to enroll about 2,800 children starting in the fall. Then, the district will collect state funds for the students after they turn 5.

It’s unknown how many midyear programs exist statewide, Ramos-Harris said. The California Department of Education does not track those programs.

They are often small, use different schedules and are created by individual districts, both urban and rural. They also go by different names, such as Preppy Kindergarten, Early Admission to Kindergarten, or EAK, and Mid-Year TK.

“I think primarily we were looking for a way for more children to have school experience before kindergarten,” Schwartz said.

Placentia-Yorba Linda Unified School District started its Preppy Kindergarten midyear classes because of requests from the parents of children who barely missed the transitional kindergarten cutoff. This past school year, the district ran three, half-day classes for students who turn 5 after Dec. 2, as late as February.

“We find a tremendous benefit. They will get a half year of Preppy K curriculum,” said Dorie Staack, the director of elementary education in Placentia-Yorba Linda, a 25,000-student district in Southern California.

For some students, the Preppy K class is their first experience with school. Other children would have been in private preschool otherwise.

Christy Vis, the mother of a boy at Glenview Elementary School in Placentia-Yorba Linda, said she was relieved that the midyear program was available for her son, who turned 5 on Jan. 21, so she could avoid paying for preschool.

“I think it’s a great opportunity. It’s great for the kids when they get to kindergarten,” Vis said.

The classes have more flexibility, playtime and songs, all incorporated with academic learning, such as numbers and letters, Staack said.

“We have very high academic standards for the kids. But it doesn’t look academic when you just look at it,” Staack said.

In the Glenview class in Anaheim in late May, the room was set up with centers – blocks and trains on one wall, a writing and drawing kiosk on a table, a house area with a doll crib, costumes and puppets. The teacher rolled a table with sand and seashells outside.

But students also spent time learning letters, especially at the end of the school year. The students got worksheets and had to figure out if the pictures start with P.

Later, the teacher asked children to tell her things that start with P, such as pancake and paw, that she drew on a big sheet.

While educators and parents see the benefits, the logistics are difficult. Parents have no guarantees that there will be space available until well into the school year.

Schools must have extra room that can be used just half of the year. Administrators must find teachers who are willing to work half a year or get different assignments for the other half.

At Glenview, the Preppy K class took over a room used for art, which was moved to a portable that was already on site. The teacher worked as an intervention instructor in the fall. The materials and furniture cost about $35,000 to set up each classroom, Staack said.

In La Mesa-Spring Valley, district administrators start in October looking for any extra space left at schools for the midyear classes. Then they call parents to enroll.

“We value the opportunity for these kiddos. But if it comes down to the point where we don’t have any space, we don’t have space,” Schwartz said.

Placentia-Yorba Linda keeps a list of interested students at the district office. When officials know when and where there’s room, they call parents in order of the child’s birthdate – starting with the birthdates closest to Dec. 2.

To make things easier next school year, Placentia-Yorba Linda plans to leave student slots open in regular transitional kindergartens and admit new students as they turn 5 later in the year.

“We haven’t seen this on a large scale because it’s a little tricky because of the money and logistics,” Ramos-Harris said.