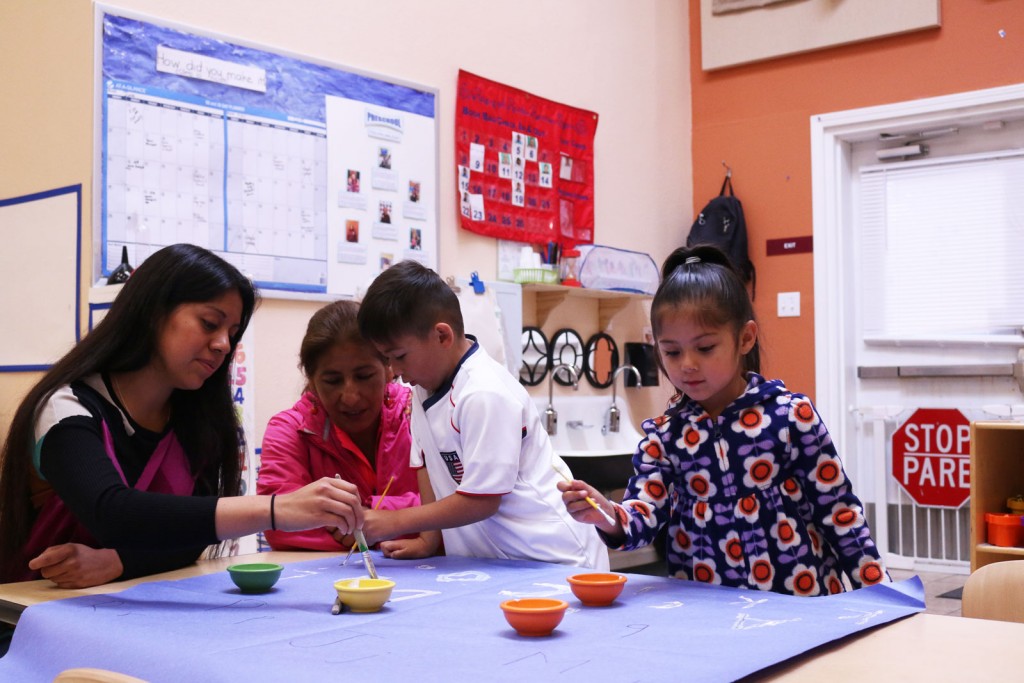 Maria Alicia Lemus, a lead teacher in a Head Start classroom in San Francisco’s Bayview neighborhood, loves her job. She’s just not sure how long she’ll be able to afford it.

Lemus said she makes $31,000 a year, after paying taxes, for her work at Head Start, the federally funded program for vulnerable children – a salary that’s not much more than what the families who qualify for the program earn.

“People don’t see the value in early education,” said Lemus, 24, of the wages she earns. “The hard work we do every day.”

Lemus, who is single, does not meet the federal government’s poverty guidelines of $11,770 for a one-person household, but like many early childhood teachers, she feels she is just a broken-down car or steep medical bill away from being in the same boat as the families of the children she teaches.

And that’s despite working another job.

Lemus is dedicated to pursuing early education work for her whole career, but losing ambitious teachers like her to higher paying K-12 jobs is a real risk. For those who do stay, making ends meet is a constant challenge, especially in high-cost-of-living states, like California, and expensive cities, like San Francisco.

“The programs serving the most vulnerable children are the programs that you need the most stable and caring staffing,” said Gretchen Ames, who teaches a course on public policies relating to children at San Francisco State University. But she says that staff in these programs “are the most likely to have unstable lives” because of the economic hardships they face.

Ames, who is now pursuing a doctorate in educational leadership at Mills College in Oakland, California, worked in a center like Lemus’ last year. Every teacher in her classroom had at least one, if not multiple, other jobs. Ames believes the teachers’ stress exacerbated the stress in the lives of their students. One woman worked a night shift as a nurse’s assistant in addition to her work as a teacher. Ames said there were days when the woman would come to work after not having slept for 24 hours.

“She would come to work so tired and she would try to read a book to a child and just fall asleep,” Ames said. “Her heart is in the right place, but she couldn’t stay awake.”

Lemus works long hours too. She starts her day at 7:20 a.m. to prepare for the 8 a.m. arrival of students. From then on, she’s in constant motion. One minute she’s navigating outside play time, the next she’s leading students back into the classroom, where she reviews the days of the week with the class and showed them simple addition problems.

Her classroom is bilingual and Lemus switched easily between English and Spanish throughout the day. Although she was born in Los Angeles, Lemus spent most of her childhood in El Salvador and didn’t return to the U.S. until she was 12-years-old.

Like her, all but one of the four teachers in Lemus’ classroom immigrated to the U.S. from Latin America. And every one of them is struggling to pay bills. One woman lives with her daughter in order to afford San Francisco’s high rent; another is in low-income housing. A third teacher was just evicted from her home in San Mateo, 30 minutes to the south of the city, and is now living with her daughter in San Francisco’s mostly low-income Bayview neighborhood while she tries to find new housing.

“Sometimes I don’t know how I do it every day,” said Maria Alicia Lemus, a lead teacher in a Head Start classroom in San Francisco.

While early educators living in less costly cities and rural areas of the state have it a bit easier, these San Francisco teachers are hardly alone in struggling to live comfortably on their salaries. According to the University of California, Berkeley report, almost half of the families of child care workers need financial help from government assistance programs.

But it hasn’t always been that way. Marcy Whitebook, director of the Center for the Study of Child Care Employment at UC Berkeley, said that when she began working in the field over 30 years ago, California paid early educators well.

After World War II, California was the only state to maintain the child care centers it had opened during the war to accommodate the young mothers who replaced men in the workforce. According to Whitebook, who has written about the history of early childhood education, these centers were of high quality and developmentally appropriate for the children they served.

But, over the years, quality standards and funding eroded, Whitebook said. This trend continued in the early 1970s when Whitebook entered the early childhood education field.

“[Child] care was never defined as a necessary service,” she said.

And that, she explained, is one of the reasons why things have not improved much for the nearly 56,000 preschool teachers in the state.

Over the years, there have been a few efforts to help early childhood teachers, including those who work for Head Start, according to Elise Crane, a senior policy analyst in San Francisco’s Office of Early Care and Education. In 2000, San Francisco County responded to an exodus of teachers being lured away from the profession by the dot-com boom by establishing a program to supplement their wages, Crane said. Newly named C-WAGES in 2012, the program helps public centers pay their staff based on the workers’ job title and education level so that earnings start to move closer to a living wage.

The city’s nearly $13.5 million initiative, only $500,000 of which comes from the state, provides a salary increase to early education workers like Lemus who work in centers in which at least 25 percent of the students come from low-income families as defined by the local child care planning council in San Francisco (a family of four making less than $46,896 a year is considered low-income), Crane said. These extra wages are provided to workers at 80 centers in the city, including all Head Start programs, as well some staff at family child care facilities.

Sara Hicks-Kilday, president of the San Francisco Child Care Providers’ Association, concedes that this makes the wage situation better in San Francisco than other cities in the state, even neighboring Oakland. But it’s not nearly enough for young workers, like Lemus, who want to live in the city, she said.

Even with initiatives like C-WAGES, it’s becoming more and more difficult to find qualified teachers to work in Head Start classrooms with the kinds of wages being offered, according to Rick Mockler, the executive director of the California Head Start Association.

“Hiring has gotten tougher across the board partly because the market for teachers is changing,” Mockler said. “We’ve helped a lot of our teachers get B.A.’s, so a lot of them are getting hired by school districts if they have a credential. With transitional kindergarten, school districts have more money to hire more teachers.”

While some argue that parents with means should pay more tuition in certain schools, Crane said center leaders can only ask so much of even moderate-income families, who are themselves struggling with San Francisco’s rising cost of living.

“You can’t ask these low-income parents to share the costs, and the state isn’t willing to pay more to serve these students,” Crane said. “It comes down to a values thing.”

At 4 p.m., Lemus leaves the center for her second job. The children’s parents don’t usually pick them up before 5 p.m., but the school understands that Lemus needs to work two jobs. The three other teachers remain in the classroom until all the children have been sent home. By 6 p.m., Lemus is back at work, delivering meals ordered through an app called Sprig to people’s doors in neighborhoods where homes got for millions of dollars.

“Sometimes I don’t know how I do it every day,” Lemus said as she drove through the San Francisco streets. “I think I do it because I care. I know I’m making an impact. A small one, but it’s something.”

This story was written by The Hechinger Report, a nonprofit, independent news organization focused on inequality and innovation in education. Read more about California schools.