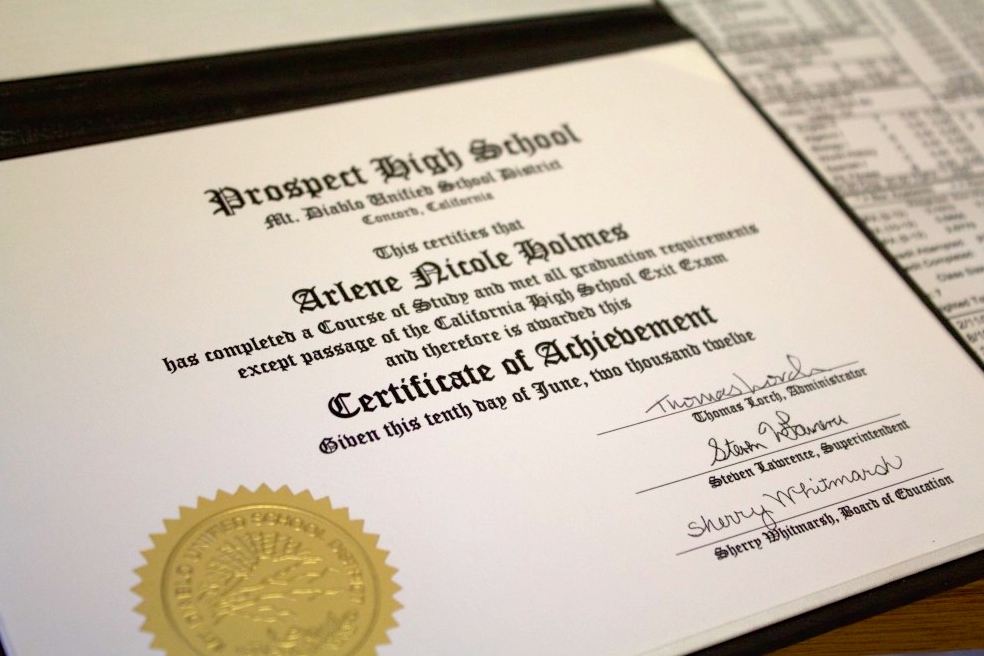 That is what the state of California is poised to tell between 40,000 and 150,000 students who for nearly a decade may have been denied a high school diploma because they failed to pass the California High School Exit Exam, or CAHSEE.

Senate Bill 172, authored by State Sen. Carol Liu, D-Glendale, is awaiting Gov. Jerry Brown’s signature, and he seems likely to sign it.  It follows earlier legislation (SB 725)  that addressed an immediate problem. When the state abruptly stopped administering the exit exam last summer, some students from the class of 2015 found themselves stranded – admitted to a college, but without an opportunity to pass the test that they needed to enroll this fall.

With surprising speed, the Legislature decided to grant all seniors a diploma who had been denied one last year because of their failure on the exit exam. Liu’s bill in its original form would have suspended the exit exam for the next three years so the state could consider alternatives to the current exam, including coming up with one aligned with the Common Core state standards.

But her bill was revised in the final days of the legislative session — and expanded dramatically —  to say that any high school senior denied a diploma because of the exit exam since 2006 – not just since last year – should now be awarded one.

It is hard to recall a major education reform like this being repealed – and then for lawmakers to try to undo its impact retroactively. It highlights the unintended consequences of a well-meaning effort to raise standards and, in the case of the exit exam, to make sure that a California high school diploma ensures a minimum level of competency.

When it originally approved the high school exit exam, the state Legislature’s primary goal was to “significantly improve pupil achievement in high school and to ensure that pupils who graduate from high school can demonstrate grade level competency in reading, writing, and mathematics.”

Lawmakers were persuaded that it was reasonable to expect students with a high school diploma to be able to read and do math at a basic level of proficiency. In fact, the content students were tested on in the exam was set relatively low – between an 8th- and 10th-grade level.

Yet the exit exam is the ultimate “high stakes” test. Students unable to pass it were pushed out into the workplace without a diploma – a circumstance that can have profound consequences for their economic prospects throughout their lives, as well as their health. In fact, epidemiological data show that people without a high school diploma on average live nine years less than someone with one.

It is impossible to know whether legislative action will be able to make up for doors closed or paths not taken for students who did not graduate because of their inability to pass the exit exam.

It was not as if the exam was given an easy pass. For years, it was subject to a range of legal and legislative challenges.

For each year the exam was administered, the state commissioned the Virginia-based Human Resources Research Organization, referred to as HumRRO, to produce an annual evaluation on the success – or lack thereof – of the program.

It did so each year from 2000 to 2014. But the reports typically were hundreds of pages long, were written in dense policy jargon, and featured conclusions and observations described in a cascade of tables and graphs that were often hard to follow.

Evaluators in general painted a favorable picture of the exit exam. Last year’s report, for example, concluded that “CAHSEE test results show significant increases in students’ competency in targeted skills since the implementation of the CAHSEE requirement.”

The report pointed out that the percentage of high school seniors who passed the exam increased from 91 percent in 2006 – the first year that it was made an actual requirement for getting a diploma – to 95.5 percent in 2014, the last year for which figures are available.

But those figures were deceptively optimistic, as even the HumRRO report noted.

Firstly, the report stated that the percentages of those who passed the exam didn’t include all the students who dropped out of high school before getting to their senior year. “We recognize that excluding students who dropped out before grade twelve from the computation of passing rates may overstate student success in meeting the CAHSEE requirement,” the report said.

Secondly, in a state the size of California, even 4.5 percent of seniors leaving school without a diploma is a sizeable number.

The report estimated “that there is some evidence from our prior analyses that the CAHSEE requirement has prevented or delayed between 1 and 4 percent of seniors from graduating.” Based on that estimate, between 37,695 and 150,780 students would have been denied a high school diploma because of the exam since it became a graduation requirement in 2006.

What also was not anticipated was the disproportionate impact the test would have on English learners, who were expected to take the tests. They were supposed to get help, including being provided with glossaries in their native languages, as well as translators should they need them. But HumRRO evaluators observed that at times neither glossaries nor translators were available for students, concluding that the exit exam “has been a significant barrier for students classified as English learners.”

These observations, buried in the mountain of data evaluators gathered, received little attention, as did the fate of students who were unable to pass the test.

Now some of those students will likely emerge from the shadows to claim their diplomas, and tell their stories.

Policymakers now face a tough choice about what to replace the exit exam with, or whether to do so at all.  However, no immediate decision will be needed.  SB 172 which is awaiting Gov. Brown’s signature  will suspend the exit exam for another three years. It also instructs State  Superintendent of Public Instruction Tom Torlakson to convene a panel to advise on whether to continue the exit exam or to come up with “alternative pathways” to meeting high school graduation requirements.

But if California imposes a new exit exam it would need to be aligned with the more rigorous Common Core standards.  In that case, it could push some students to do perform at a higher level academically.  But it could also result in even larger numbers of students failing the exam – who in turn will be at risk of being pushed to the margins of our society.

60851.6. (a) Notwithstanding Section 60851 or any other law, the governing board or body of a local educational agency, and the department on behalf of state special schools, shall grant a diploma of graduation from high school to any pupil who completed grade 12 in the 2003–04 school year or a subsequent school year and has met all applicable graduation requirements other than the passage of the high school exit examination.