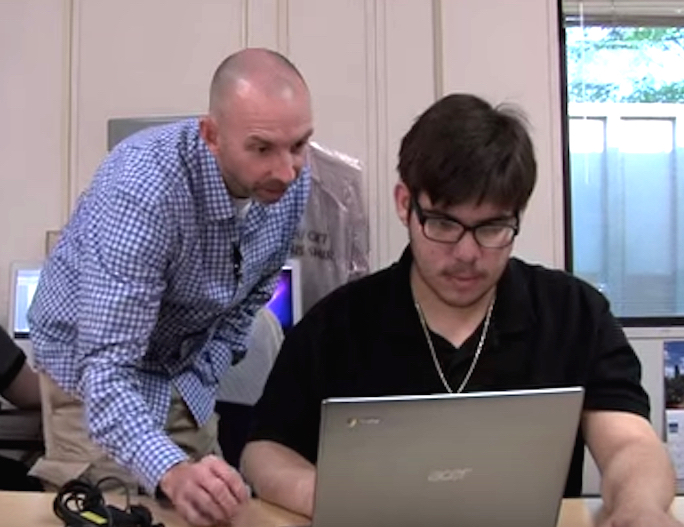 Credit: Downtown College Prep
Across the Bridge Foundation, the only California charter organization selected for a startup grant, will receive $827,000 this year to expand charters serving middle and high school students in San Jose, including Downtown College Prep, where history teacher Jon Fitch works with a student.

Credit: Downtown College Prep
Across the Bridge Foundation, the only California charter organization selected for a startup grant, will receive $827,000 this year to expand charters serving middle and high school students in San Jose, including Downtown College Prep, where history teacher Jon Fitch works with a student.

California, which received $250 million in federal money over the last five years to foster the growth of charter schools, will get none of the $125 million that will be allocated in the next round of funding, the U.S. Department of Education announced Monday.

The Charter Schools Program is the primary source of hundreds of thousands of dollars in startup money for charter schools, particularly small independent operators. Aspiring charter operators will find it extremely difficult to open without that support, said Eric Premack, director of the California Charter Schools Development Center, which guides charters through the process of opening schools. Saying he was “stupefied” by the new allocation, Premack said this will be the first time California, the state with the largest number of charters, has been shut out of federal funding in two decades.

The federal program gave California charters state-administered seed money of  between $200,000 and $500,000 over three years; after that, they depended on state-funded tuition money.

Under a peer-review process, eight states were to divide $125 million in 2015-16. The Department of Education awarded an additional $32 million to a dozen existing, high-performing charter organizations to expand. Only one is based in California. San Jose-based Across the Bridge Foundation, which operates Downtown College Prep, San Jose’s first charter high school, will receive $827,000 this year and a total of $2.4 million over five years to expand to six middle and high schools serving low-income students.

Premack attributed California’s low ranking to changes in the judging criteria. The Department of Education’s new criteria encouraged stronger state oversight of charters and asked states to explain how charters fit into their reform strategy, he said. “It assumes that a state exerts power and authority over charters, which is not the case in California,” he said. California law is structured to leave primary oversight and approval to local districts.

Premack also said judges awarded few points to California for high-quality charters – even though a 2015 national study of urban charters by CREDO, a research a research institute at Stanford University affiliated with the Hoover Institution, found that California’s charters, serving minority and low-income children, were among the most effective in the nation. The CREDO studies found that district schools in Ohio, which was awarded the largest state grant,  significantly outperformed charter schools overall.

The department also awarded extra points to states that had not previously gotten start-up grants.

Myrna Castrejon, acting CEO of  the California Charter Schools Association, said the association wasn’t completely surprised by the outcome. “California has been fortunate to receive continuous support for the growth of charter schools for nearly 20 years, even as the national movement has grown significantly and federal dollars have remained mostly constant,” she said. “This year’s competition strongly favored newly eligible states – in some ways we could say we were handicapped by our record of success.”

Last week, the Los Angeles Times reported on a proposal by the Eli and Edythe Broad Foundation to encourage other foundations to join it in donating $490 million to add 260 charter schools in Los Angeles Unified over eight years. It’s not clear from the proposal whether federal seed money was factored into the plan.