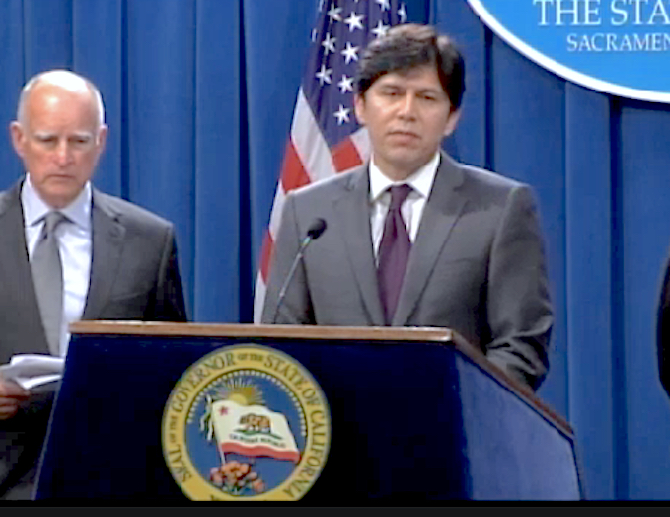 Gov. Jerry Brown got the bottom line he wanted faster than expected.

Brown and legislative leaders announced a budget deal Tuesday, one day after state lawmakers approved spending $2 billion beyond what the governor said he’d accept. The final agreement will not alter the record education spending that Brown proposed through Proposition 98, the voter-approved formula that determines revenue for some preschool programs, K-12 schools and community colleges.

Lawmakers did obtain some concessions within the $115.4 billion spending plan Brown presented last month: 7,000 additional full-day preschool slots and 6,800 more childcare vouchers that parents can use to pay daycare providers; and 10,000 additional students at the California State University and 5,000 more students at the University of California, if UC meets conditions that Brown is requiring. Senate President pro Tem Kevin de León, D-Los Angeles, called this extra money for the “book ends” of students’ education critical to providing children “a fair shot” at success.

After years of cuts in education funding following the recession, the $68.4 billion for Prop. 98 in the coming year is a remarkable turnaround. The  12.3 percent increase is $7.5 billion more than the $60.9 billion last year.

One-time and ongoing appropriations for K-12 schools and community colleges will total $14 billion next year. This includes revised revenue estimates for the current year, after school districts’ budgets were already set. A third of the money will go to pay off debts to schools built up during the recession.

Highlights of spending next year for education include:

Responding to a strong push from business and community groups, early education advocates and legislators, Brown agreed to allocate $265 million for early education that included an increase in reimbursement rates by 5 percent to preschool and childcare providers, and by 4.5 percent to providers paid by vouchers.

“If you look at it from what the kids need, we have a long ways to go,” said Ted Lempert, president of Children Now, an advocacy group based in Oakland that got 350 organizations to sign a letter to the governor on behalf of early education. “But if you look at it from what we were expecting, it’s strong. The Legislature threw together a really strong package, and the bulk of the package is in there and that’s great.”

The 7,000 new slots — plus the 2,500 part-day preschool slots for children with exceptional needs — are a step toward a goal of 31,500 slots needed to provide preschool for every 4-year-old from a low-income family.

The number of childcare vouchers needed is not clear, said Giannina Perez, director of early learning and development policy for Children Now. In June 2011, the state disbanded its waiting list for low-income families who needed help with childcare costs, Perez said. At the time, that list had 200,000 eligible families, she said.

Of the $265 million total, $100 million will now be part of the Prop. 98 guarantee, something the early education advocates had wanted because of the recent huge influx of funds into Prop. 98 compared with the rest of the state budget. Education groups, such as the California Teachers Association and the California School Boards Association, had opposed adding more preschool funding into the guarantee for K-12 schools and community colleges.

Brown did not allocate an additional $25 million for the state’s $550 million fund for after-school programs as legislators had proposed. The program has not seen an increase since it was first implemented in 2006.

The fat budget years for education are expected to level off with the expiration of temporary taxes under Proposition 30. Surging revenues have enabled the state to pay back most of the more than $10 billion in Prop. 98 allocations owed to districts in past years, called the maintenance factor. But districts are still owed $700 million, and that amount is expected to grow post-Prop. 30.

Because the Local Control Funding Formula steers additional money to districts based on their enrollments of “high-needs” children – low-income students, English learners and foster youth – some have caught up to or surpassed pre-recession spending levels, adjusted for inflation, but others still have not.