Bill would require 'breakfast after the bell' at more schools 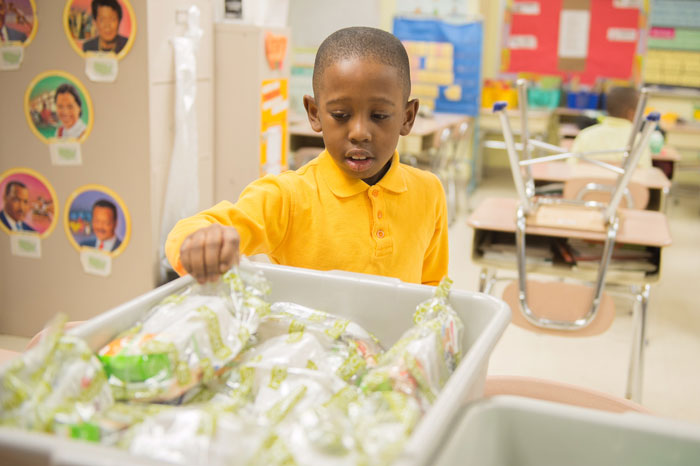 Taking aim at the effect of hunger on students’ ability to learn, two California legislators announced Tuesday a bill that would require more schools to provide breakfast after the start of school.

The proposed legislation would revamp the way many schools operate the federal School Breakfast Program, widely regarded as an underutilized source of nutrition for hungry students. Districts are also aware that under-enrollment in the school breakfast program has left millions of dollars on the table in federal meal reimbursements for low-income students.

Nationwide, about half the number of students who receive free and reduced-price lunches eat school breakfast, and researchers say the main obstacle is that students must arrive 30 minutes or more early to eat breakfast in the cafeteria.

“One morning [a student] came in late, and was grabbing at his stomach,” said Alex Perez, a Los Angeles elementary school teacher. “He couldn’t concentrate.”

“The highest participation rates are in schools where students are allowed to eat breakfast in the classroom,” said Jim Weill, president of the Washington, D.C.-based Food Research and Action Center, a national organization working to eradicate hunger in the U.S., which released two reports in February: School Breakfast Scorecard 2013-2014 and School Breakfast: Making it Work in Large School Districts.

The legislation, Assembly Bill 1240, co-authored by Assemblyman Rob Bonta, D-Oakland, and Assemblyman Tony Thurmond, D-Richmond, would align California with a nationwide push to feed breakfast to more children by serving it after the bell, either in the classroom, as a grab-and-go meal from a cart or as a second-chance breakfast during a mid-morning classroom break. In August, the California School Boards Association and the Oakland-based nonprofit organization California Food Policy Advocates promoted the benefits of school breakfast, including an increase in test scores, in a governance brief, Starting a Breakfast After the Bell Program.

In a national survey released Tuesday of 1,000 teachers, principals and staff, three out of four public school teachers said students regularly come to school hungry and 84 percent of principals said students are hungry because they don’t have enough to eat at home, according to a Hunger in Our Schools report by No Kid Hungry, a Washington, D.C.-based advocacy group.

“One morning [a student] came in late, and was grabbing at his stomach,” said Alex Perez, a Los Angeles elementary school teacher who is quoted in the Hunger in Our Schools report. “He couldn’t concentrate. Because he hadn’t eaten; there was nothing at home. And he had to walk to school alone. It’s not the child’s fault.”

The stress of being hungry at school is intense. “Hungry kids struggle to learn,” Thurman said.

Research has found that school breakfast programs improve students’ test scores, attendance, concentration and behavior, according to 48 research studies and papers identified by California Food Policy Advocates, which is sponsoring the bill.

The proposed legislation provides a three-year phase-in of breakfast changes, beginning in 2016-17, and affects only schools where at least 40 percent of students qualify for free and reduced-price meals.

The shift in schedule and venue – serving breakfast more than a half an hour later and moving it out of the cafeteria – has been shown to dramatically increase the number of students eating breakfast. In the Los Angeles Unified School District, participation in the school breakfast program rose from 29 percent to 81 percent of students over three years. The increase came as the district phased in an extensive breakfast-in-the-classroom program. That program generated consternation among some teachers, who said breakfast would use up precious instructional time and attract rodents to the classroom.

Laura Benavidez, co-director of Food Services for Los Angeles Unified, said that she and her staff  try to make the meal easy to serve and clean up. When a kindergarten teacher said that oranges take too long for her students to peel, the cafeteria staff provided orange slices. When a teacher said she’d like a spray bottle of cleaning fluid and paper towels, instead of a cleaning cloth, the change was made. Each classroom is provided with a rolling trash can to be used only for the breakfast program, and the can is rolled out of the classroom after breakfast.

And when a teacher said that breakfast was taking more than 15 minutes, Benavidez visited the classroom and talked about how other teachers have made the most of a 10- or 12-minute breakfast by reading to students or having students read to themselves. Others use the time to take attendance and collect homework.

“The upside is you have a child who is focused and ready to learn,” Benavidez said. “These were children we knew weren’t eating before.”