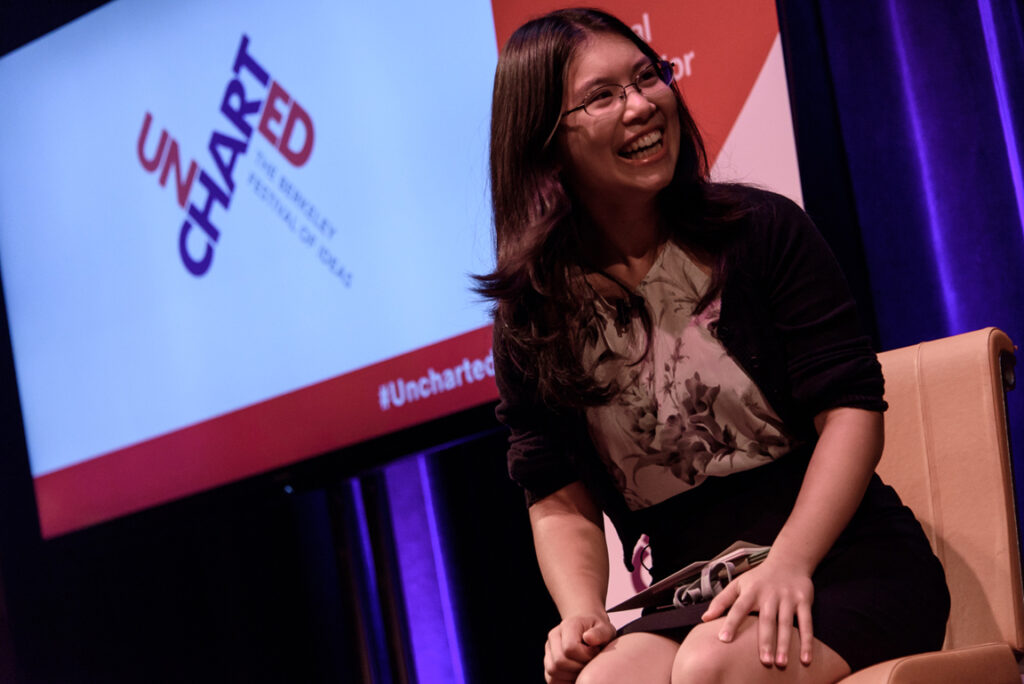 At the age of 8, Adora Svitak published her first book, “Flying Fingers,” about the joys of reading and writing. At 12, she gave a TED talk on “What Adults Can Learn from Kids,” which has since been viewed more than 4 million times. Now a sophomore at UC Berkeley, Svitak has taught writing workshops in several states, frequently blogged and spoken about education reform to teachers’ and students’ groups internationally.  In 2011, she received an NEA Foundation Award for Outstanding Service to Public Education – an honor previously granted to Jane Goodall, Billie Jean King, and President Bill Clinton, among others.

Katherine Ellison interviewed Svitak on Oct. 17 at  “Uncharted 2015: the Berkeley Festival of Ideas,” in a session titled “Creating a Different Kind of Education.”  The interview was edited for brevity and clarity.

Q:  When you dream of the ideal classroom, what does it look like?

A: I visualize something that resembles what I had as a child. I was homeschooled up until 8th grade, and that provided a really sharp contrast with my experience in a public high school afterwards. My classroom at home was designed around my passions, so I got to learn about art history and the Mexican Revolution and human anatomy and everything in between. You’d be amazed at the overlap between the subjects. But what I really gained and valued was the opportunity to learn for learning’s sake.

Q: When you then started public high school in your home town of Redmond, Washington, how much of a change was that?

Q: How would you want to change things for other students?
A: I’d want to see more teachers who were really passionate about their subject every day. They’d have contagious enthusiasm so even if you didn’t understand what they were saying, you’d know that they cared. And the kids would be in it not just for the grade, but because they loved learning, too. I haven’t had that for a while, but this year I have that again, at UC Berkeley, and it makes me feel alive.

Q: How do we as a society produce that kind of change in K-12 classrooms?

A: It’s hard. Obviously the current status of teacher pay is an issue. When I was younger and wanted to be a teacher, my parents were cautious about that. Think about the housing costs in California where teachers can’t afford to live in the communities in which they teach. So if I as an ambitious young person who would also like to eat and sleep and live in a nice place, , that makes going into teaching really hard. Obviously this isn’t a new issue, but we need to hear more politicians talking about it.

Q: You have spoken a lot about the importance of listening to students about how they learn best, and what can be done in schools to help them. Why do you think students aren’t listened to more?

A: It’s easy for teachers and administrators to see students as adversarial because teachers and administrators are often put in the position of having to discipline us. And if you’re in the habit of handing out detentions and giving stern talkings-to, you very well might not see students as equals or as decision-making partners. And folks may not understand the ability students have to access information about their own education.

It’s not easy for students to have a strong voice on decisions that affect them. But I highly encourage you to look at StudentVoice.org. They’re really great about trying to increase student input into education.

A: Standardized tests serve a purpose.  As a nation we should not say that it’s okay for a student in Alaska or Louisiana to not know as much or not be as prepared as a student in California or Massachusetts. I’ve taught writing workshops to students in different states and one time I encountered students in urban Alaska who were wonderful and bubbly but didn’t know who George Washington was and didn’t know when the American revolution happened, and I was shocked. And I saw this is a possibility (of the kinds of basic differences in common knowledge that can happen) if you let everyone in their own locality do whatever they want.

Q: When you think about the Common Core, are students really feeling the impact of it? It’s supposed to be one of the biggest changes in 100 years but students we’ve interviewed so far say they haven’t felt much of a change.

A: I don’t think I’ve felt it. Mainly because as someone who’s gone to a wealthy suburban high school, a lot of our classroom instruction was probably up to par if not exceeding the standards that were laid out for our grade level. I think it (the impact of the Common Core) is most being felt by students in schools that have been under-performing.

Q: You talk about students having more of a voice in determining their own curriculum. At what age should that start?

A: It’s important to have faith in all children from a fairly early age that they’re capable of developing passions and interests —  as early as preschool or kindergarten. The ability to be interested in things is not some switch that comes on when you turn 13 or enter 10th grade. It’s a survival mechanism that you can see in babies. And schools can turn that off to an extent. There are some schools, like Montessori schools, that give students some measure of ability to drive their education from an early age and I think that’s a model that should be pursued more often.

Q: You turned 18 just two days ago. I guess you can no longer be described as a “child” prodigy. Do you feel a lot of pressure to keep doing magnificent things?

A:  When I was 9, I saw a newspaper headline: “Adora Svitak: The Cleverest Child in the World.” When you’re 9 and you see a headline like that, and you read a quote from a child psychologist who says you’re probably going to burn out by the time you’re an adolescent, and you’ll basically fizzle out and die a slow and painful death, that does shape how you grow up. But I wouldn’t ask for any different kind of childhood or adolescence. What I realized is what people think of you or the mean things people might say on your TED talk page, all that doesn’t really matter much. So I think I’ve made my peace with that in a lot of ways. If you don’t hear of Adora Svitak in a very long time, that’s completely fine.