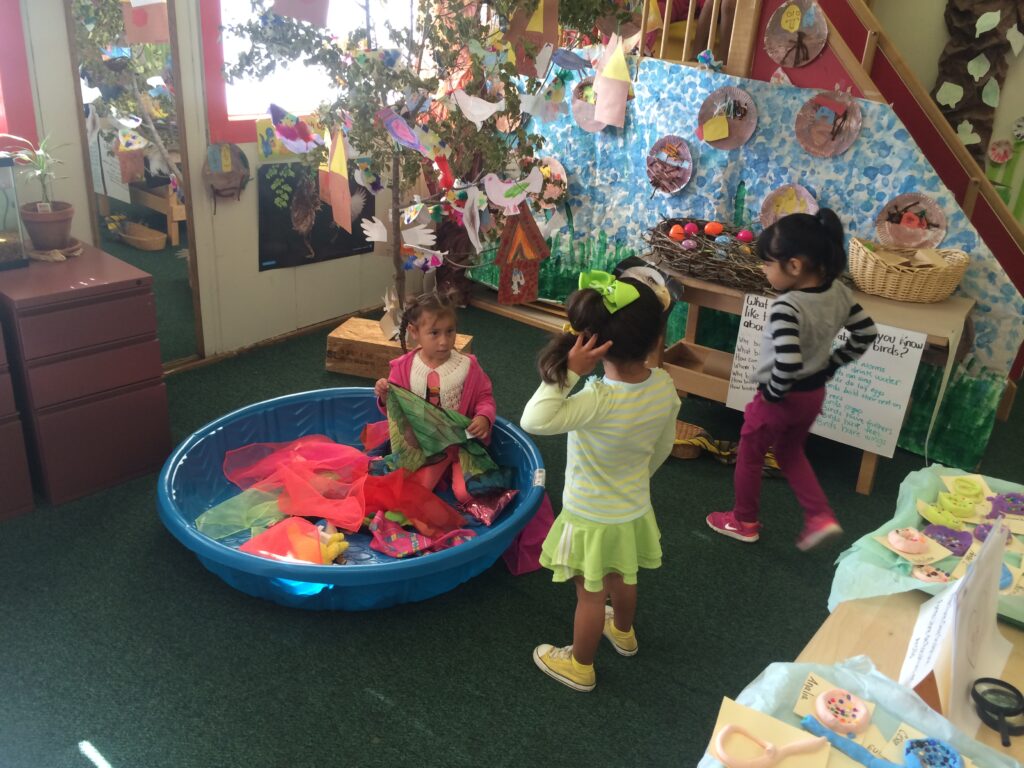 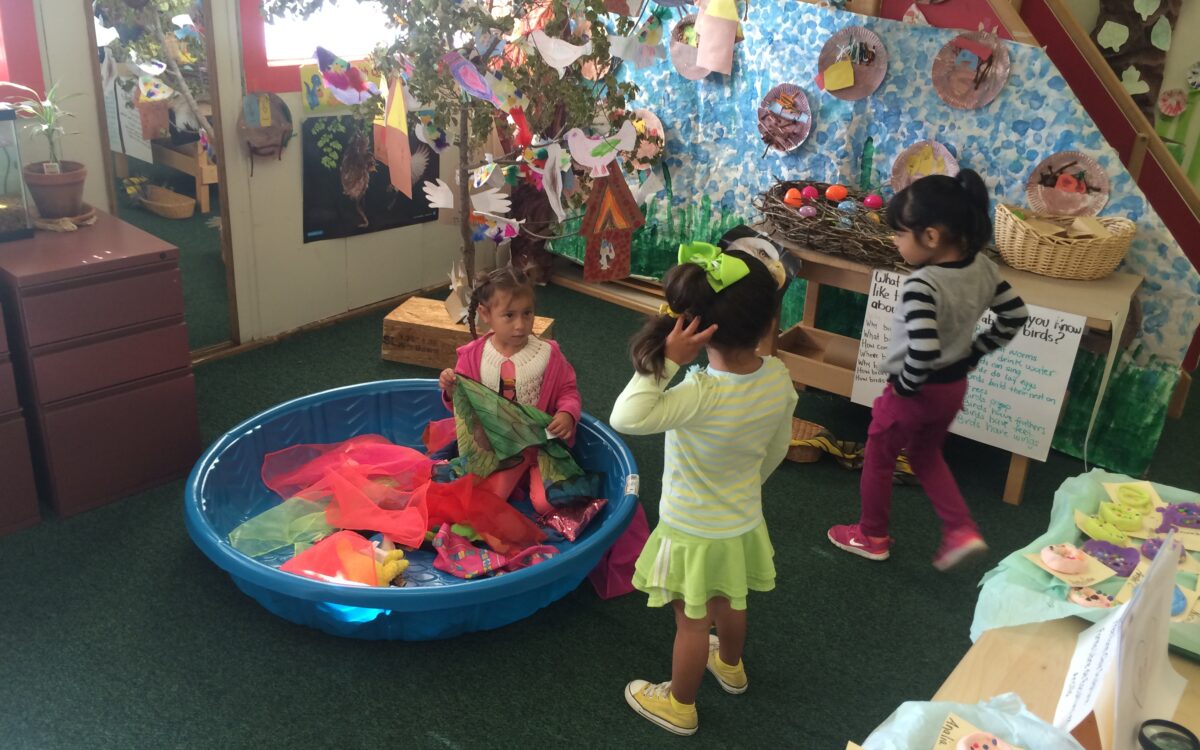 Girls at Apples and Bananas preschool in Santa Rosa play with fabric. The school is moving this summer to make way for construction of a new high school.

Girls at Apples and Bananas preschool in Santa Rosa play with fabric. The school is moving this summer to make way for construction of a new high school.

At Willow Creek State Preschool in Santa Rosa last week, site supervisor Paula Schaefer and one of her teachers organized piles of books, supplies and other classroom items as a construction crew worked nearby.

The city-owned building that houses the preschool needs a new roof and other renovations to accommodate the 48 preschoolers who will attend morning and afternoon sessions when school resumes in August. Repairs are underway, thanks to a one-time building fund that Sonoma County established this year to fix up aging preschool buildings.

Also last week, in neighboring Marin County, an enthusiastic crowd of more than 100 people, including local government and school officials, parents and other supporters of early education, gathered at a movie theater in downtown San Rafael to promote plans for a countywide ballot measure that would raise Marin’s sales tax by ¼ cent to expand preschool access for children from low-income families.

The counties’ contrasting approaches to funding early education programs highlight the efforts of local governments across the state to expand access to preschools.

Gov. Jerry Brown has made it clear that there are limits to his largesse when it comes to early education. In his revised budget last month, Brown proposed funding 2,500 additional part-day slots for preschool students with special needs. But still unserved are large numbers of 3- and 4-year-olds who do not have access to state subsidized preschools.

Brown is preaching fiscal restraint, despite a state budget that is one-third larger than it was during the recession. “I do not want to be caught in the jaws of the persistent fiscal instability of the state of California,” the governor said last month as he unveiled his revised budget for 2015-16 fiscal year.

State lawmakers are pushing legislation that would allocate more funding than Brown is calling for, but there is no certainty that he would sign any bills that call for more funding. That puts the onus on local governments to figure out how they will pay for expanding preschools in their communities.

The Willow Creek preschool, and a dozen others in the county, are funded by the California Department of Education and operated by the nonprofit Community Child Care Council of Sonoma County. Many of those facilities are in need of repairs.

In response to those needs, the county board of supervisors and the First 5 Sonoma County Commission, which is funded by tobacco taxes, agreed last month to create a one-time $655,000 building fund that would renovate preschool facilities so that they could accommodate a bigger share of the county’s preschoolers.

When the work is completed, the county’s preschool facilities will be able to provide space for an additional 600 preschool slots – about the number that were lost during the recession.

At that level, there would be enough slots for about one-third of the 1,900 low-income 3- and 4-year-olds in the county who currently don’t have access to preschools there, said Alfredo Perez, Executive Director of First 5 Sonoma, which helps fund early education programs in the county with money from California’s tobacco tax, which was approved by state voters in 1998.

By contrast, rather than relying on one-time funding, child care advocates in Marin are pushing a sales tax measure that would fund preschool and early education programs for low-income children for nearly a decade.

The goal to provide quality preschool to low-income kids in the county “is doable, but it will take all of us” to make it happen, Marin County Supervisor Judy Arnold said at an event to rally support for a 1/4-cent sales tax to fund early education programs in the county.

In order to pass, the measure would require “yes” votes from at least two-thirds of voters. The tax would fund early education programs in the county for nine years, unless voters supported an extension. Backers of the ballot measure campaign, known as Marin Strong Start, said one selling point of the initiative is that all proceeds from the ¼-cent tax would directly benefit early education in the county – in the same way that county sales taxes have benefited transportation improvements in California counties.

The tax plan won backing from county supervisors a year ago, but in July proponents of the initiative agreed not to put the measure on last November’s ballot. They decided to hold the measure until the 2016 general election after polls showed that voters were not likely to approve both the children’s measure and a second local tax measure on the 2014 ballot, which funded the county’s emergency radio communications.

Marin County’s board of supervisors continues to support the sales tax measure, although changes could be made to the initiative until late summer next year, before the deadline for certifying the measure for the county ballot.

Supervisor Judy Arnold, who attended the event at the Rafael cinema, said the goal of providing quality preschool to low-income kids in the county “is doable, but it will take all of us” to make it happen.

Both Marin and Sonoma counties have pockets of extreme wealth and poverty, and growing Spanish-speaking communities. But Sonoma has the edge on poverty over Marin, in part because of its reliance on low-income labor that helps sustain the wine industry and other industries and businesses related to it.

Sonoma County officials also are seeking philanthropic support to bolster their preschool programs. Last week, they announced a partnership with the Institute for Child Success, a South Carolina nonprofit that is providing the county with technical assistance for up to nine months to develop a data-based model for improving outcomes for 3- and 4-year-olds who now are learning at the remedial level.

If the county offers convincing evidence that the low-performing students could be ready for kindergarten after two years of high-quality preschool, the nonprofit would seek investors to provide money up front to expand preschools. The idea is that students who caught up with their peers and were ready for kindergarten would save the county’s 40 school districts the cost of keeping those same children in remedial and special education programs for many years.

Sonoma County officials also are considering a partnership with the Sonoma County Nurse-Family Partnership program, which provides low-income, first-time mothers and their babies with home visits from registered nurses, Perez said. That program could save the county health care costs.

The changes aimed at creating more access to preschools in the county come with some disruption.

For 22 years, the Apples and Bananas school, operated by the nonprofit Community Child Care Council of Sonoma County, has been a friendly learning place for kids in a Santa Rosa neighborhood. Parents and their children would make a short walk to school.

Come August, Apples and Bananas will move to a new location – in a middle school three miles away. The move is needed to make way for construction of a new high school where the aging preschool portables now stand.

In Marin County, Ethel Seiderman, an early education pioneer and advocate who opened the nonprofit Fairfax-San Anselmo Children’s Center in 1973, was unhappy with the decision last year to postpone the sales tax measure to expand preschools until the 2016 ballot.

Her message to county officials when they consider the measure again in 2016: “Don’t be fickle,” said Seiderman, who is in her 80s. “Don’t dump this for something else. There is always something else.”