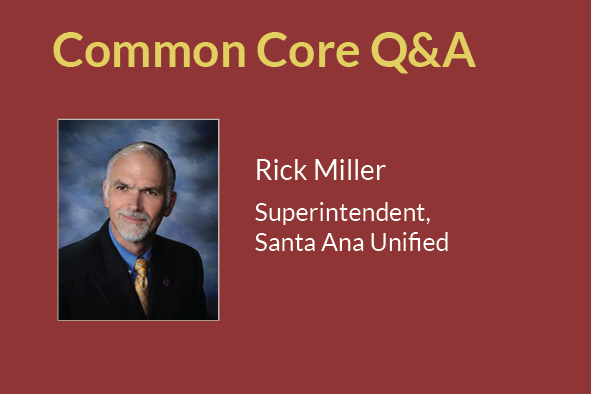 EdSource is conducting a series of interviews featuring educators’ experiences with the Common Core State Standards. Santa Ana Unified is one of six districts that EdSource is following during implementation of the new standards. For more information about the Common Core, check out our guide.

Santa Ana Unified School District Superintendent Rick Miller has been an educator for more than 40 years, having served as an elementary and high school teacher, a university adjunct professor, and as superintendent in other districts in California and in Idaho. He became the Santa Ana district’s superintendent in November of 2013.

The following are edited excerpts from an EdSource interview with Miller about the preparation for the Common Core within his district.

What do you see as the biggest change taking place in your classrooms under the new Common Core standards?

To tell you the truth, a lot of this isn’t that new. California’s standards have been some of the best in the nation. So when you bring along the Common Core standards, I don’t know that there is really that much difference from what we were doing before. Maybe the main difference is that all districts must ensure that every child have the same level of exposure, to have high expectations for success in college and careers. All of us as teachers ought to move into that kind of arena. And I wouldn’t argue with that.

What is your biggest worry?

What is the assessment? We know its name. But how does it actually work? What’s the accountability measure that goes with it? We’ve been having this conversation about the Common Core without knowing the specifics of how we’ll be measuring progress. We have some notions, based on the pilot tests last year, but as of yet, nobody’s actually taken the full and complete test. So until we get there, it’s going to be hard to figure out how best to prepare our students.

Schools in your district are scheduled to start administering the new Common Core-aligned assessments in April.  Given that the tests will be online for the first time, how prepared are their computer systems?

I’ve been concerned about our capacity, both in our own district and throughout California, although I think we’re making progress. There are going to be some surprises as we go forward with the technology part because it’s yet to be figured out.  There are some rural schools that don’t have a lot of Internet capacity, and there are a number of schools where the broadband connections are relatively slow. A number of districts I’ve talked to have what we call a T1 line, which is an Internet line to their schools. A T1 line is 1.54 megabits per second. And at your house if you get like ATT or something like that, you probably have 25 megabits per second. And that pretty much describes our potential problems, at least in some schools. The capacity of some schools is much less than many homes.

A year ago, when SAUSD went through this process with the field tests, about eighty percent of our schools did fine. But there were 20 percent, more or less, where all of a sudden the system froze up, or the screens went blank, or there were other technical problems.  There were calls to the State Assessment Support Center, and as it turned out, others were having the same problem. When you put something together that’s new, it’s going to take you a little bit of time to figure out how it really works.

Are your schools in good shape as far as curriculum?

I think we’re just fine with all that because I think that the primary instructional tool in the classroom is the teacher. The teacher takes care of making sure that the materials align to the standards being taught. In other words, if you and I are teaching an algebra class, and they give us three different books, or even 10 different books to choose from, we’ll choose one or another way, and because we’re good teachers, we’re going to still teach that quadratic equation, right?

How much opposition are you seeing in your district?

I’ve certainly heard about it. A lot of it seems to be politically driven. And that’s very problematic. Because a lot of people still aren’t sure what the new standards really represent. And when we engage in a political debate about something that nobody can define on either side, then we’ve got the makings for a real bonfire.

How well-equipped are your schools to invest the necessary resources to implement the new standards?

What has certainly complicated the issue is that we were going into a recession just as the Common Core started. Our budgets went into a major decline, and now we’re in many ways into a period of just trying to restore some things, much less get to an adequate level of funding and support and so forth that allows us to do what we need to do. Does that complicate and make things more difficult?  Yes. It is what it is, and we’re doing our best. SAUSD has good teachers, so I think we’ll be fine.