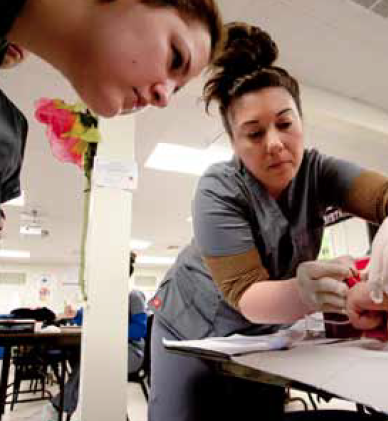 With the winner’s circle set on the state’s multimillion-dollar grant program to expand career education, grant recipients must now get down to work to keep their promises.

The winners of the California Career Pathways Trust laid out some ambitious goals for the money. The $250 million fund is believed to be the largest investment in the nation to expand education programs that give students hands-on work experience on their path to graduation.

Grants were awarded to 39 partner groups that pledged to create stronger links between schools, community colleges and businesses to better prepare students for jobs that are in high demand in local economies. The one-time, competitive grants were awarded in three categories: up to $15 million, up to $6 million and up to $600,000.

All told, the state handed out $248 million under the fund, with the remaining money to be distributed later in a manner yet to be determined, state officials said.

Such connections between education and business are seen as vital to ensuring that what students learn in the classroom is relevant to skills needed in college and careers. Many of the programs follow a linked learning approach, which typically offers a multi-year high school program in which career themes are integrated throughout the academic work and culminate in an internship or other job experience in a student’s senior year. Students participate in a small learning environment with close relationships with teachers and receive individualized attention and support throughout their high school years.

“We’ve worked on minor projects, but certainly not to this degree,” said Tiffany Morse, director of career education in the Ventura County Office of Education, a member a regional consortium that won a $13.2 million grant, among the largest offered. “We have a new age in education of collaboration and we are really taking that to heart. That seemed to be one of the main focuses of this grant, to collaborate across silos.”

“This is the largest-scale collaboration of this kind” in Ventura County, Morse said.

In five years, the partnership aims to greatly expand the number of pathways available to the region’s students, setting a goal of serving more than 35,000 students in 62 career pathway programs.

One pathway being launched this fall will introduce students to careers in aviation through a partnership with the Career Education Center at the Ventura County Office of Education and Channel Islands Aviation, which runs a flight school and provides other services at the Camarillo Airport. The two-year Air Academy will allow students to learn how to build and fly unmanned aerial vehicles – or drones – as well as complete flight ground school to learn the basics of aviation. Upon completing the pathway, students will be eligible to take a certification exam, which would apply toward a pilot’s license.

“As far as I know, we’re the only ones with a UAV (unmanned aerial vehicle) curriculum statewide,” Morse said.

Business leaders will work closely with educators to ensure that pathways are being developed to meet workforce needs, and each pathway will include at least one work-based experience for students.

Other major grant recipients have laid out equally ambitious proposals:

Los Angeles Unified received $15 million for its proposal targeting high-growth Southern California industries, such as medical technology and environmental resources. Educational partners include the nearby Centinela Valley Unified High School District as well as nine community colleges in the area. Businesses in the partnership include the Boeing Company, Kaiser Permanente, Tyson Foods and the Southern California Gas Company.

Officials hope that the strength of those collaborations will keep the pathway programs going long after the grant runs out. Grant applicants had to build out five-year budgets to show how the programs would be sustained.

“We’re trying to build something that works, so that each district or school will be able to pay into it and keep it going,” said Karen Engel, interim director of development for the Peralta Community College District.

The Peralta consortium hopes to boost the number of pathway programs in the region it serves to 55, up from 33, and increase student participation from 12,000 to 18,000.

Interest in the grant was so keen – the state Department of Education received 123 grant applications, asking for about $709 million in total funding – that Steinberg is working to secure an additional $300 million for a similar grant next year.

Research suggests that students who participate in linked learning programs have higher graduation rates than peers in traditional high school programs and are more likely to be on track to take more of the courses required for admission to the state’s four-year universities.

However, a February study of nine districts participating in the California Linked Learning District Initiative was less clear on whether the programs raised standardized test scores. The study, by research firm SRI International, said that scores on tests varied greatly across districts, without any consistent results between the students in pathways and those in traditional programs.

The grant program will also do little to settle debates over the future of career technical education in California. Advocates fear that career programs – especially regional occupational programs, which are expensive to run and maintain – will lose ground under the state’s new funding plan for schools, the Local Control Funding Formula. The funding plan eliminates mandated, or categorical, spending on career technical education and instead gives districts leeway to spend state money as they see fit. Others argue, however, that the Career Pathways Trust is evidence of a stronger focus on academically rigorous linked learning and career pathway programs that will better prepare students for college and careers.

Still, state Assemblyman Al Muratsuchi, D-Torrance, wants to restore $384 million to career technical education in the state budget. He has also introduced legislation that would protect funding for regional occupational centers, which provide job training to help students enter the workforce directly out of high school.

The Career Pathways Trust is “a step in the right direction,” Muratsuchi, who chairs the Assembly Budget Subcommittee on Education Finance, said in a statement. But he said the money wouldn’t replace the need for dedicated funding for career technical education programs.

Michelle Maitre covers career and college readiness. Contact her at mmaitre@edsource.org and follow her on Twitter @michelle_maitre. Sign up here for a no-cost online subscription to EdSource Today for reports from the largest education reporting team in California.