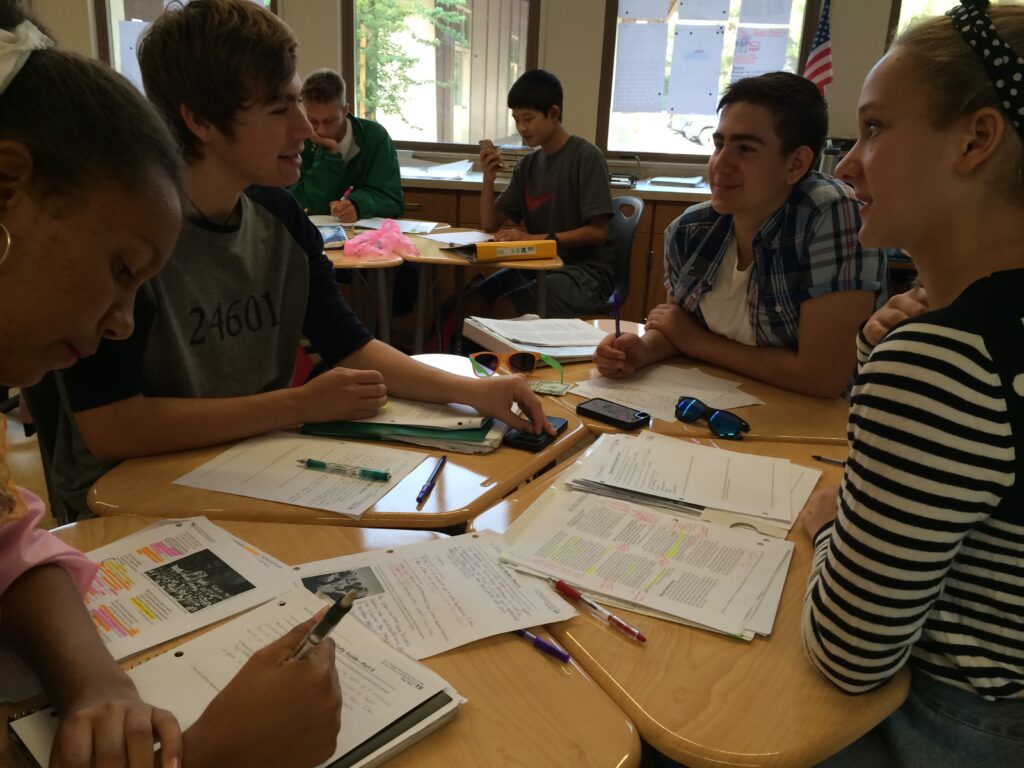 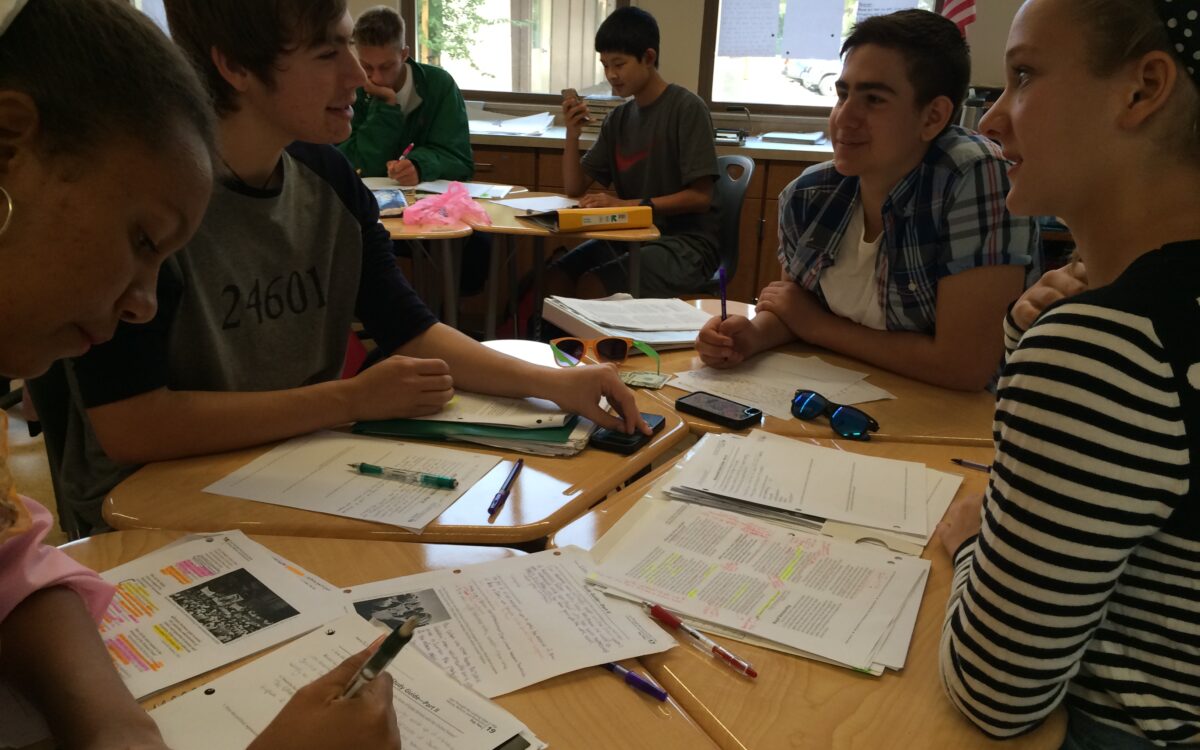 The document reads like an outline for the television series “Homeland,” which is about the Central Intelligence Agency. It is a real CIA cable from the island of Cyprus to “Headquarters” in June 1953, and it describes a CIA plan to push elected Iranian Prime Minister Mohammed Mossadegh out of power.

A copy of the plan was handed out to students at Palo Alto High School as part of the new social justice history class for sophomores. The three-year course spans history and English Language Arts and uses primary sources, such as the CIA document, to fulfill one of several requirements of the new Common Core State Standards.

Schools in Gilroy, Salinas and Pleasanton have incorporated social justice materials into their curriculum. A senior English class at Foothill High School in Pleasanton, for example, is reading material from the anti-discrimination curriculum, Teaching Tolerance, according to teacher Amy Vandagriff.

Many teachers in the past have taught students how to analyze information, debate different points of view and use primary documents to justify their positions. The difference under Common Core is that such standards are now spelled out as essential for students to succeed in college and in life.

History teacher Eric Bloom and English Language Arts teacher Erin Angell created the class at Palo Alto High School specifically to be aligned with the Common Core. But they are taking their students further than the standards encourage. For example, students are investigating and defining what justice and injustice mean to them. Each student will wrap up the three-year commitment by putting their learning into practice by volunteering in the community.

So how is a CIA document leading students on the path of learning about social justice? The answer lies in their reactions to learning about the U.S. intelligence agency’s activities to oust a moderate, democratically elected ruler in another country.

“That’s interesting; are they allowed to do this?” asked one student, after her group read aloud the section advising a $35,000 payment to the CIA’s preferred new leader, General Fazlollah Zahedi. The document also suggests that the American ambassador “assure” the Shah of Iran, who opposed Mossadegh, that the United States and Britain have common goals in order to lessen the Shah’s “pathological fear of British intrigues against him.”

“That’s sneaky and manipulative,” said another student, Nicole Li. “So they want to support the Shah and not Mossadegh, which doesn’t sound very American, because the U.S. is all about democracy,” she added.

The lesson in Bloom’s class asks students to examine government documents, including a 1952 National Security Council report that states that if Mossadegh remained in power, it would likely result in a Soviet Communist expansion into Iran, and the United States losing access to Iran’s oil.

Student groups in the earlier part of the class had hashed out some of the historical underpinnings. “What do you think about Mossadegh?” Ayah Chakamkchi asked her group, then said, “He wanted to nationalize the oil.” She looked at her handout and added, ”Every issue started by outside sources.”

Students also analyzed the installation of the Ayatollah Khomeini in 1979. In answer to a question about what the Ayatollah’s rule represented, Joshua Donelly-Higgins said, “He developed the idea of an Islamic government, similar to ISIS. Islam goes above everything else.”

Bloom is a tall, boisterous man with dark hair who talks with his hands. In keeping with the Common Core, he is more of an outside observer and listener. He moves around the classroom from group to group, volleying questions when there’s a lull in conversation to keep discussion going.

When he sees a student tripped up by a word in the CIA document, Bloom, like a quiz master laying down clues, offers: “Think about Iran’s history; what do they want in place?”

The 30 students who have signed up for the three-year program are committed to attending Bloom’s morning history class and Angell’s afternoon English class six hours a week. During the classes the students talked to a reporter about their courses.

“The idea that I could grow up to do something in the world and that this class could help me was very, very appealing to me,” said Nadia Leinhos, a student in the class.

“I’ve been in group talks before but they’ve never been like this, where we have so much opportunity to show what we think,” said Yotam Ponte, a boy with straight dark hair.

Nadia Leinhos, who has sparkly eyes and a broad smile, said she wanted to be an actress and was eager to become more skilled in public speaking. But she also likes that a high school class could help her develop ways to make a difference in the world. “The idea that I could grow up to do something in the world and that this class could help me was very, very appealing to me,” she says.

After they debate and discuss the questions that came up in Bloom’s class and have lunch, the students file into Angell’s English class. Right away Angell, who responds to student comments with incisive questions, asks them to recount the significance of the work they did in Bloom’s class that day. After that, she shows a segment from “The Daily Show” in which host Jon Stewart recounts the recent release in New York of a man who served 30 years in prison for a murder he didn’t commit.

“How can this happen?“ Stewart asks his guest, Bryan Stevenson, the author of “Just Mercy,” about mass incarceration in the United States. “I think we don’t appreciate that we have to be just in all circumstances; there’s this disconnect,” Stevenson says.

As in Bloom’s class, Angell assigns students exercises where they work out answers in lively group discussions. They’ve studied ancient Greek philosophers and other luminaries. To understand how well they’ve absorbed theories of injustice posited by Plato, Kant and other philosophers, for example, Angell adds a twist: She hands out a narrative by Malcolm X and asks them to ask themselves: “If I were Kant, would I think this is an example of injustice,” she says, pressing her hands together for emphasis.

The narrative is an excerpt from a speech by Malcolm X in which he describes how his school adviser tried to steer him away from pursuing a career as a lawyer because of his race.

The students will spend a lot of time together in classrooms, talking and ferreting out the meaning of justice and injustice. Ultimately, the painstaking inquiry will lead them out into the community.

“If you want to develop kids who are aware of themselves, they have to understand and be able to identify justice,” said Maureen Costello, director of Teaching Tolerance, a program of the Southern Poverty Law Center. “They have to be able to recognize stereotypes and have a sense that injustice comes about because of stereotypes and group identity.”

Palo Alto High School students have logged impressive amounts of community service over the years, but the vast majority of them felt the work was not meaningful, Angell said. She and Bloom thought the social justice program would help them make more of a contribution.

“If you want to develop kids who are aware of themselves, they have to understand and be able to identify justice,” said Maureen Costello, director of Teaching Tolerance, a program of the Montgomery, Alabama-based Southern Poverty Law Center. “They have to be able to recognize stereotypes and have a sense that injustice comes about because of stereotypes and group identity.” The center has developed and disseminated Common Core-aligned social justice curriculum at schools across the nation.

In Angell’s class, students also have been reading the graphic novel “Persepolis: The Story of a Childhood” by Marjane Satrapi. Through the lens of a young girl growing up with leftist parents, it details the rapid changes in Iran after the 1979 revolution, which put religious leaders at the helm of the country. In a recent chapter that students read, the protagonist relates how family friends are released from prison, where they have been tortured.

“And the narrator is a little girl,” said Nadia, “And this is how she thinks about things and often it’s quite shocking. She’ll go over to play with friends and say ‘this is a game we’re going to play and whoever loses gets tortured,'” she said reflectively. “This is what this does to kids.”