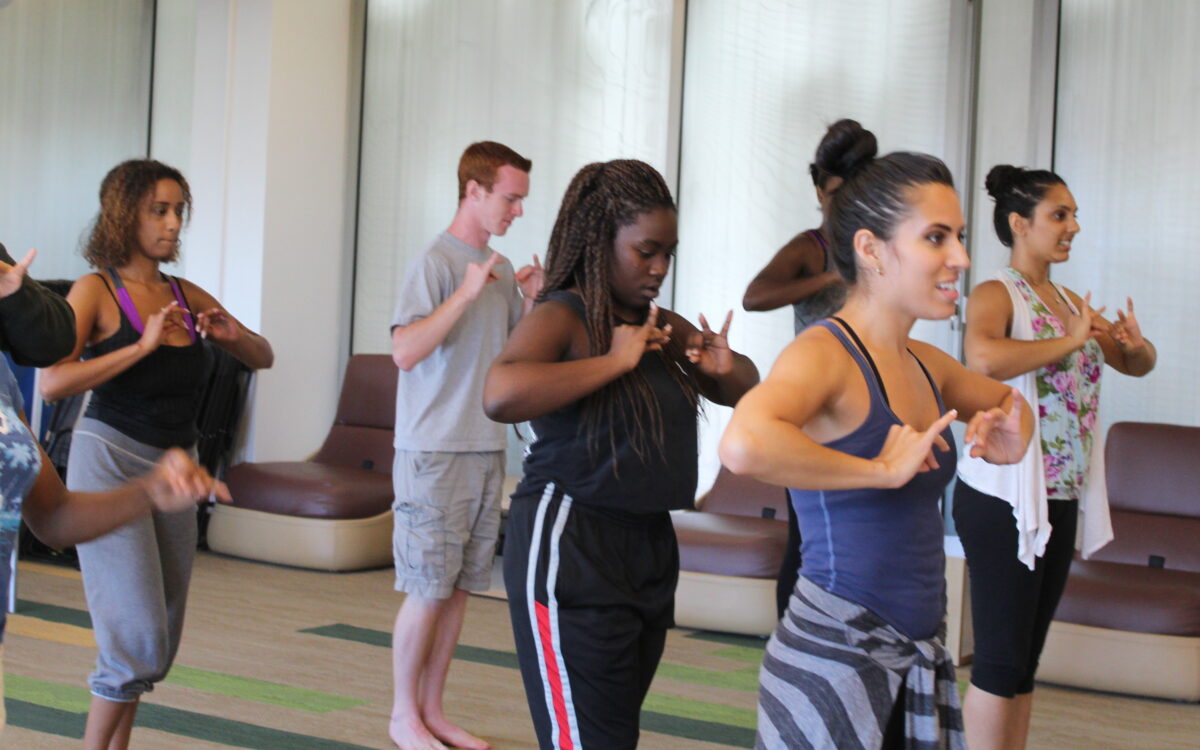 Credit: Susan Frey/EdSource Today
A dance class is part of the extracurricular offerings at the First Star Academy for foster youth at UCLA.

Credit: Susan Frey/EdSource Today
A dance class is part of the extracurricular offerings at the First Star Academy for foster youth at UCLA.

Instability — multiple homes and multiple schools — is one of the biggest obstacles to academic success for foster children. But about two dozen high school students in foster care in Southern California are benefiting from one constant in their lives: a program each summer at UCLA aimed at keeping them on track academically and preparing them for college.

The First Star Academy is a pilot program for foster youth run by First Star, a national nonprofit based in Washington, D.C., that focuses on helping abused and neglected children. For the past four years, the First Star Academy has brought the foster students to the UCLA campus each summer and meets with the students one Saturday each month during the school year.

When students in foster care change schools, they often lose credits or miss out on opportunities to take crucial classes. During the First Star summer program, the students make up those course credits as well as credits for classes where they have received low grades. At the same time, they get a taste of college life, obtain help with college admissions, and meet successful adults who were once in foster care. They work in paid internships and learn a variety of life skills, from balancing a checkbook to handling stress through meditation.

This will be the last summer for the 25 students, all from districts in Los Angeles or Riverside counties, who began the program together as incoming 9th graders and will be returning to school in the fall as seniors. The first summer the program included 30 students, but three have dropped out and two are still in the program but couldn’t attend this summer.

The First Star Academy has become more than a place that provides help with practical skills and academics. It has given the students a sense of belonging most of them have never had.

“Feeling safe and a sense of family is definitely one of the most important things about this program,” said Sarah, 17, who during the first summer felt comfortable enough to reveal to the other students abuse she had suffered – something she had never told anyone.

“But the biggest thing that I got out of this program was learning who I was, who I could become, and seeing life from a whole new perspective,” she said. The juvenile dependency court and students have given permission for the media to publish their photos and first names only.

When Sarah was 12, she found her mother dead on Christmas morning because a prescription patch she wore to control pain accidentally overdosed her. At first Sarah was sent to live with her father. When that didn’t work out, she ended up in foster care.

“I had a rough start in high school,” said Sarah, who has long blonde hair and wears bright blue-framed glasses. “I had the wrong placement, but nobody cared about me. I wasn’t getting the right help, and I wasn’t in the right state of mind. I was emotionally wrecked.”

Now a high school senior, Sarah is on track to graduate and plans to attend college, with the goal of becoming a lawyer and working on behalf of abused children. She has already dabbled in public speaking, discussing her experiences and foster students’ need for committed education advocates at a recent dinner in Los Angeles hosted by the Alliance for Children’s Rights.

“The biggest thing that I got out of this program was learning who I was, who I could become, and seeing life from a whole new perspective,” said Sarah, 17, a foster student in the First Star Academy.

The First Star Academy is aimed at changing the disheartening statistics for foster youth like Sarah, who have to fend for themselves after they turn 18. In California, foster youth are the most likely to drop out of school and the least likely to graduate, according to a report by The Center for the Future of Teaching and Learning at West Ed. Almost two-thirds of boys and nearly one-third of girls spent at least one night in jail after they left the foster care system, according to a study of Midwest foster youth by researchers at the University of Chicago. Nationally, only about 3 percent of foster youth complete a bachelor’s degree before they are 25, according to Casey Family Programs. Many also become victims of sexual predators. Sixty percent of child sex-trafficking victims who were rescued in 2013 during an FBI operation in 72 cities had previously been in foster care, according to a report by the Center for American Progress.

Peter Samuelson, a teacher and Hollywood producer, co-founded First Star in 1999 with Washington lawyer and lifelong child advocate Sherry Quirk. The idea to create summer academies is based on a concept developed by board member Kathleen Kelley Reardon while she was researching her 2009 book, “Childhood Denied,” about foster children. Samuelson said Reardon called him one morning saying she had been up all night with the “big idea” of putting high school students – who typically are the most difficult to place with foster families – on a university campus, providing access to a community of experts and potential mentors.

“It was a huge idea,” Samuelson said, “but we couldn’t believe it hadn’t been done before.” He hired two graduate students to research whether such a program existed. When they found it didn’t, the First Star Academy was launched.

The program hires former foster students, such as Matthew Hartman, 20, as peer mentors. Hartman, who has a wiry build and short red hair, was born addicted to drugs and entered the foster care system as a baby. He is now in his senior year at UCLA and is thinking of going to law school and focusing on education law.

“I know from my experience that a program like this would have been beneficial for me,” Hartman said. “That drew me to it. I can show the students that you can be successful and go to a good college.”

One of the students in the program, Kenny, 17, said the peer mentors are like older brothers and sisters.

“They inspire us and push us forward,” said Kenny, who wears a lion’s tooth necklace from Africa, a family heirloom. He entered the foster care system when his mother became comatose after his birth.

“The peer mentors help us set goals and choose the right pathway to go down,” he said. “They’re our role models.”

The program also recognizes that finding that pathway and breaking old habits is particularly difficult for students who do not have a support system.

“We are about tough love,” she said. “But if you go off the path, we’re there for you like parents or caregivers. We’ve gone to court to advocate for students who have gotten into trouble. If they keep violating the rules, we have to let them go. But they always have a chance to come back.”

Deandre, 18, is testimony to the program’s tenacity.

The first summer he was kicked out of the program for doing drugs, he said. “I felt like they didn’t care, but then they encouraged me to come back.” The second summer, Deandre got kicked out again.

But the program staff told him they still wanted him to keep trying.

“That made me realize that this is like a second family for me,” Deandre said. “They never gave up on me like everyone else did.”

When Deandre was forced to leave, Harven said staff members talked with him about the situation, helping him process his thoughts and feelings. They also called him regularly. “We made sure he knew we cared about him,” Harven said.

Now, she said, Deandre, a tall, husky young man who is on his school’s football team, has totally turned around. “He has a presence,” she said. “He is definitely a leader.”

The program has also helped Deandre find his passion. He is currently working as an intern in the IT department at UCLA. He has enjoyed the job so much that he wants to pursue a career in IT, he said.

Deandre, who has six siblings, has been in the foster care system since he was 5 years old. He said he lived in multiple foster homes before his grandmother took him in when he was 7. His sister, Andrea, 17, is also in the First Star program. Their younger sister, who is entering 9th grade, is part of a second cohort of students who began the program this summer at UCLA.

The first cohort of Los Angeles students will be the first test of the program’s innovative approach, said Samuelson, who is president of First Star. In 2012, a program started at the University of Rhode Island, and in 2013 two others began, one at George Washington University in Washington, D.C., and one at the University of Connecticut. Next year, several additional universities will be starting programs on their campuses, including Pepperdine. The goal is to have 100 programs in 10 years.

Kenny said he does not feel any pressure about being in the first group. “I’m honored to be part of the first cohort,” he said. “We set the traditions, such as the talent show and prom and volunteering for Christmas in July (a benefit for low-income people). We set the standards. They’re going to follow in our footsteps.”

Samuelson hopes the success of the program will prod government agencies to follow the nonprofit’s lead and use First Star’s approach to educating foster youth on a year-round basis.

“We expect it to be recognized as a transformational program,” he said. “By the end of this program, we want to have stubborn, smart, self-advocating, aware and ambitious people. Foster kids have had failure inflicted on them so many times because people give up too soon.”