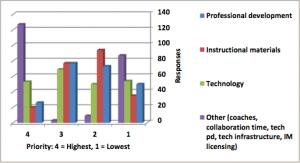 More than half the California school districts surveyed by an education advocacy group said they’ve spent all or most of the funds set aside to implement Common Core State Standards, but still have more to do to prepare for the new academic standards.

About 25 percent of districts responded to the survey by the Association of California School Administrators, which represents state superintendents, principals and other school leaders. Of those who responded, the highest priority for new funding is to provide teachers with professional development in technology.

“Professional development seems today to be incredibly more important than it ever has been,” said Marc Ecker, president of the association and superintendent of the Fountain Valley School District in Orange County, during a call with reporters Tuesday, when the survey was released. “With all the changes in technology, with the Common Core State Standards and with moves for differentiated instruction, the need to train new and veteran teachers on an entirely different approach using 21st century operating systems, so to speak, is challenging.”

California is one of 44 states that have adopted the new Common Core standards in math and English, which generally focus less on having students memorize facts and more on teaching them critical thinking and analysis skills that will serve them in college and in their jobs.

Districts that responded to the survey also cited a need for coaches to work with teachers and staff, time for teachers to work collaboratively, better bandwidth and computers that can handle more data. They also said they need money for licensing software that provides instructional techniques, strategies and materials for Common Core lessons.

Administrators association members are putting their might behind a campaign called the One Voice for Students initiative to press for more funding and other policy changes. It calls on the Legislature and Gov. Jerry Brown to approve two additional one-time Common Core implementation funds – one for professional development and instructional materials and one specifically targeted at ensuring that districts have enough new computers and Internet capacity for all students.

During the final budget negotiations last year, Brown agreed to a one-time $1.25 billion grant for schools – about $200 per student – to spend on professional development, technology and resources to prepare for Common Core standards.

California spent at least twice as much to put the state’s previous academic standards into classrooms, and those didn’t require nearly as much technology as Common Core standards do, said Wes Smith, executive director of the Association of California School Administrators.

“That was in the economy of the 90s,” Smith said. “Here we are in 2014 and received $1.25 billion, and while we’re grateful for that, we believe that the investment must be much stronger than that, and the data that we have in our survey certainly supports that.”

Assemblywoman Susan Bonilla, D-Concord, introduced Assembly Bill 2319 to provide some of that additional money.  As EdSource Today reported, Bonilla is seeking another $1.5 billion.