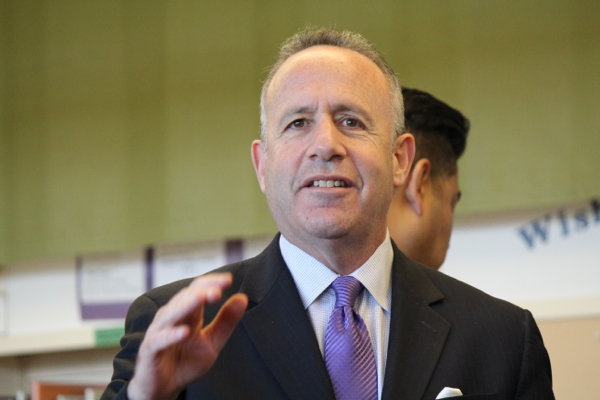 A bill that would make public pre-kindergarten available at no charge to children from California’s lowest-income families passed the state Senate today and heads to the Assembly for debate there.

First introduced with much fanfare in January, SB 837 expands the pre-kindergarten program known as transitional kindergarten. It has been touted as a top priority by Senate President Pro Tem Darrell Steinberg despite little interest on the part of Gov. Jerry Brown.

“This is at the top of the list. I can’t think of anything more important,” Steinberg, D-Sacramento, said at a news conference announcing the new bill in January.

“This pared down version of the original bill would still cover one half of the 4-year-olds in California, because half of them are low-income,” Steinberg told the Senate during debate today.

Under the new guidelines, 234,000 children are expected to qualify for the program each year, double the current program enrollment. The expanded transitional kindergarten program, to be re-named “California Pre-Kindergarten Program,” is the largest part of a Senate budget proposal that would increase spending on early education every year for the next five years. The existing California State Preschool Program, which serves 3- and 4-year-olds from families making up to 70 percent of the state median income (an annual income of $52,959 for a family of four), would also be expanded under the proposal. Child care vouchers for low-income working families would also increase.  In the first year of the five-year rollout, the Senate’s “Fair Start” budget proposal would cost $378 million.

Senator Bob Huff, R-Diamond Bar, spoke out against the proposal today, saying the state did not have enough money to experiment with new programs that may or may not increase academic success for students from low-income families. California should spend its limited capital on existing K-12 initiatives, he said.

“I would say this isn’t the highest priority if you want to be data driven,” said Huff, who was out-voted.

The bill, which supporters hope will become a trailer bill to a state budget containing increased spending for early childhood education, now heads to the Assembly.

Education budget subcommittees in both houses have already approved the spending increases that would be needed to fund the new pre-kindergarten program. It will now be up to lawmakers to negotiate with Brown whether the proposed increases in early childhood spending will be included in the final budget. So far, the governor has given no indication he intends to increase early childhood spending.