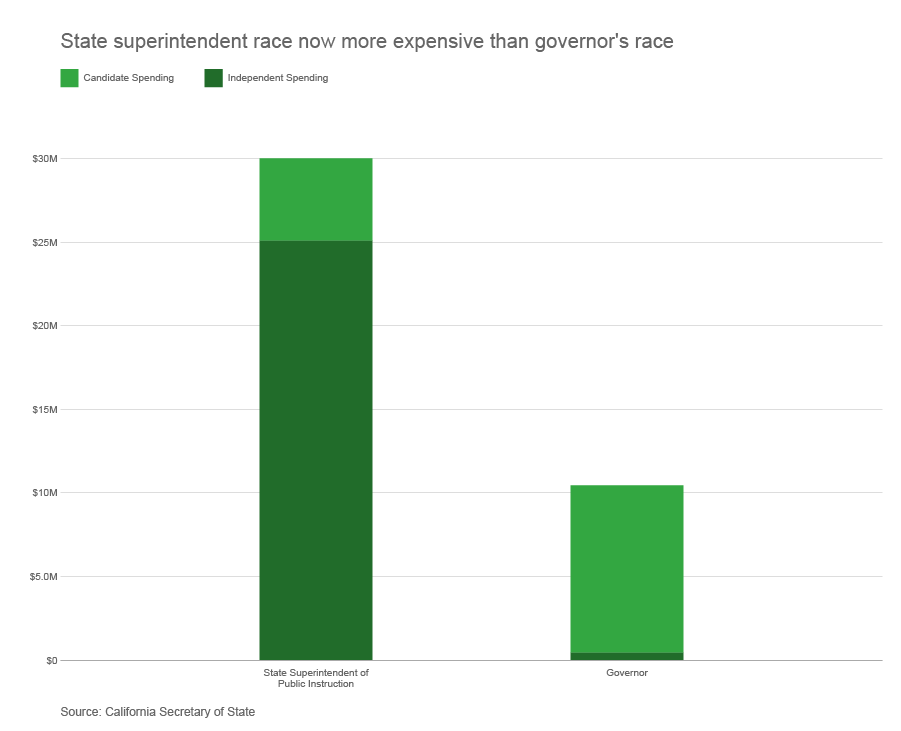 The race between incumbent Tom Torlakson and challenger Marshall Tuck has generated a combined $30 million in spending by the candidates and outside groups compared to $10.1 million in spending in the governor’s race between incumbent Democrat Jerry Brown and his GOP challenger Neel Kashkari. In the nonpartisan race for superintendent of public instruction, both Torlakson and Brown started raising and spending money in 2011. Tuck began fundraising in 2013.

While Tuck and Torlakson have spent $4.9 million in direct contributions to their campaigns, as of the latest disclosure period, which ended Oct. 18, outside groups have spent the greatest share of the funds pouring into the race. They have spent a total of $25.1 million to date (data updates daily), with $6 million of that spent in the past week alone.

In the governor’s race, most of the spending has come from the candidate committees themselves, with Brown spending $4.1 million and Kashkari spending $6.2 million. And of the money Brown has spent, $3.4 million of it went to his “Yes on Props 1 and 2” committee. Money from outside groups, including independent expenditure committees, only makes up $453,000 in Brown’s race.

However, Brown has raised about $20 million since he started fundraising three years ago, and he also transferred about $5 million from his 2010 campaign committee. He currently has $21 million in cash while Kashkari has about $841,000.

The Money Behind the Race

Want to get the details on the money behind the State Superintendent of Public Instruction race? Check out EdSource’s app. Click here.

One big difference between the two races is that polls show that Brown is virtually assured of victory, while polls show support for Torlakson and Tuck is nearly even, with large numbers of voters are still undecided.

A Field Poll released today shows  Torlakson and Tuck in a dead heat with 28 percent supporting each candidate, with 44 percent undecided. By contrast, in the governor’s race, Brown is 21 percentage points ahead of Kashkari.

Unions supporting Torlakson, such as the California Teachers Association and the California State Council of Service Employees, have spent a total of $13.6 million in independent expenditures supporting his candidacy, while also spending $6.9 million on issue advocacy ads highlighting Torlakson’s achievements. In addition, they have spent a total of $2.8 million to underwrite ads opposing Tuck.

Wealthy contributors, such as tech investor Arthur Rock and Eli Broad, who has been a prominent supporter of education reform in California, have spent $11.2 million in support of Tuck.

According to an EdSource review, spending on this year’s race far outpaces those of others over the past dozen years. In 2010, when Torlakson ran against Larry Aceves, contributions amounted to $7.2 million from all sources.  In 2006, when Jack O’Connell, the incumbent at the time, ran and won easily in the primary, total spending was $1.7 million.  In 2002, when O’Connell ran for the first time against Katherine H. Smith, total spending was $5.7 million.

Check out EdSource’s campaign finance app for more details on the money behind the state superintendent of public instruction race.