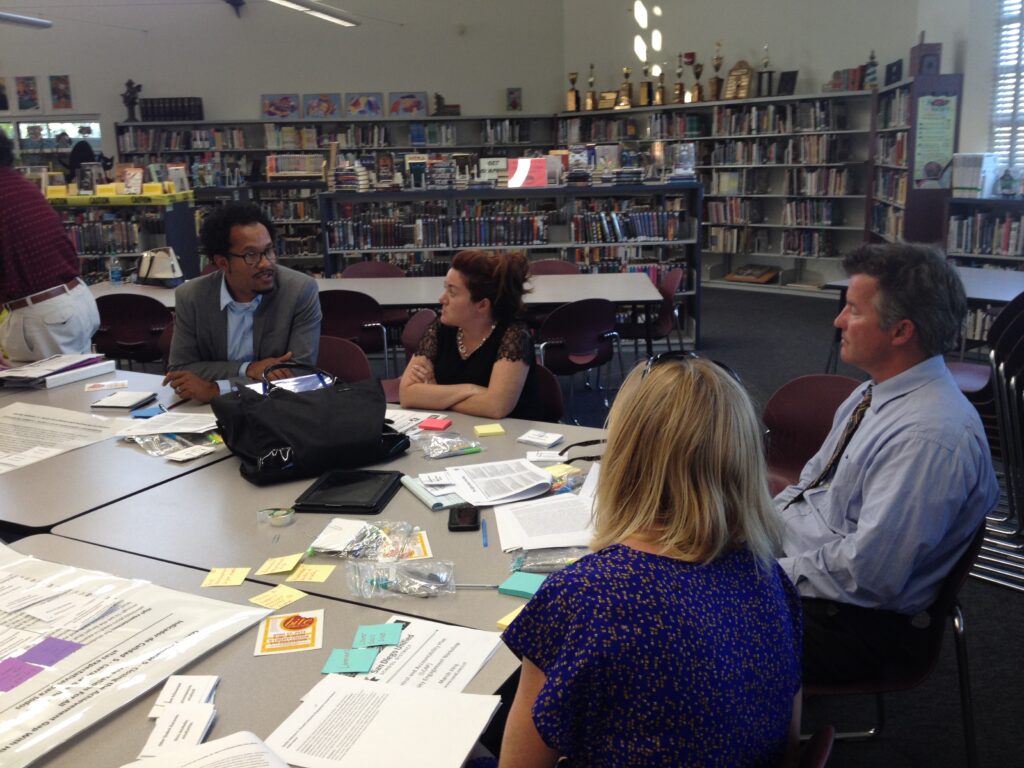 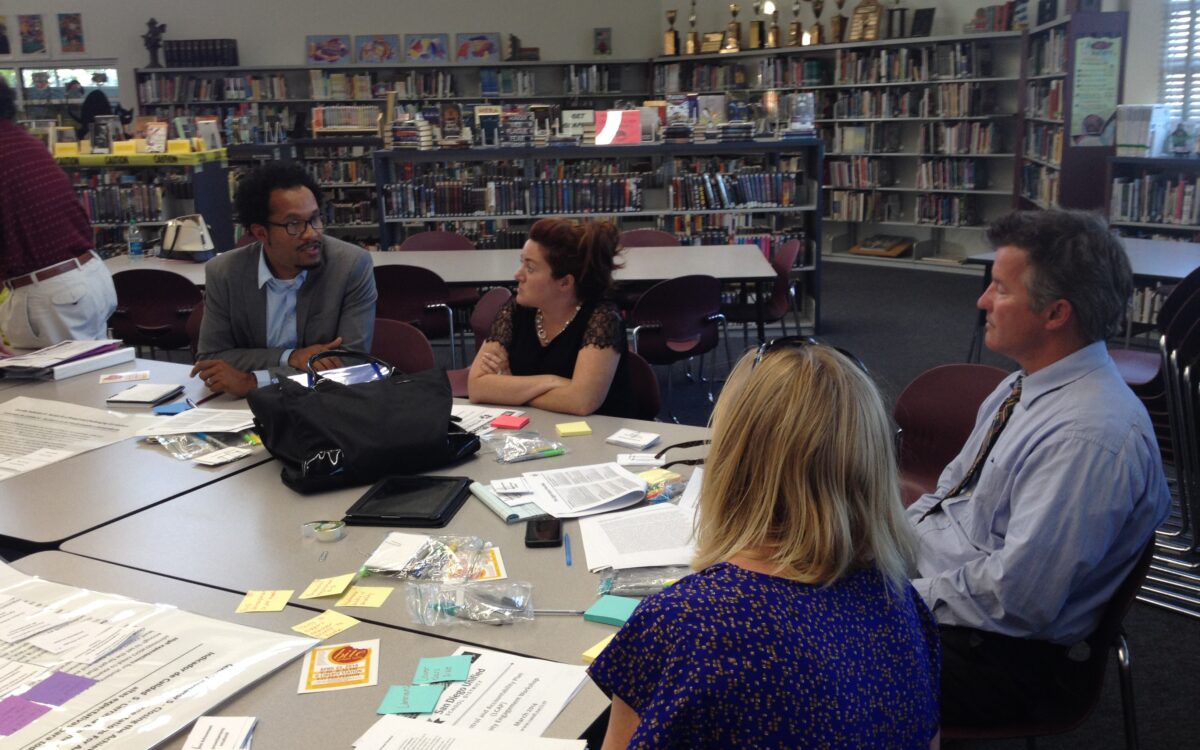 The district had already methodically charted a course for San Diego Unified’s 130,000 students in 2009. The strategic plan, called Vision 2020, included specific goals that mirrored and, in some cases, augmented the state’s new funding plan requirements. Community conversations, a hallmark of the state’s accountability planning process, were already being held about the challenges and triumphs of California’s second-largest school district.

However, with San Diego Unified board members poised to approve the state-mandated school funding proposal June 24, parents and community advocates are still prodding district officials for more details about the Local Control and Accountability Plan (LCAP). After reviewing the latest draft of the accountability plan last week, they still seek a clearer understanding of how merging the district’s vision and this new proposal will help all San Diego Unified students arrive at the finish line as winners – high school graduates who are ready for college or the workplace.

At the same time, there has been little public criticism regarding San Diego Unified’s goals or strategies. One school of thought is that San Diegans, apparently supportive of the district’s strategic plan, were pleased to see the state-required proposal adopt those same principles. Still others believe the lack of transparency and basic comprehension about the new accountability plan has left much of the community in the dark.

Moises Aguirre, San Diego Unified’s executive director of district relations, said both assessments about the lack of stakeholder feedback hold some truth. He said some people, “broadly speaking,” understand the district’s educational priorities, while others are indeed looking for more specifics.

“I think that obviously there are multiple demands on the plan itself,” Aguirre said, noting that in addition to addressing the concerns of community stakeholders and employees, the district is responding to guidance from the state Department of Education and the San Diego County Office of Education, which must sign off on the proposal. “We’re trying to be responsive. But there’s only so much money to go around to support our students.”

Using data as a ‘flashlight’

The new funding formula allocates additional money for high-needs students. But the formula wasn’t a windfall for San Diego Unified, which is hard to explain to a community that anticipated more money when voters passed Proposition 30 in 2012. The ballot initiative, which aims to restore education funding to 2007-08 levels, merely stopped the district’s financial hemorrhaging.

For 2014-15, San Diego Unified is projecting a $106.4 million shortfall – the majority of which is expected to be covered by $64 million in one-time real estate sales and $28.6 million in additional LCFF funds.

The district, which is in the midst of “right-sizing” the school system through early-retirement incentives and “strategic staffing” that required schools to reduce their staff at each school by one teaching position this fall, also is projecting deficits in excess of $60 million for both 2015-16 and 2016-17.

For 2014-15, San Diego Unified did receive a $31.3 million increase in state funds to enhance services for high-needs students, bringing that budget total to $51.7 million. (About 63 percent of the district’s students are identified as high-needs youth.)

Regardless of San Diego’s financial outlook, the district is forging ahead with its efforts to improve the academic achievement of its littlest learners and high school students. The goal is to close the achievement gap and guarantee that every neighborhood has a quality school – key components of the Vision 2020 plan.

The district’s 29 neediest schools serving mainly low-income children will receive more nursing, intervention and counseling services in addition to a smaller K-3 class size ratio of 24 to 1. (The average K-3 class size for the remaining San Diego Unified schools will be 25.5.) Similarly, district administrators will create an English Learner Task Force to develop a cadre of support for schools enrolling high numbers of long-term English learners.

Most costs in the plan are represented as lump sums accompanied by a list of actions. During a public hearing on June 10, board member Richard Barrera asked district staff to “drill down” budget figures to show how the money is being spent. Throughout that hearing, almost everyone who addressed the board provided little if any feedback about the plan’s goals or actions. Most of the discussion involved requests for more data, more budget figures and more explanations.

San Diego Unified Superintendent Cindy Marten said changing the way the district uses test score and accountability data can lead to “messy” yet necessary conversations. She said the accountability plan publicly acknowledges that using one data point to determine the quality of a school is woefully inadequate. But Marten said the district must work diligently to identify a mix of quantitative and qualitative data to effectively measure the school system’s progress.

“Data can be a weapon or it can be a flashlight,” Marten told board members during the public hearing. “We want the data to be a flashlight to shine the light on the priorities that we agreed to.”

Matthew Yagyagan, a special projects organizer with Alliance San Diego, said in an interview this week that the community advocacy group, along with a coalition of local groups, purposely focused most of its recommendations on the plan’s process, accessibility and implementation. The other groups that advocated for those changes included the San Diego Education Association, the Association of Raza Educators and the ACLU of San Diego and Imperial Counties.

Yagyagan said he was pleased that the district acted on some of the group’s suggestions by producing an executive summary along with a user-friendly guide of the accountability plan. At the alliance’s urging, the district also is working toward making the accountability plan interactive by adding Internet links to additional data and information, like suspension rates.

“We feel that if the process is right, the LCAP represents a clear opportunity to transform the school district into one that meets the needs of all students,” he said. “For San Diego Unified, there’s political momentum to achieve that kind of transformative spirit.”

Aguirre agreed with Yagyagan’s assessment, adding: “It hasn’t been an easy conversation and it’s been challenging at times. But everybody is focused on student achievement and how we support our community together.”

Still, Amy Redding, chair of the District Advisory Council for Compensatory Education Program, said most parents are finding it difficult to provide feedback about the plan because the district “has not exactly been transparent about how it will spend the money.” (Read San Diego Unified’s response to the advisory council’s recommendations and comments here.)

“Isn’t that the whole point of the LCAP and LCFF?” she asked.

While David Yeager, operations manager for the San Diego-based United Parents for Education, acknowledges that the district can’t please everyone with the accountability plan, “no one can tell from this document that they are doing anything differently.”

Yeager, whose son attended San Diego Unified in middle school, said that there is a level of understanding and respect among some parents and community advocates that San Diego is grappling with multiple changes. In addition to the new funding formula, the district is implementing the Common Core State Standards and transitioning to new leadership. Superintendent Marten, a former teacher and principal with the district, has been on the job for one year.

“San Diego is a big ship to turn around,” Yeager said. “The superintendent is trying to right the ship. But parents want what they want now. I don’t know how much longer parents are going to be willing to wait and see.”