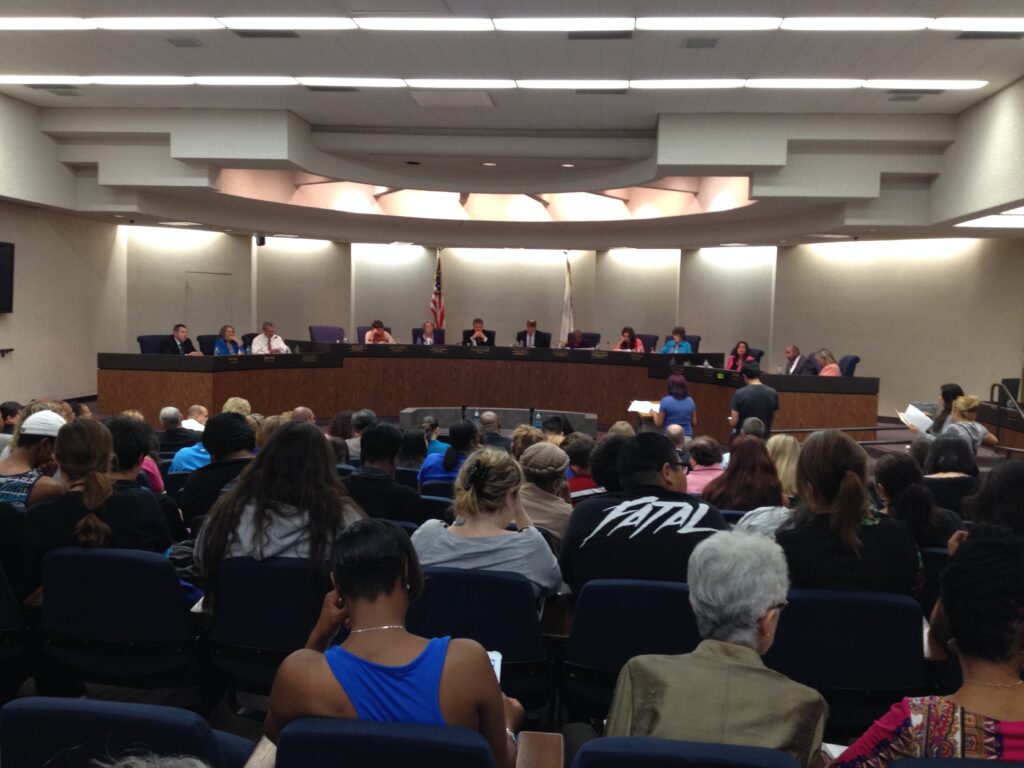 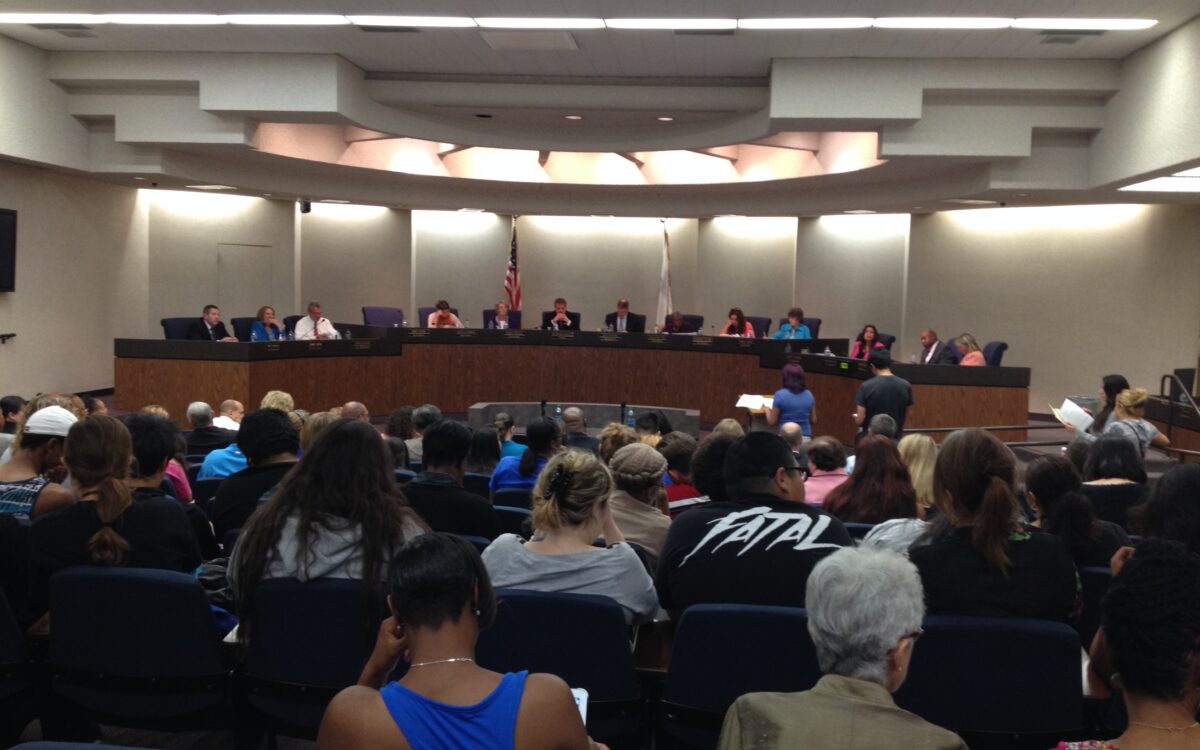 But the very same student data, which district officials used to inform community discussions about how the struggling school system should spend $52.1 million in additional state dollars for the 2014-15 school year, led some parents and community members of this desert city to question the budget priorities outlined in the 95-page proposal.

Some have asked the district to consider redirecting $11.5 million set aside for staff salary increases to support high-needs students. One community group asked board members to invest more money in programs and counselors to keep students out of trouble. And although the district has held more than 35 community meetings about its plan, some parents contend that most people attending those gatherings were staff members.

“If it’s always the same parents and the same opinion, for me it’s not right,” Elizabeth Romero, the parent of five current San Bernardino City Unified students, said during a recent interview. Romero, who also said the district’s meeting times and locations were sometimes inconvenient, added: “If they want to make a difference, they should listen to us.”

“The really great news is that we’ve had more frequent and deeper dialogue with our community than I can remember in 31 years in the district,” he said. “And we now have a better idea of what our community sees as their priorities. And what they want for their children.”

San Bernardino City Unified released the draft of its plan late last month and has been listening to community feedback about the proposal during several meetings over the past two weeks, including a school board workshop and public hearing June 3.

California’s new school funding formula requires all school districts to develop a three-year Local Control and Accountability Plan with community and staff input. The plan, which serves as a district-wide financial and educational guide, must also identify specific strategies that improve services for high-needs students – low-income pupils, English learners and foster youth. Districts must adopt their plans by July 1.

However, before the state’s eighth-largest district can divvy up its budget to address those issues, some of the additional funds being brought to the district under the new Local Control Funding Formula will be used to restore $14.8 million in programs, staff and workdays lost during leaner years, explained Janet King, the district’s director of fiscal services. An additional $26.5 million was allocated to address the deficit for 2014-15 the district projected if Gov. Jerry Brown had not signed the funding formula law.

After taking into account those financial commitments and others, like class size reduction, San Bernardino City Unified opted to allocate some of its increased funding based on students’ ethnicity and race in addition to whether they are English learners or foster youth. Almost all of the district’s 50,000 students (95 percent) are poor, English learners, or foster youth.

King explained that San Bernardino City Unified’s plan recognizes that school improvement efforts must emphasize closing the achievement gap to ensure that all students are college and career ready. In addition to a $3.4 million increase in district-wide allocations to serve English learners, foster youth and African-American and Latino students, a $6.2 million boost in funds, or $230 per pupil, will be given directly to each school based on its demographics.

Terry J. Comnick, the district’s director of categorical programs, said by providing money directly to schools, each site would use a data-based needs assessment to determine how to expand and enhance student services. The site-based strategies must be consistent with the district accountability plan’s goals and each school’s Single Plan for Student Achievement, which is a school improvement plan. Comnick said the principal will work with school site council members, which include parents, teachers and secondary students, to help decide how the funds should be used to increase student achievement.

Vollkommer added that principals will be trained by a consultant this month to learn how to involve their school communities to shape their site-specific plans. He said parents would also receive additional training.

Although the plan calls for boosting funds by roughly a third for both tutoring ($2.3 million) and parent engagement ($1.3 million), specific programs or initiatives are, for the most part, not spelled out in San Bernardino’s current proposal. (Read EdSource Today’s story about pending discussions among lawmakers to examine whether districts should be required to detail how state funds are being used to support high-needs students.)

During the June 3 board workshop, Vollkommer explained that administrators wanted to respect and honor the board’s “ability to craft a budget” before assigning dollars to specific programs.

But Sergio Luna, a parent organizer for Inland Congregations United for Change, a faith-based community organization, said the district’s accountability plan “lacks transparency” because budget figures are “bundled,” without full descriptions of how the money will be spent. The group presented the board with a list of accountability plan revisions during the board meeting last week, including requests to use increased funds for student behavior intervention programs.

After learning that school district police officers issued about 1,700 citations to students for offenses ranging from graffiti to drug possession in 2013-14, parent Ofelia Lopez told board members: “I didn’t know it was this bad.” (District officials noted that not all citations were issued on school property or during school hours.)

While the number of school police citations issued this school year has dropped by almost 50 percent since 2011-12, school board member Barbara Flores said the district should not be satisfied with so many children headed down the “wrong path.” (A new report released last week found that California is leading most states in eliminating harsh disciplinary policies.)

Lopez, the mother of a 10th grader at Middle College High School, said large class sizes could be the root cause of some student misbehavior. The district has not set aside funds to reduce class size in grades 5-12. However, $2.5 million will be spent to decrease K-3 class sizes to 28 students in 2014-15.

“Teachers are trying to do their best,” she said, as board members nodded in agreement. “Kids don’t understand. They don’t care and that’s when they start getting into trouble.”

That’s precisely why Comnick said the district is taking a holistic approach to improve school climate and, in turn, decrease student discipline rates. He said the district is not relying solely on expanding its positive behavioral intervention and support program to keep students in school. Instead, Comnick said ramping up professional development to help more teachers create dynamic lessons to keep students engaged in class and restoring the middle school sports program will play a vital part in improving student behavior. He added that the district would also work to help more parents become involved in all aspects of their children’s education.

“It’s more than just cookies and punch,” he stressed. “We’re building the capacity of parents to become active partners in the co-education of students.”

Before addressing the accountability plan’s priorities for high-needs students, the district budgeted pay hikes of 3 percent for teachers and 4 percent for classified staff, prompting some in the community to question the timing of those decisions.

King, the district director of fiscal services, said teachers and classified staff have not received a raise in seven years. For some positions, including police officers, employees are leaving the school system for higher paying jobs elsewhere in the region, she said.

Robert V. Rodriguez, president of the San Bernardino Teachers Association, explained that contract negotiations were underway well before community meetings were held about the district’s accountability plan. He added that the union did not use the accountability plan to advocate for salary increases and no meetings were held with teachers about the proposal. However, at the union’s urging, teachers did attend community meetings.

Standing in the foyer outside the school board meeting last week, Rodriguez emphasized that the union is not taking a position on the district’s accountability plan.

“We truly believe this plan belongs to the community,” he said. “This is their plan.”