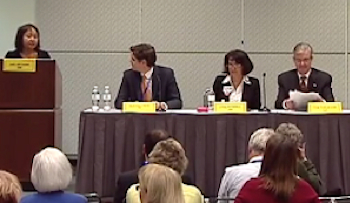 The candidates’ views on charter schools, teachers unions and education reform have turned the race for state superintendent of public instruction into an expensive proxy war between big labor and big donors.

But Tom Torlakson and Marshall Tuck, the two leading candidates, both Democrats, share similar views on the two biggest education initiatives – and challenges – of the decade in California. Torlakson, seeking his second four-year term, and Tuck, the former president and CEO of a group of charter schools in Los Angeles, fully support the state’s new school financing system, the Local Control Funding Formula. And both are firmly behind the Common Core State Standards, which have replaced California’s state standards in math and English language arts.

“The Common Core is a massive shift for our schools and should be a top priority in terms of support for the next two years,” Tuck wrote on his campaign website.

“Embracing Common Core bodes well for the direction we are going,” Torlakson said in an interview this week.

The true contrarian in the race, at least on these issues, is a little-known veteran teacher from the Long Beach Unified School District who also ran in 2010. Lydia Gutierrez, a Republican, opposes both “high-stakes testing” and the Common Core standards, which she criticizes as untested and unproven.

What’s given the race unexpected visibility and bite is that Torlakson and Tuck are on opposite sides of a fault line of education reform – nationally and in California. Tuck believes that teachers unions are too powerful and that “parents should be the biggest voice in education and a threat” to the unions, he said in an interview. He favors curbing teacher tenure and seniority and using standardized scores to some degree for teacher evaluations. He backs the “parent trigger” law, which gives parents of students in low-performing schools the leverage  to demand structural changes, including switching to a charter school.

Until he resigned to run for state superintendent, Tuck ran the nonprofit Partnership for Los Angeles Schools, a group of 17 low-performing schools in the Los Angeles Unified School District that then-Mayor Antonio Villaraigosa took over in 2007. Before that, he opened up nine charter schools in Los Angeles as president of Green Dot Public Schools.

Torlakson, a former legislator, is a close ally of the state’s teachers unions and favors their workplace protections. He opposed the state pursuing a waiver from the No Child Left Behind law, which Tuck supports, in part because a condition required using student test scores for teacher evaluations. The California Teachers Association, in turn, has spent about $4 million on TV and radio ads praising Torlakson and criticizing Tuck. That’s about four times the $1 million and change that Tuck and Torlakson each have raised for their own campaigns. Gutierrez has raised about $30,000.

Tuck has the endorsement of the state’s largest newspapers ­– the Los Angeles Times, Sacramento Bee, San Francisco Chronicle and San Jose Mercury News – which praised his energy and ideas while criticizing Torlakson as being too ingratiating toward teachers unions. But Torlakson has secured the endorsements of a daunting list of players in the state Democratic and education establishment: dozens of county and district superintendents, legislators, labor leaders, members of Congress – all listed on his campaign website.

That list reflects the difficulty Tuck faces in trying to unseat an incumbent state superintendent who reflects the current mainstream in Sacramento on K-12 education: Move forward on local control and the Common Core, move carefully on holding districts and teachers accountable for new standardized tests, and defy the Obama administration if Washington gets in the way of California’s priorities.

The state superintendent is the only statewide elected position that’s nonpartisan, meaning that candidates’ party affiliations aren’t listed on the ballot. Unless one of them gets more than 50 percent of votes in the June 3 primary, the top two candidates will square off again in November.

Torlakson is a San Francisco native and former high school teacher and track coach turned Contra Costa County supervisor. He then spent 14 years as a state legislator before he was elected superintendent in 2010. Torlakson was on board for the big reforms in Gov. Jerry Brown’s first term, although he and his deputies initially complained about the potential lack of state oversight under early versions of Brown’s Local Control Funding Formula. But he was squarely behind it by the time it became law in 2013, even though it accelerated the shift of control over spending decisions from Sacramento and the state Department of Education to local districts.

The funding formula “is a historical shift to give power back to school boards,” Torlakson said at a candidates forum co-sponsored by the California PTA and the League of Women Voters of California in Los Angeles in May. “Districts will be measured on how well they involved parents. We are working with a number of groups on parent training and shared decision making.”

Torlakson acknowledges that the Department of Education must adapt to reflect the new dynamic of local control, and it’s ready to do so, he said. There will be “less emphasis on compliance” and more on working with districts to improve the quality of their programs and share model programs and practices through a new agency, the Collaborative for Educational Excellence.

But Tuck said that the department has shown it’s incapable of doing that well, because it has failed in its primary responsibility to collect the data needed to make those judgments. Low-performing schools have received billions of federal dollars in School Improvement Grants and through the Quality Education Investment Act under a bill that Torlakson sponsored, but, Tuck said, the state did no research to figure out lessons learned and what worked.

“We saw big dollars going to high-poverty schools. Has the state been transparent about the results?” he asked. “What practices did schools use? Change staffing? Adopt a longer day?”

Although money moved to local districts, they still must comply with the 2,300-page Education Code. Tuck said his priority would be reducing the number of regulations, giving districts the flexibility that charter schools have. Meanwhile, the state should be using its authority to issue waivers from the code. And yet, Tuck said, when the San Jose Unified School District and its teachers union asked for a waiver to extend the probationary period for teachers, the state board wrongly voted it down based on Torlakson’s recommendation.

A lot riding on Common Core

Torlakson rolled the dice, jeopardizing tens of billions of dollars in federal revenue, when the state refused to comply with the federal requirement that it test students in state standards in math and English language arts this year. Instead, through Torlakson’s testing bill (AB 484), the state ended nearly all state standardized tests and put the state’s accountability system on hold for at least two years. The state took the position that districts should focus attention on the field or practice test for the Common Core assessments. U.S. Secretary of Education Arne Duncan backed down from imposing penalites, and Tuck agrees that the suspension of testing was the right decision, though he argues that schools and parents still should get a report on the field test results.

How smoothly the Common Core is implemented in coming years will largely determine Torlakson’s legacy. Torlakson pushed for the $1.25 billion last year that gave districts money to upgrade technology, buy instructional materials and train teachers in the new standards, and he’s hoping Brown will agree in budget negotiations to include $1.25 billion more next year. Tuck agrees that it’s critical to “double down” on the Common Core over the next few years.

But it’s every district for itself in the new world of local control, and there’s been no reliable measure of how well prepared schools will be this fall to start teaching the English language arts and math standards for the first real round of Common Core tests next spring.

Torlakson said that, except for a few glitches, the field tests went well and point toward a “smooth transition.” He points to the Common Core resources page on the Department of Education’s website. “We have provided great services with training modules,” he said. “We don’t believe we have all the answers. This will be a state-local partnership.” And the rollout, he said, will take years. “It’s not like flicking on a light switch.”

But Tuck said the state has not implemented the new standards well since adopting them in 2010, and the state is far behind in helping districts prepare for them. “The department has not done a good job sharing resources, and it is hard to find quality resources on the website,” he said. “The state should be doing video chats to support educators in the field, talking about how to create and share lesson plans. Almost nothing like that has been done.”

At the PTA forum in May, candidates were asked what would make the smartest investments in education.

Gutierrez, a master teacher who has taught kindergarten though eighth grades in a quarter-century of teaching, called for eliminating high-stakes testing. She said music, arts and vocational training should be restored in middle schools, “when students start deciding what their future is.”

Torlakson also called for more money for career education, to give students a taste of the work world, and for preschools, because “early learning gives a better start.”

Tuck called for more money to train teachers and principals to be effective. He also supports “parent college” on Saturdays, referring to a program he started to involve parents in their children’s education, and a longer school day to make room for the arts and civics.

Asked in an interview why he should be re-elected, Torlakson cited the progress he has achieved working with Gov. Brown. “We were able to stop the fiscal crisis and are moving forward with exciting reforms for student success,” particularly in establishing partnerships with businesses to advance career education and readiness. (On Friday, he announced $250 million worth of career pathways grants to coalitions of schools and businesses.) He cited the 80 percent overall high school graduation rate last year, a record high, as an indicator of progress.

Tuck points to a different statistic, the increase in the four-year graduation rate from 36 percent to 58 percent in five years at the academically struggling Partnership schools. As the only candidate who has actually run schools, he said, “I saw that when you empower parents, empower teachers to do right by kids, beautiful things happen.”

Forum co-sponsored by California PTA and League of Women Voters with three candidates for state superintendent, May 2014