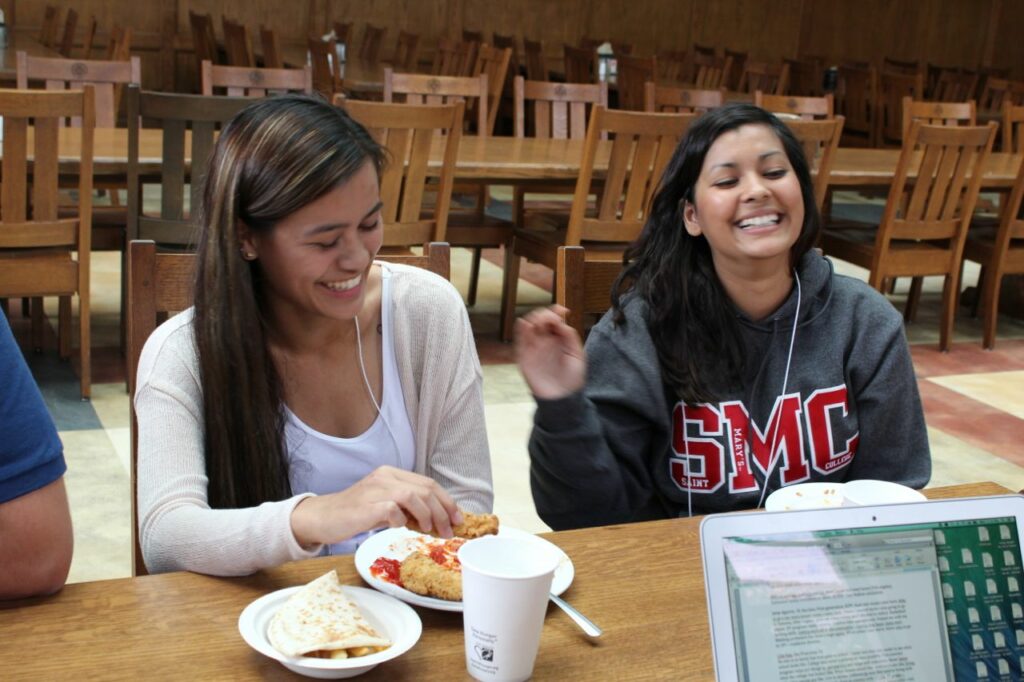 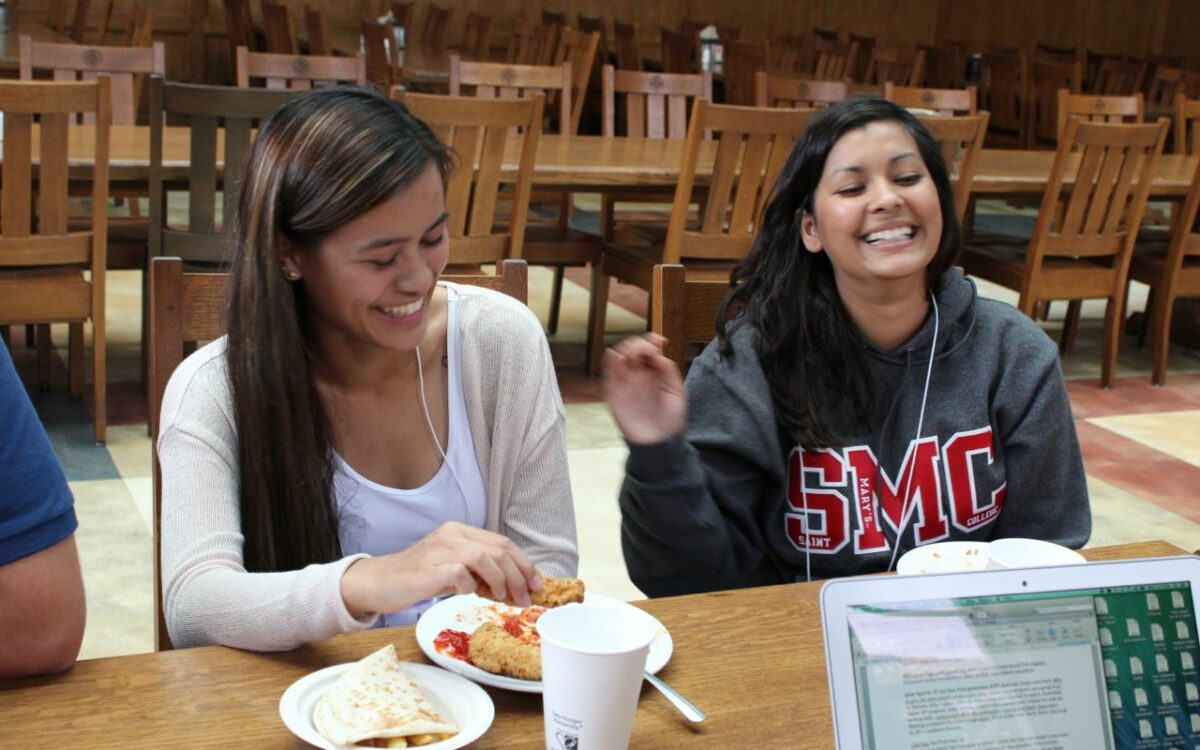 Liv Ames for EdSource
Lilie Hau, left, the first in her family to attend college, enjoys lunch with Shae-Li Villarreal, another incoming freshman, at a summer bridge program at St. Mary's College in Moraga.

Liv Ames for EdSource
Lilie Hau, left, the first in her family to attend college, enjoys lunch with Shae-Li Villarreal, another incoming freshman, at a summer bridge program at St. Mary's College in Moraga.

Lilie Hau, 18, of San Francisco, will be the first in her family to go to college this fall. And thanks to an intensive, two-week summer bridge program at St. Mary’s College in Moraga, she feels ready.

Summer bridge programs and other support during the summer after high school graduation can make the difference in whether graduating seniors who plan to go to college actually enroll. Recent national studies by University of Virginia researchers show that from 10 percent to 40 percent of students, depending on the school district, who are intending to go to college never show up. This phenomenon is called “summer melt.” Students from low-income families or who, like Hau, are first-generation college students are the most likely to melt away. The researchers found that at least one in five of these students is not enrolling.

During that critical summer between high school and college, most students are left on their own to make the transition. Their high school counselors are on summer break, and they have yet to meet their college counselors. If their families are unfamiliar with college, they often have no one to help them finalize financial documents, choose housing or pre-register for classes.

First-generation and low-income students can also feel financial pressure from their families to get a job immediately after graduation. Without adults and friends supporting them, they may be afraid to take such a big step, particularly if it means leaving home.

Bridge programs help freshmen see what life will be like in college and give students a chance to make new friends. At St. Mary’s, students participate in seminars led by college professors, live together in dormitories, and learn how to manage their time. They gather for meals in a Hogwarts-like cafeteria, with high, beamed ceilings, wainscoting and traditional long wooden tables and chairs.

“I never knew what the college life looked like, what the classes would be like, what the professors are like,” Hau said. “I’m not used to living with strangers. This summer program helps put things in perspective and helps with the transition.”

Jennifer Andaluz, director of Downtown College Prep, a charter high school in San Jose that caters to low-income and first-generation students, said dealing with financial issues is the obstacle most likely to derail students.

“Financial aid packages are a mess,” she said. “And they often arrive late.”

Some California State University campuses, she said, send the acceptance letter and the student has to agree to attend before the financial aid package arrives. After the student accepts, the university sends a preliminary financial aid letter. The student then needs to send documents validating income and resources, which often cause the aid package to change. After all this, many students feel so confused that they give up, Andaluz said.

“This is immensely stressful for a first gen,” she said. “They don’t have the capacity to understand the implications of changes.” In some cases, she said, the universities may be offering more funding, but the documents are difficult to interpret.

Then, she added, there are cultural issues.

The charter school employs counselors who are alumni of the school to help students with financial aid, housing and course selection during the summer.

Laura Nuñez, whose daughter attended the school and is entering Chico State University this fall, is grateful for that support. This summer the manager of the student apartment complex where her daughter is going to be living called to say she needed to send in a deposit and the first month’s rent — a total of $1,700 — within a week or her daughter would lose her housing. Nuñez contacted a Downtown College Prep counselor, who called and assured the manager that state aid for the housing had been approved and would be coming soon.

“If it wasn’t for the help of the counselor, I would have had to ask people to loan us money because the housing people weren’t being flexible with us,” Nuñez said through a translator.

Even if students and their families successfully jump these financial hurdles, the aid packages often are not enough to cover all the costs, discouraging some from attending.

“Poor kids have to make tough choices,” said Alicia Dixon, executive director of the Marcus Foster Education Fund in Oakland, which provides scholarships to students. “I’ve known of students who survive on one meal a day because they can’t afford a housing package that includes a full complement of meals.”

St. Mary’s, a private Catholic college east of Oakland, credits its bridge program with helping to keep its summer melt at about 5 percent of incoming freshmen.

In California, public universities individually decide whether to provide programs to help smooth the transition to higher education, making it difficult to determine how widespread and effective these programs are.

Many of the programs that do exist, such as Early Start, are aimed at students who have not tested college-ready in English or math to give them a boost in those skills before they enroll in remedial college classes.

The California Student Opportunity and Access Program (Cal-SOAP), a program of the Student Aid Commission, takes a regional approach to supporting the efforts of low-income and first-generation students to attend college.

A few of the regional groups keep in touch with students after high school graduation to prevent summer melt, according to Patti Colston, spokeswoman for the commission.

One of those groups is the South County Gilroy Consortium, south of San Jose. It offers one-on-one tutoring and counseling to about 1,300 high school students during the school year, including about 450 seniors, said project director Erin Gemar. The tutors and advisers are primarily college students who went through the Cal-SOAP program. With that support, 94 percent of Cal-SOAP seniors in South County enrolled in college last fall.

To try to reach a 100 percent college-going rate, the program offered counseling this summer to 86 high school graduates deemed by their counselors of being at risk of not enrolling or not choosing the best financial package. Data will be available later this year on the success of this initiative.

Gemar used to be a high school counselor.

“It always killed me to come back in the fall and see students around town who had been all set up to go to a certain university,” said Erin Gemar, a project director with Cal-SOAP, of her time as a high school counselor. “There has always been a need for a summer counselor to follow up, but districts have never funded that.”

“It always killed me to come back in the fall and see students around town who had been all set up to go to a certain university,” she said. “They missed a deadline or didn’t pay a dorm fee. There has always been a need for a summer counselor to follow up, but districts have never funded that.”

Downtown College Prep’s Andaluz is urging high schools in her city to work together. In San Jose, she said, there are probably only about 1,000 students each year who are low-income or first-generation and who have been accepted to four-year institutions. The 15 or so high schools in San Jose could get together and provide a center where these students and their families could get help, she said.

The universities’ systems “are not going to change anytime soon,” Andaluz said. “We need to set up a center and start a campaign so kids know they are not in this alone.”

The center staff could send out texts with prompts to remind students of what they need to do. This approach works much better than the lengthy and often confusing emails students receive from universities, she said.

An important aspect of such a center would be connecting students with others going to the same university, she added.

The Marcus Foster Education Fund and other local nonprofit organizations recently organized a daylong event to do just that for college-going seniors in Oakland. Students were separated into groups based on the colleges they would be attending. They discussed their concerns and their excitement, and shared their email and social media contacts so they could stay in touch during their first year in college and beyond.

In the out-of-state group, all students were worried about financial issues, and about half were afraid they would be homesick.

“I’m nervous about leaving home,” said Martha Ronquillo, 18, who will be attending Ohio Wesleyan University in the fall. “What am I going to do when I need something? What if I get sick and need to go to the doctor’s? How am I going to go through these things by myself?”

Zach Calbo-Jackson, 18, will be attending Cornell University. “I’m worried about the rigor of the classes I’m taking,” he said, to nods from others around the circle. “How am I going to balance my class schedule with my social life?”

Ronquillo said afterwards that the daylong meeting with the other students eased her fears.

“We all had similar reasons why we were anxious,” she said. “Now I’m feeling confident and thinking positively. I can’t turn back anymore.”