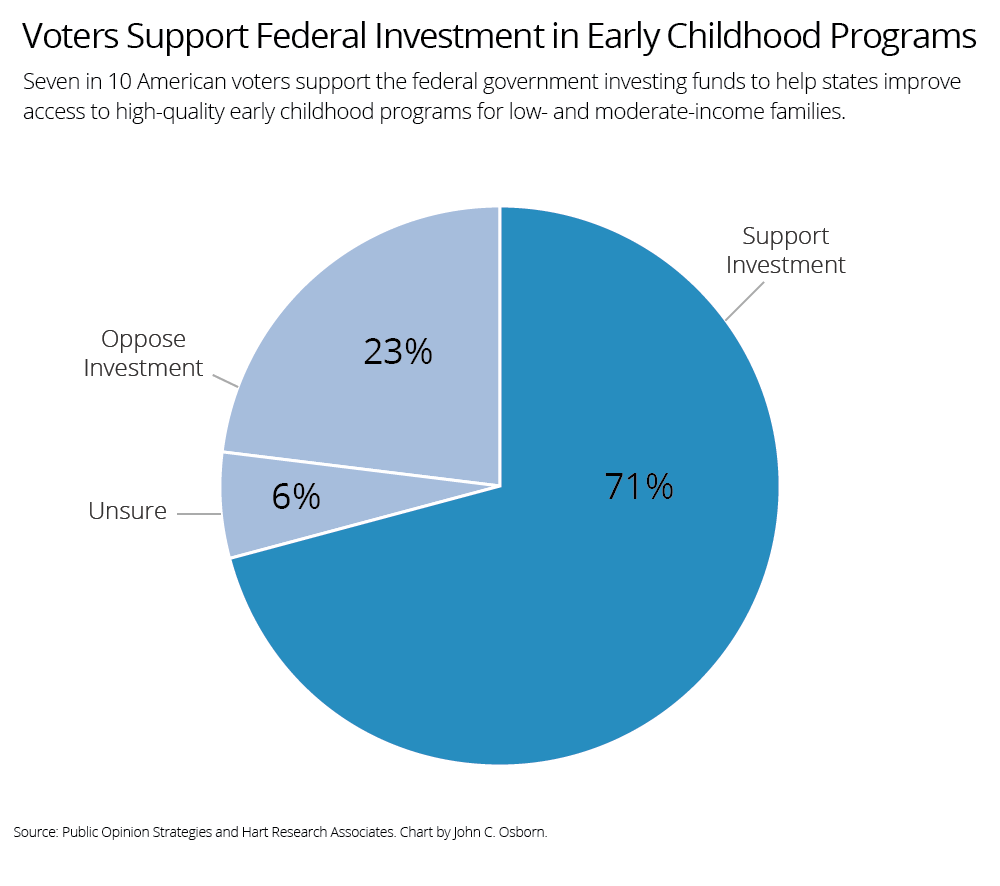 In a new national poll conducted by a bipartisan research team, respondents voiced their strong support for expanding public preschool, echoing other recent surveys on the issue.

Seven in 10 of the registered voters polled in a demographically and geographically representative sample said they supported the proposal before Congress to increase spending on early childhood initiatives. That proposal, called the Strong Start Act, was introduced at the end of 2013. It has gone through one revision and is moving forward in the Senate, but it hasn’t budged in the House.

Here’s how the Strong Start proposal was explained to voters:

“Congress is considering a plan that helps states and local communities provide better early childhood education programs to parents of children from birth to 5. It provides $10 billion per year for 10 years in grants to states to provide all low- and moderate-income 4-year-olds with voluntary access to high-quality preschool programs. It also makes available voluntary programs in high-quality early education and child care for infants and toddlers, as well as home visiting and parent education.”

EdSource commissioned a similar poll in California earlier this year that asked registered voters about their willingness to support an expansion of public preschool in the state. Seventy-nine percent of the 1,000 voters polled said increasing the availability of preschool to 4-year-olds in California was “very” or “somewhat” important. The bill to make pre-kindergarten a universal program in California, which prompted the poll, has since been sidelined.

Kris Perry, executive director of the First Five Years Fund, said she was pleased to see such strong support for public preschool even as “more and more of the country is becoming discouraged about what the feds can accomplish.”

The support for the proposal to expand public preschool held across party lines, with 60 percent of Republican respondents, 68 percent of Independents and 84 percent of Democrats voicing support. Polled voters also said they found it “acceptable” to increase the federal deficit in the short term to pay for the proposal if it paid for itself in the long term “by improving children’s education, health and economic situations, so that less spending will be needed in these areas.”

“It’s a perfect bridging issue,” Perry said. “It has so much voter appeal. It polls so well with retired white men in the South and with Hispanic moms in L.A..”

Recent debates on early childhood education in the House and Senate indicate that many Republican lawmakers are not ready to test the strength of the proposal’s appeal with their constituents by throwing support behind it. The only Republican in Congress to come out strongly in favor of the proposal so far is Rep. Richard Hanna, R-New York, who co-wrote the House version of the bill with Rep. George Miller, D-California.