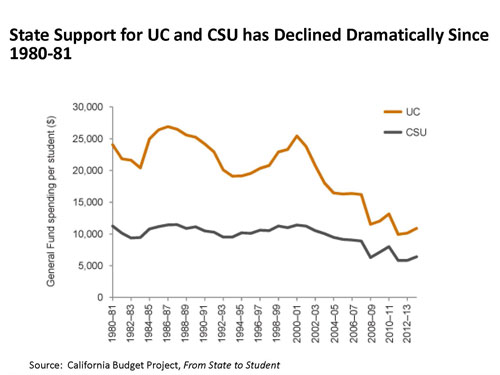 Most Californians say that the state’s public universities are not adequately funded, but an overwhelming majority oppose raising student fees, according to a poll released Monday night by the Public Policy Institute of California. And 56 percent of those polled say they oppose paying higher taxes to maintain current funding.

“Most Californians believe that higher education is very important to the state’s future and that their state government is not providing enough funding for it,” said Mark Baldassare, PPIC president and CEO, in a statement about the findings. “But their concerns do not translate into support for tax increases to fund higher education, and they are even more strongly opposed to raising student fees.”

The University of California Board of Regents voted in November to raise tuition as much as 5 percent in each of the next five years, depending on how much state funding the universities receive. UC President Janet Napolitano argued that the increases were justified because of reductions in state support for UC and the California State University systems since 2000-01. The action was opposed by Gov. Jerry Brown and met with protests from UC students.

The poll in English and Spanish of 1,704 adults throughout the state found that 59 percent think the state’s universities need more funding, but 77 percent oppose tuition hikes. Seventy-six percent said they believed that the public universities are important to California’s quality of life.

The poll also found growing optimism about the state’s economy and strong support for an increase in cigarette and alcohol taxes. A slim majority (53 percent) favors extending the temporary sales and income tax increases under Proposition 30, which are helping K-12 schools and community colleges recover from the recession. Proposition 30, which passed in November 2012, raises about $6 billion to $7 billion per year for K-12 schools and community colleges by raising the sales tax a quarter cent for four years and increasing the income tax for seven years on those earning more than $250,000 a year.

The poll, which was conducted Nov. 10-17, had a margin of error of plus or minus 3.7 percentage points.